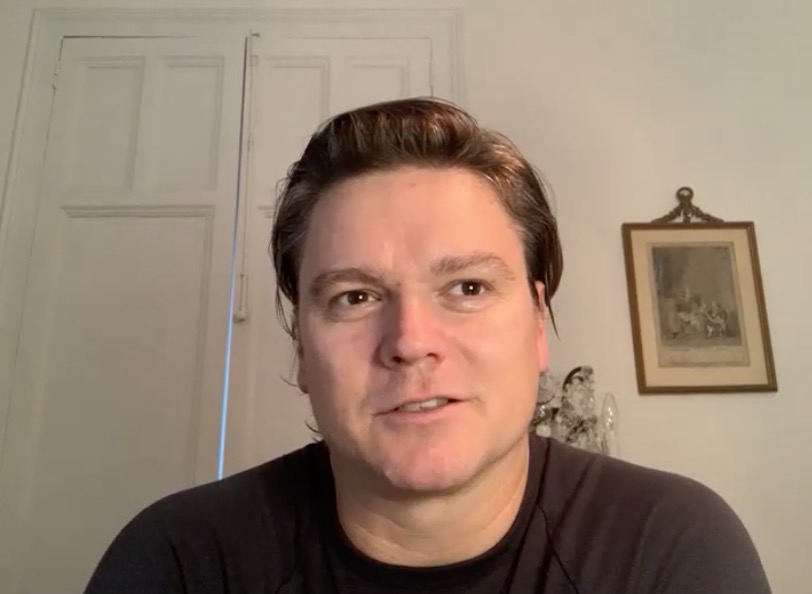 Former ASU Quarterback Goes Viral With Opera Performance on Balcony During Quarantine, But His Story Is So Much Bigger

Former ASU Quarterback Goes Viral With Opera Performance on Balcony During Quarantine, But His Story Is So Much Bigger

In 1996, Gus Farwell was the backup quarterback for the Arizona State Sun Devils. At the time, Farwell was playing behind Jake Plummer, who would, within the next year, enter into the pros.

However, after experiencing tragedy and heartbreak, Farwell left ASU despite it being his time to shine. And at the time, no one knew it yet, but 20 years later, Farwell would bring joy to people around the world from the balcony of his home in Barcelona while the world battled a global pandemic.

“That first night everybody clapped at 8 p.m. And it was really emotional,” Farwell explained to At The Buzzer. “An ambulance drove by and everybody cheered and whistled for the ambulance. I just kind of got caught up in the moment and sang out the last two notes of Nessun Dorma, which is the big aria, and everybody really cheered.”

And eventually it became his thing, the thing he would do to lift others’ spirits up in the midst of hard, uncertain, and unprecedented times.

About a year and a half after leaving ASU to figure things out, Farwell enrolled in Santa Clara University where he was a theater major. After graduating in 2002, Farwell left the states to travel to Europe. It was while he was in Barcelona that he met the woman who would eventually become his wife.

And it was his wife who encouraged him to take what was once known as his “party trick” and make something out of it.

In high school, while at a friend’s house for a party, the athlete and thespian discovered a CD that unlocked a passion and an ability inside of him he didn’t know he had.

“Despite playing football and loving sports, I was always drawn to the arts. And a lot of people think they kind of have to be one or the other, I actually see them as very similar disciplines in a way,” Farwell told At The Buzzer. “When it comes down to how you practice, the intensity, the commitment that it takes to be successful, it’s very similar.”

However, it was Farwell’s senior year that he discovered Luciano Pavarotti‘s greatest hits. “I had never heard opera before,” Farwell remembered of that night. “Something about it just spoke to me. The room kind of melted away and I just had this real visceral response to it. And that’s where it started.”

Farwell’s friend let him borrow the CD, which he still has to this day, and after that, he would drive around and sing-a-long with Pavarotti despite not knowing any of the words, anything about the operas, or the composers, or how hard singing tenor was supposed to be.

“Especially at Arizona State, it was like a party trick. It was this gimmick, the players they just thought it was funny, you know.” In fact, they would stop parties and ask Farwell to mimic a scene from one of the Ace Ventura movies, when actor Jim Carey would open and close the door while singing a big boisterous note.

But as Farwell told At The Buzzer, he believes it was a good thing not knowing how hard it was supposed to be. “Even years later, Plácido Domingo, when I would sing for him, he would say, ‘Your upper range, it’s so easy for you. Maybe it was a good thing because you did know when you started singing that it was supposed to be as difficult as it is.'”

However, because it was opera and because Farwell knew very little about how to use his talent in a professional way, it wasn’t until Farwell met his wife that she encouraged him, telling him “that’s not a joke, that’s not a gimmick, that’s something.”

And while Farwell admits that he is still trying to figure it all out, opera has opened a lot of doors for him. Not only did he perform for Muhammad Ali at one of his Celebrity Fight Nights, but during that same performance, in front of a number of sports greats, actor Tom Hanks threw flowers at him as a sign of respect while the crowd gave him a standing ovation.

And now he’s using his talents to make others’ days brighter while Barcelona is under strict quarantine rules by going out on his balcony every night and singing for his neighbors.

After that first night, Farwell’s wife convinced him to sing the entire song, “and the response was so, people started cheering, and then they started chanting, ‘Otra, Otra!’ ‘Another, Another,’ like we want more. I did not expect that; I was completely unprepared,” Farwell said.

“My 12-year-old went out on to the other balcony and filmed it and my wife posted it. From there it just kind of took off,” Farwell continued telling At The Buzzer. “I was just overwhelmed by the response. And it was the comments that really got to me. In a nutshell, it was basically people saying they’re scared and they just don’t really know what’s going on and a lot of people, their sentiment was, ‘Wow, I haven’t really cried since this began, but now I just cried and I really needed to. Thank you for that.'”

And Farwell plans to keep singing from his balcony until life is back to normal. However, as Farwell quips, his only concern is that his repertoire is only so big.

Aside from the singing, the now-father and husband and his family are keeping busy by taking their dog on walks, cleaning the house, connecting with friends from all over the world through Zoom, and as Farwell tells At The Buzzer, his daughters have found a love of baking they didn’t know they had. “And they proved to be pretty good at it. So we are discovering all these new things to do.”

“We came up with a rule that we’re not allowed to talk about how much time there is left,” Farwell continued. “One day at a time.” And that is something we should all remember to do.

Like Farwell said, “The most important thing is that human beings are incredibly resilient. We’ll get through this like we’ve been through so many other things before. And just keep your heads up, as we say at ASU, ‘Keep your forks up.’ And this will be over before we all know it.”