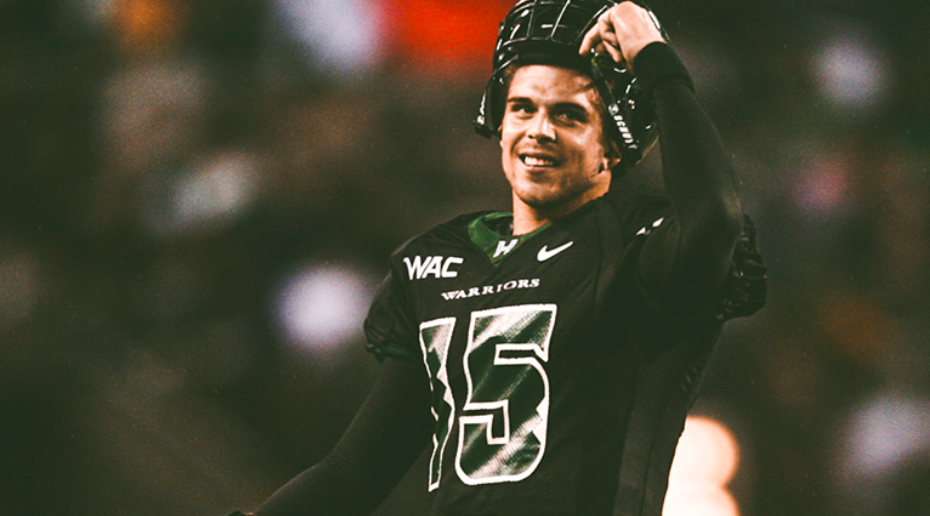 According to the Honolulu Star Advertiser’s Stephen Tsai, “Former University of Hawaii quarterback and 2007 Heisman Trophy finalist Colt Brennan has died, according to his father Terry Brennan. Colt Brennan, 37…was a patient at a rehabilitation facility when he was found unconscious a few days ago. He died on Monday (May 10) at Hoag Hospital in Newport, Calif.”

ESPN (with “information from ESPN’s Mark Schlabach“) reports that “(o)nly hours earlier, Colt Brennan had tried to enter a detox program at an area hospital, but he was turned away because there were no beds available”.

“He was really into it,” Terry Brennan said of the treatment program according to ESPN. “It involved a lot of physical activity and he liked it. He was working with soldiers who had come back from Afghanistan and Iraq with similar problems. He was doing quite well with it for four months. Then something happened and he went to the dark side, and it was just not good.”

“He was doing so well, the spark was back in his eyes, and he was healthy and doing great, and it happened,” Terry Brennan said according to the Honolulu Star Advertiser.

Tsai reported that “Brennan said his son was in the fifth month of a six-month treatment program. Terry Brennan indicated his son left the facility and suggested a drug his son then ingested contributed to his death.”

“Obviously, someone gave him a pain pill of some sort, but it was Fentanyl, according to what we’re understanding,” Terry Brennan said according to the Honolulu Star Advertiser. “We’re still a long way from figuring it out. That’s where we are right now.”

ESPN also noted that: “A 2010 car accident left Brennan with a traumatic brain injury, and that made it difficult to continue his football career. He tried to catch on in the USFL, Canadian Football League and Arena Football League but didn’t stick.”

Brennan’s play at quarterback on the field was something special. Colt was named the 2006 and 2007 WAC Offensive Player of the Year and was awarded the Sammy Baugh Trophy in 2006 for college football’s most outstanding passer.

“Colt Brennan’s run of success from 2005 to 2007 helped put Hawai’i football on the map. He passed for more than 4,000 yards three times, including for 5,549 in 2006. That season, he set the single-season record for touchdown passes with 58. The record was surpassed by Joe Burrow during the 2019 season. Brennan is fourth all-time in career touchdown passes with 131. Brennan finished sixth in Heisman voting in 2006 and third in 2007. The 2007 team finished the regular season 12-0 and 10th in the Associated Press poll before losing to Georgia in the Sugar Bowl. After his time at Hawai’i, Brennan was taken in the sixth round of the 2008 draft by Washington, but injuries prevented him from playing his rookie year, and he was released. He never played in the NFL.”

“Colt Brennan electrified the entire State of Hawai‘i at the peak of his college career with the UH Rainbow Warrior Football team,” Hawaii governor David Ige said in a statement. “He will always be remembered for his brilliance, his leadership and how he and his team brought the people of Hawai‘i together during that exciting and memorable 2007 season. Dawn and I join our community in mourning the loss of Colt Brennan. We send our deepest condolences to Colt’s family and loved ones.”

Prayers up to Colt’s family, friends, and loved ones, that God would fill them with comfort, peace, and strength through the unthinkable.

The University of Hawai’i shared statements from Colt’s family and his Rainbow Warriors family:

Statement from University of Hawai’i Athletics: “It’s hard to put into words the impact that Colt Brennan had on Rainbow Warrior fans and the people of Hawai’i. He was a phenomenal player and provided us some of the greatest sports memories we’ll ever have. But he was more than that. For all that he accomplished on the football field and the adulation he received for it, he always remained among the people. He never turned down an autograph, he never turned down a picture with someone. He inspired everyone, from our keiki to our kupuna. He had a Warrior mentality on the field but a true aloha spirit off of it. Today is an extremely tough day. Our thoughts and prayers are with the entire Brennan ‘ohana and we mourn together with all those across Hawai’i and Rainbow Warrior nation who were touched by Colt.”

Statement from his family: “We know how much the islands meant to him. The Hawaiian people, they were his ‘ohana. He passed away peacefully with his sisters, mom, and dad by his side listening to Bob Marley and with a lei on his chest. He loved Hawai’i and we are forever grateful for all they did for him.”

People from all over are remembering and honoring Colt as well:

“My Sugar Bowl flag flies at half staff today in remembrance of Colt,” @chawancut tweeted. “May you rest in Paradise. You’ll always be in our hearts forever. Mahalo and Aloha #RIP15 #coltbrennan #hawaiifb #GoBows #gowarriors“.

“In memoriam: Rest in Aloha, Colt Brennan,” the Manoa Bookstore tweeted. “He touched so many people and was so gracious with his time and talent. Our thoughts and prayers go out to Brennan’s family. He will truly be missed. #coltbrennan #uhmanoa #manoabookstore #uhm #universityofhawaii #gobows #uhwarriors“.

Our deepest condolences to Colt’s family and friends.