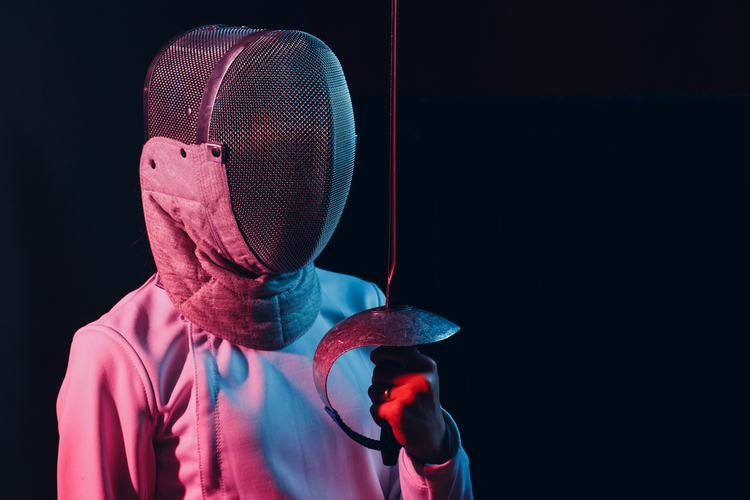 Ann Marsh-Senic, a former Olympic fencer who now works as a doctor at Providence Hospital and St. Joseph Mercy in Michigan. The Olympian sees patients as they’re admitted to the emergency room during the coronavirus pandemic.

Far from the Olympic stage, Marsh-Senic’s responsibilities include preparing and intubating patients as the deadly disease quickly spreads across Michigan and emergency rooms are stressed with the influx in new cases.

Before Marsh-Senic intubates her patients, she wears a filtered helmet to protect her from the virus.

“When I intubate somebody, it’s me and one nurse in the room and the ventilator but everybody else stands outside,” the 48-year-old told explained to the Detroit Free Press.

“I always have a second colleague standing outside the room, in case I have trouble,” she added. “We’re trying not to manually bag the patient because that is thought to aerosolize the virus.”

Marsh-Senic has competed in three Olympics and served as a fencing team captain at the 2016 Rio Games.

In addition to helping people in the ER and her illustrious athletic career, Marsh-Senic is also a married mom with a 12-year-old daughter.

According to The New York Times’ database, the state of Michigan has 45,048 reported cases and 4,343 deaths attributed to coronavirus. The state and parts of the midwest have begun to see an alarming number of cases.

Despite the harrowing numbers, the former Olympic athlete is optimistic about the eventual outcome.

YOU MIGHT ASO LIKE: Kevin Love, Rudy Gobert, Steph Curry Make Large Donations to Those In Need During Coronavirus Shutdown

“Everybody, we’re gonna win,” Marsh-Senic continued. “The world — we’re gonna win against the virus and we’re gonna get a vaccine or treatments or, you know, it’s gonna die out or whatever is gonna happen. But I just don’t know when. We need time, right?”

She continued by saying that her optimism stems from her belief in health care workers who are stepping up to meet the moment.

“I’m honestly so grateful to my colleagues and the nurses at work for coming to work every day, and just making everything as safe as possible,” she said.

Perhaps Marsh-Senic’s participation in the Olympics uniquely qualified her for this fight.

Social distancing and stay at home orders have helped slow the spread of coronavirus in places where they’ve been implemented and observed. s.

However a number of states have begun relaxing these restrictions and Dr. Anthony Fauci, says “states are making a really significant risk by reopening too early, People reports.

So far, the United States has seen over 1 million cases and over 75,500 deaths.

As new cases are reported in the US every single day and the death count rises, it’s hard to share Marsh-Senic’s optimism but we certainly feel that she’s right. Many athletes know how to look ahead and see the big picture for the best play. We certainly hope that this former Olympian is right.

We are thankful for health care workers and people like Marsh-Senic answering the call and helping people in her state.