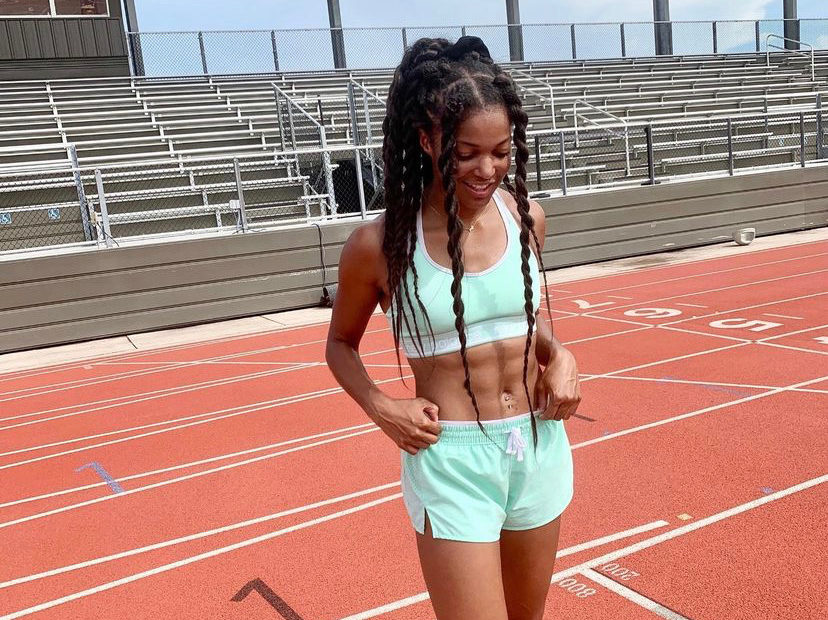 American sprinter, Gabby Thomas, has quickly become a track and field legend after she was crowned as the second-fastest woman of all time to compete in the 200-meter race at the 2020 Olympic Trials. Earning a jaw-dropping time of 21.61 seconds, the athlete clearly proved she meant business.

However, what makes Thomas all the more impressive is finding out that she is a Harvard graduate and focused her studies on neurobiology and global health.

Since as young as seventh grade, superiors of Thomas noticed that she had a special talent for running. She continued into high school as a sprinter and quickly gained notoriety as one of the fastest high school runners in the state of Massachusetts.

Martha McCullagh, one of Thomas’ coaches at her college preparatory school stated, “I remember Gabby running the 100 at a meet and I went over to check her time on the score sheet. She wasn’t recorded. One of the organizers thought she wasn’t in the actual race. When in fact, she was so far in front that she crossed first. She was that special.”

Despite being a national-level runner, the athlete also holds a passion for science. While destined for record-breaking times on the track, the Olympian’s great intellectual achievements were fateful. In 2019, she graduated from Harvard with a neurobiology degree under her belt. According to The Undefeated, Thomas even revealed where her passion for science comes from.

Gabby Thomas says her interest in neurobiology comes from her brothers and track .

“I liked the studies of neurobiology and I feel like it’s applicable to so many things, including track and field,” said the Ivy League graduate. However, the main source of her fascination is attributed to her two brothers. She went on to explain, “I have a twin brother with serious ADHD who was receiving neurofeedback therapy. My other younger brother has autism. I worked in a lab at Boston Children’s Hospital where I studied Rett syndrome, which is a form of autism that’s only present in females. Both of my brothers drew me to neurobiology.”

She additionally recalled the first time she was inspired to pursue public health. Apparently, when she took a freshman seminar about being tired of being tired, the rest was history. Thomas vocalized, “It was about health disparities amongst African Americans in the country. It was the closest thing that Harvard was offering for undergrads related to health policy. Through my mosaic of classes, I learned about the health care industry and the factors that affect people’s health outcomes.”

Yet, her pursuits of higher education did not come with ease. In fact, at times it was rather challenging, the track star admitted. “It was very challenging for me as a freshman. I kind of accepted the fact that I wasn’t going to do track all four years. But then I started to develop better habits. My coach was really helpful and supportive. I just had to learn how to balance.”

With unyielding perseverance and hard work, Thomas rose to be among Ivy League record setters for the 100 and 200-meter races. In 2016, the runner set the record time of 22.38 seconds for the 200-meter in the NCAA nationals. Kebba Tolbert, associate head coach for women’s sprinting, commented, “It was cool for Gabby just to win and beat that caliber of field. The record was a bonus.”

In her undergraduate college career, she won 22 conference titles and set records for both the 100 and 200-meter women’s race. A year before her graduation, Thomas also signed a deal with New Balance in October of 2018. Since then, she has been a machine both on and off the field.

During the track and field Olympic trials in Eugene, Oregon, the runner became the second-fastest woman of all time to run the 200-meter behind the notable Florence Griffith Joyner. The athlete qualified for the Tokyo Games and is currently representing the United States on Team USA.

Now, Gabby Thomas is a Havard graduate, a Master’s student, and an Olympic bronze medalist.

She is undeniably hungry for success and has showcased that she is not a name to be forgotten. The 24-year-old dual athlete and student is currently is enrolled in a graduate program at the University of Texas-Austin where she is seeking out a master’s in public health in epidemiology. Her research focuses on racial inequities in health care and she acknowledges the fact that her work is significant to the bettering of communities.

“As a Black woman in the field, you need someone who has the perspective, who knows what to look for, who understands the importance of addressing these issues and how to implement change. You need people in leadership positions who care about addressing these inequities,” expressed Thomas.

Amazing is a word that doesn’t even begin to describe this student-athlete. After just competing in her first Olympics, her success as a scientist and an athlete will surely not waver anytime soon.