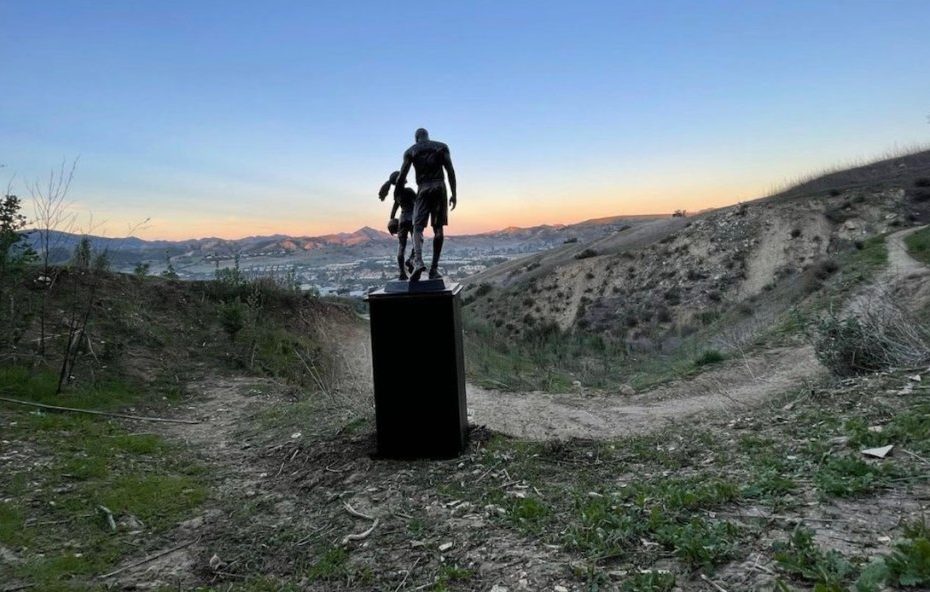 Statue of Gianna and Kobe Bryant Erected at Crash Site

On this day two years ago, the entire world mourned the sudden deaths of basketball legend Kobe Bryant, his daughter Gianna Bryant, and the seven others aboard the helicopter when it crashed near Calabasas, California. The news brought the entire sports community to a halt.

To honor the nine victims that lost their lives that day two years ago, an artist by the name of Dan Medina created a bronze sculpture of Gianna & Kobe Bryant. He pulled the 150-pound sculpture up a steep hill, where it now lays at the crash site. It’s a masterful piece of work.

With that said, the sculpture is only temporary as Medina finishes up a much larger version, which he hopes will stay at the crash site permanently. For now, the statue will likely be removed by Medina by the end of the day – until he can secure permits for the larger version.

RELATED: Sports Legends We Lost in 2021

The base of the statue reads, “Heroes come and go, but legends are forever.” The names of the other seven victims are also found on a plaque on the statue’s base – including baseball coach John Altobelli, the pilot, and all five other passengers. We can’t forget about them, as well.

If Medina can get permission to build the bigger version, it would be the perfect tribute to one of the greatest of all time – not just as a basketball player, but as a friend, father, son, and influencer. It’ll be the perfect way to relive his legacy and honor those that lost their life.

Kobe Bryant Was Larger Than Life

Kobe Bryant enjoyed an illustrious 20-year career in the NBA. He was the 13th overall draft pick out of high school in 1996 and quickly gained the respect of Los Angeles Lakers’ fans all around the world. He averaged 25.0 points, 5.2 rebounds, 4.7 assists, and 1.4 steals per game.

He was an 18-time All-Star, 15-time All-NBA, a five-time champion, two-time scoring champ, one-time MVP, and two-time Finals MVP. His best season came in 2005 when he put up 35.4 points per game. He currently has the fourth-most points scored in NBA history.

Gianna Bryant was looking to follow in her father’s footsteps. She was an accomplished basketball player at the time of her death, despite being just 13 years old. She once declared that she will one day play in the WNBA, showing confidence in herself – just like her father.

For now, Vanessa Bryant (wife of Kobe) is waiting for a trial in a lawsuit against the Los Angeles County sheriff’s and fire department personnel that shared photos of her deceased husband at the crash site. It’s crazy how heartless and disrespectful some people can be sometimes.

YOU MAY ALSO LIKE: Raiders’ Cornerback Nate Hobbs Pleads Guilty to Careless Driving

With that said, we hope to see Dan Medina one day show off his larger bronze sculpture of Gianna and Kobe Bryant – we’ll keep you all updated as we learn more!