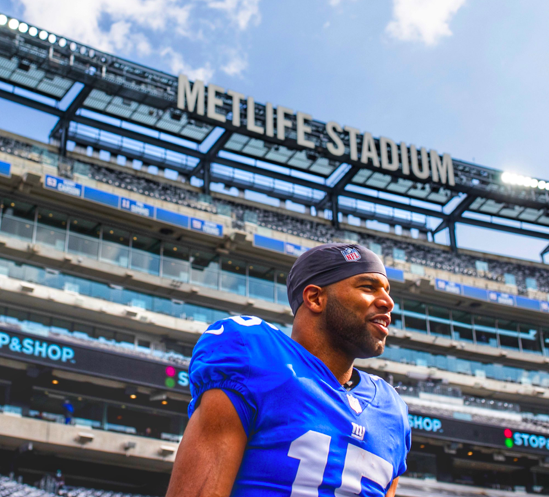 New York Giants’ wideout Golden Tate is a shifty, speedy NFL receiver capable of making a big play and getting yards after the catch. Currently, Tate is averaging over 10 yards a catch with two touchdowns and 226 yards so far in 2020.

RELATED: Tua Isn’t Being Tried Out In Order To See If Dolphins Need to Draft Quarterback In 2021 Draft According To Coach Flores

By in large, those numbers aren’t too shabby. But for the reps Tate is used to in the NFL, he reportedly wants the ball thrown his way more.

“Throw me the ball,” Tate said after making a touchdown catch with 28-seconds left to go in the game on Monday Night Football against the Tampa Bay Buccaneers to put the game within two points. Take a look:

In New Jersey, there are questions if he will play on Sunday against The Washington Football Team and it’s reportedly not because of an injury.

Will Tate start Sunday or was he only helping the team out during practice? There’s no shame at all lining up on the scout team to help out but is there something else going on internally?

“I spoke to Golden at length [Wednesday],” Judge said per Yahoo Sports. “We’re dealing, internally, with a lot of things. We have a walkthrough today, he’s not going to be at the walkthrough today. But he will be back in the building and practicing with us the remainder of the week. It’ll be business as usual. We’re going to deal with this internally and that’s all I’m going to really say about that.”

Judge went on to say, according to Yahoo Sports, that he didn’t notice a lot of what Golden was saying during the game and that there’s “a lot of things that happen within the game that come out afterwards for all players at all positions.”

Judge also talked about wanting to be team first and not tolerating or putting up “with any selfish behavior from anybody, coach or player. It’s not going to happen.”

“I’m not going to put my players on blast publicly. I will criticize them very openly and bluntly in squad meetings. I’m going to hold everybody accountable. That starts with myself. I’m the first one to tell everybody when I screw up because I demand every player to look in the mirror and have the same criticism of themselves…But we’re never going to look at each other and say, ‘That wasn’t your fault.’ Sometimes it is your fault. And sometimes it’s my fault. We’re going to be very open and honest with each other…But we’ve got to correct what happens and move forward without it becoming a distraction that pulls up back throughout the year with external factors affecting our guys internally. So that’s why I do what I do. That’s my philosophy. Again — right, wrong or indifferent — that’s just what I believe in.”

Along with Golden wanting the ball more, his wife agrees and there were reports about her comments watching the game Monday Night. According to SNY, Tate’s wife said, “SO UNDER UTILIZED. AS HIS WIFE I CANNOT EVEN WATCH WITH ONE EYE OPEN!!!! HE NEEDS TO [BE] FED THE BALL. Period. Watch the film.”

Of course, these reports can get over amplified just for a topic on talk radio. So, we will see if Golden is fed the ball more starting on Sunday or if it’s all just that-talk.

The Giants may need him a lot to get those big plays and touchdowns but the jury is out and we’ll see if Joe Judge decides in fact not to play or start him.