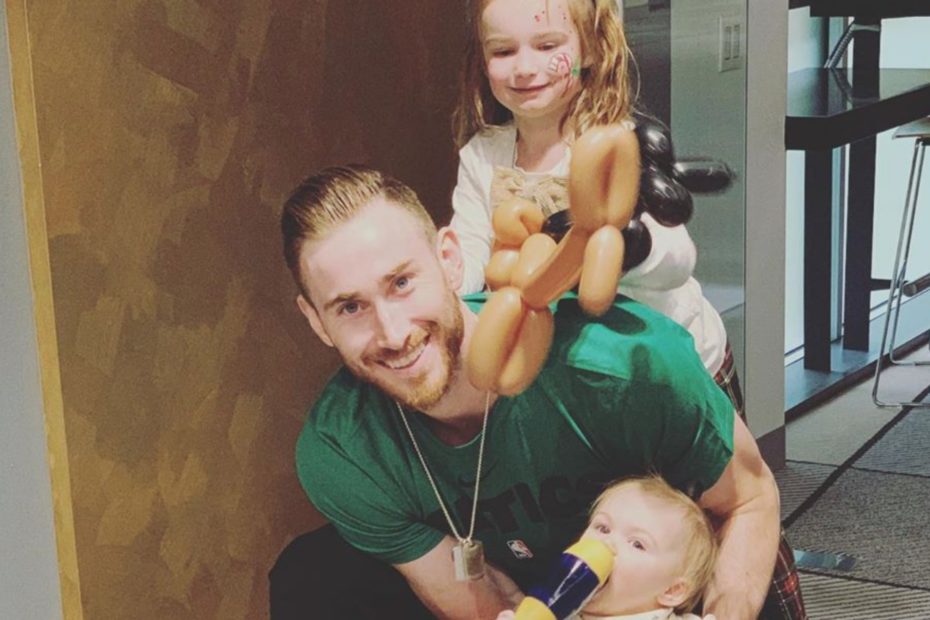 With Gordon Hayward still stuck in the NBA’s bubble as the Celtics continue to compete for a spot in the NBA Finals, Robyn Hayward had to deliver their first son together all on her own. Currently, the Boston Celtics are gearing up for game 5 of the conference finals against the Miami Heat. Boston is trailing 1-3 in the series.

However, while Gordon and his teammates work for a comeback, his wife was working hard delivering their fourth child, the couple’s first son. On September 23, Robyn took to Instagram to announce the birth of their beautiful baby boy.

In her caption, Robyn revealed that because Gordon is in the thick of the playoffs he was unable to be there in person for their son’s birth. “Our little man is finally here! This is Theo, Gordon Theodore Hayward. If you ask Gordon Hayward his name is GT, but if you ask me and the girls his name is Theo. I miss you bunches and can’t wait for you to meet him. We’re ready to watch you tonight!”

Gordon Hayward also took to his Instagram page to welcome his little boy into the world. In the photo that the forward shared, his youngest child is wearing a beanie with the initials GT written on the front of it. “Welcome to the world my little man!”

Earlier this summer, as ESPN reported, Gordon had to leave the NBA Bubble after suffering an injury. It was because of that impromptu time off that Gordon made the decision not to leave the bubble again after returning to it following a successful rehab, according to USA Today.

RELATED: Gisele Bundchen and Kids Get Cheery For Tom Brady as He Gets First Win as a Buccaneer

“I think that, obviously, wasn’t in the plan, getting injured, going back to Indianapolis for treatment. I trust those guys with everything back there. Obviously, a little bit lucky that Robyn was there already in Indy so I got a chance to be at home and get great treatment but that wasn’t in the plan. […] Robyn could be having a baby at any point in time so I think it’s probably something that I’ll be here and, by the time I get back, I might miss the birth if she just goes in and rushes into the hospital. So we discussed it, we prayed about it, and I think it’s probably best if I stay here and help our team.”

If Gordon would have left the bubble for his son’s birth, he would have been required to quarantine for 10 to 14 days, per the NBA’s rules. That means he would have had to miss two crucial playoff games.

Congratulations to the Hayward family!