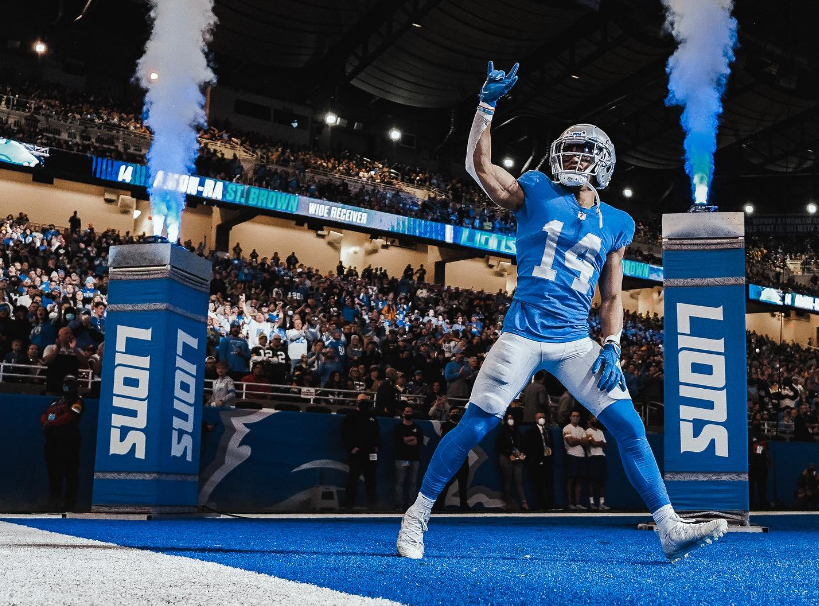 Amon-Ra St. Brown and Equanimeous St. Brown are two of the many brother duos in NFL history. During Week 1 of the 2022 regular season, the two shared a special moment when they scored a touchdown within minutes of each other – though they were playing in different cities.

The first TD came from Amon-Ra – who plays for the Detroit Lions. He caught a four-yard TD pass from Jared Goff in the third quarter of their Week 1 loss to the Eagles. He finished the game with eight receptions for 64 yards and one TD, proving to be the Lion’s No. 1 receiver.

Just two minutes and 14 seconds after that TD, Equanimeous scored a TD in his debut with the Chicago Bears – an 18-yard pass from second-year quarterback Justin Fields in the fourth quarter of their win against the 49ers. It was his only reception of the day, but it was clutch.

RELATED: 25 NFL Stars Likely to Turn Up This Season

Amon-Ra might be the younger brother at just 22 years old, but he’s already off to a better career than Equanimeous. He had 90 catches for 912 yards and five TDs as a rookie for the Lions, and already has 17 catches for 180 yards and three TDs through two games this year.

It’s always nice to see family ties in professional sports, but what these two brothers shared in Week 1 was special. It makes us think back to some of the other notable brother duos in NFL history – there have been quite a few worth mentioning, so let’s see which ones made the list!

His older brother, Sam Cunningham, was the No. 11 overall draft pick by the New England Patriots in 1973 and went on to have a nine-year career in the NFL. He retired with 5,453 rushing yards, 1,905 receiving yards, and 49 total touchdowns – he was a Pro Bowler in 1978.

Shaquill Griffin was a third round draft pick by the Seattle Seahawks in 2017 and has spent the past six seasons in the NFL. In 73 games played, he has 306 tackles, 9 tackles for loss, 1.0 sack, 1 forced fumble, 6 interceptions, and 57 passes defensed. He was a Pro Bowler in 2019.

His twin brother, Shaquem Griffin, was a fifth round draft pick by the Seattle Seahawks in 2018 – a year after Shaquill was drafted by the team. He only started one game over the next three seasons and recently announced his retirement from the game, but will remain close to football.

Michael Bennett was signed by the Seattle Seahawks as an undrafted free agent in 2009 and went on to have an 11-year career in the NFL. He retired in 2019 with 359 career tackles, 132 tackles for loss, 69.5 sacks, 13 forced fumbles, one touchdown, and three Pro Bowl honors.

His younger brother, Martellus Bennett, was a second round draft pick by the Dallas Cowboys in 2008 and went on to have a 10-year career in the NFL. He retired with 433 career receptions, 4,573 receiving yards, and 30 touchdowns. He was a Pro Bowler in 2014 with the Bears.

His twin brother, Ronde Barber, was a third round draft pick by the Tampa Bay Buccaneers in 1997 – the same draft as Tiki – and went on to have a 16-year career in the NFL. He retired with 1,251 tackles, 28.0 sacks, 15 forced fumbles, 47 interceptions, and 12 defensive touchdowns.

His younger brother, Bruce Matthews, was the ninth overall draft pick by the Houston Oilers in 1983 and went on to have a 19-year, Hall of Fame career. He started in 293 games for the Oilers/Titans and was named to 14 consecutive Pro Bowls between 1988 and 2001.

His younger brother, Casey Matthews, was a fourth round draft pick by the Philadelphia Eagles in 2011 and went on to have a four-year career in the NFL. He retired with 114 tackles, 7 tackles for loss, 2.5 sacks, 1 forced fumble, and 2 fumble recoveries – not quite as good as his brother.

Sterling Sharpe was the seventh overall draft pick by the Green Bay Packers in 1988 and went on to have a seven-year career in the NFL. He retired in 1994 with 595 career receptions, 8,134 yards, and 65 touchdowns – including a career-high 18 touchdowns the year before retiring.

His younger brother, Shannon Sharpe, was a seventh round draft pick by the Denver Broncos in 1990 and went on to have a 14-year, Hall of Fame career. He retired with 815 receptions for 10,060 yards and 62 touchdowns. He was an eight-time Pro Bowler and three-time champion.

His younger brother, Britton Colquitt, went undrafted in 2009, but still managed to enjoy an 11-year career in the NFL. He retired in 2020 with 176 games under his belt, punting the ball 834 times for 37,897 yards throughout his career. He was a Super Bowl champ with Denver.

Alright, Rex Ryan and Rob Ryan weren’t NFL players, but they’re worth mentioning due to their impact on the game over the past 30 years. The twins played college football at Southwestern Oklahoma State University and began their coaching careers in college as graduate assistants.

By 1994, they both got hired as position coaches by the Arizona Cardinals. They eventually made their way back to college football, but started to gain notoriety in the NFL in the 2000s. They were both defensive coordinators at one point – Rex was head coach of the Bills and Jets.

John bounced around between coaching gigs in college football before entering the NFL in 1998. He became the head coach of the Ravens in 2008 and has been with the team ever since. He has a career 137-88 record with the team, including a Super Bowl win in 2013.

In fact, he defeated his brother in that 2013 Super Bowl – Jim was head coach of the 49ers at the time. It was the first time two brothers faced off as head coaches in Super Bowl history. Harbaugh has since returned to college football and became head coach of Michigan in 2015.

Rob Gronkowski was a second round draft pick by the New England Patriots in 2010 and went on to have an 11-year career in the NFL. The future Hall of Famer retired after the 2021 season with 621 career receptions, 9,286 yards, and 92 touchdowns. He was a four-time champion.

Rob actually had two brothers that played in the NFL – Dan Gronkowski was a seventh round draft pick in 2009 and Chris Gronkowski went undrafted in 2010. Neither of them played very much or stuck around the league very long, but it’s clear that football runs in the Gronk family.

Zack Martin was the 16th overall pick by the Dallas Cowboys in 2014 and continues to play for the team to this day. He has logged 122 starts since joining the Cowboys – including playing in 100% of the snaps so far this season – and is one of the best offensive guards in the league.

His younger brother, Nick Martin, was a second round draft pick by the Houston Texans in 2016 and currently plays for the Washington Commanders. He had 64 starts in his first four seasons – missing just two games his rookie year – but hasn’t logged a start since. He’s now a backup.

David Carr was the No. 1 overall draft pick by the Houston Texans in 2002 and went on to have a 10-year career in the NFL. He retired with a 23-56 record as a starting quarterback, throwing for 14,452 yards, 65 touchdowns, and 71 interceptions. He never quite lived up to the hype.

His younger brother, Derek Carr, was a second round draft pick by the Las Vegas Raiders in 2014 and remains the team’s starting QB to this day. He has a 57-72 record as a starter, throwing for 32,247 yards, 197 touchdowns, and 88 interceptions. He’s a three-time Pro Bowler.

Another set of twins, Mike Pouncey and Maurkice Pouncey both play the center position and were both drafted in the first round in 2011 – Mike went No. 15 overall to the Miami Dolphins, while Maurkice went No. 18 overall to the Pittsburgh Steelers. They retired together in 2021.

Let’s keep it going with the twins! Jason McCourty was a sixth round pick by the Tennessee Titans in the 2009 draft and went on to have a 13-year career in the NFL. He retired with 744 tackles, 18 interceptions, 3 touchdowns, 108 passes defensed, and one Super Bowl ring.

Devin McCourty was drafted 27th overall by the New England Patriots in 2010. He continues to play with the team and has recorded 909 tackles, 31 interceptions, 2 touchdowns, and 103 passes defensed. He’s a three-time Super Bowl champion – including one with his brother.

His younger brother, Trevon Diggs, was a second round draft pick by the Dallas Cowboys in 2020 and is now playing in his third season with the team. After recording three interceptions his rookie year, he burst onto the scene with 11 interceptions last year – which led the entire NFL.

Jason Kelce was a sixth round draft pick by the Philadelphia Eagles in 2011 and has spent his entire career with the team. Now in his 12th season, he has logged 161 starts at center – including nine full seasons. He’s as reliable as they come and one of the best centers in football.

His younger brother, Travis Kelce, was a third round draft pick by the Kansas City Chiefs in 2013 and has spent his entire career with the team. Now in his 10th season, he has 717 career catches, 9,178 yards, and 58 TDs – 36 of which have come since Patrick Mahomes took over.

Joey Bosa was the No. 3 overall pick by the Los Angeles Chargers in 2016 and continues to play with the team to this day. Now in his seventh season, he has already logged 297 tackles, 75 tackles for loss, 59.5 sacks, 14 forced fumbles, and one Defensive Player of the Year award.

His younger brother, Nick Bosa, was the No. 2 overall pick by the San Francisco 49ers in 2019 and continues to play with the team to this day. Now in his fourth season, he has already logged 114 tackles, 40 tackles for loss, 27.5 sacks, 6 forced fumbles, and Defensive Rookie of the Year.

J.J. Watt was the No. 11 overall draft pick by the Houston Texans in 2011 and has spent the past 12 seasons in the league. Now in his second season with the Cardinals, he already has 549 career tackles, 178 tackles for loss, 103.0 sacks, 26 forced fumbles, and three touchdowns.

His younger brother, T.J. Watt, was the 30th overall draft pick by the Pittsburgh Steelers in 2017 and continues to play for the team to this day. Now in his sixth season in the league, he already has 300 tackles, 83 tackles for loss, 73.0 sacks, 22 forced fumbles, and five interceptions.

Peyton Manning was the No. 1 draft pick by the Indianapolis Colts in 1998 and went on to have a 17-year, Hall of Fame career. He retired with a 186-79 record as starting QB, throwing for 71,940 yards and 539 touchdowns. He was a five-time MVP and two-time Super Bowl champ.

His younger brother, Eli Manning, was the No. 1 overall draft pick by the San Diego Chargers in 2004, but was later traded to the New York Giants – where he spent his entire 16-year career. He threw for 57,023 yards and 366 touchdowns, winning two Super Bowls in the process.

NFL Players With Brothers on the Come-Up

For example, Jaguars’ running back Travis Etienne Jr. has a brother that’s currently a four-star running back in high school. Raiders’ cornerback Trayvon Mullen has two brothers on the rise – one’s at the University of Indiana and the other one is the No. 24 cornerback recruit today.

YOU MAY ALSO LIKE: All the Parent and Child Combos That Have Made an Impact in Pro Sports

Let’s not forget Cody Barton and Jackson Barton – two brothers that currently play in the NFL, who have another brother who’s the No. 24 ranked linebacker in the nation. Zach Wilson, Evan McPherson, and Ray-Ray McCloud also have brothers getting ready to play college football.