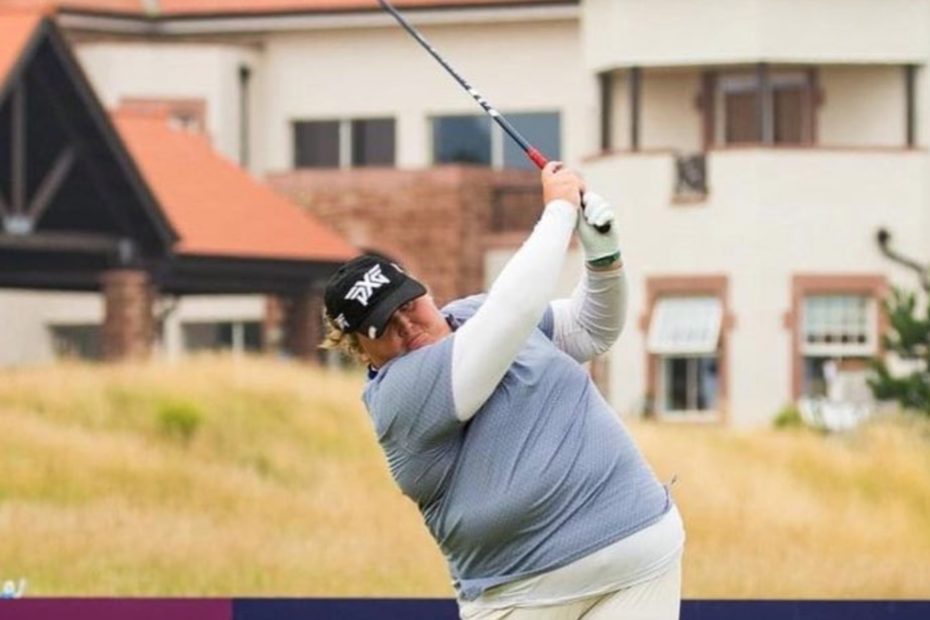 ‘You Be You, Everyone Is Born Different, So Don’t Let Someone Else Control Your Life’: LPGA Golfer Haley Moore Is An Inspiration

‘You Be You, Everyone Is Born Different, So Don’t Let Someone Else Control Your Life’: LPGA Golfer Haley Moore Is An Inspiration

Haley Moore is a professional golfer and a national champion.

RELATED: John Daly Competing With Son Who Signed To Play Golf With The University Of Arkansas At Epic Family Golf Tournament

Moore’s such a prestigious and elite golfer, she also recently got a shoutout from PGA golfer Justin Thomas: “What makes Haley Moore different than most is she’s a lot better than most golfers in the world! Keep doing you, Haley.”

Moore is also known for sinking the winning putt for the University of Arizona at the 2018 NCAA Women’s National Championship, per the LPGA, to get her team the title.

Now, the LPGA golfer is making a difference on and off the golf course.

Not only is she succeeding as a golfer, she’s succeeding at being an advocate for bullies. Moore launched a non-profit foundation where her mission is to:

“Utilize my platform as an LPGA golfer to raise awareness that anyone can achieve any goal they place before themselves. Life is hard. Growing up is hard. Bullying will no longer be tolerated. Let’s ignite your imagination and take a journey together to find the untold greatness in you…What makes YOU different makes YOU stronger
Dream. Believe. Achieve”

“People can cruel but they can also be kind,” Moore said in LPGA’s #DriveOn campaign. “I learned what makes me different, makes me stronger and true confidence comes from within.”

Recently, Moore was on Good Morning America where she told some of her story and why she’s so passionate about ending bullying:

With Moore now being a pro golfer, Good Morning America’s Robin Roberts said Moore’s success didn’t come easy as she struggled with bullying and low self-esteem for most of her life and that peers on the golf course almost made her quit playing golf.

Moore described that as being very hard and that she was very depressed.

But, that didn’t stop her.

“Just putting it aside and just focusing on what my main goal was to get on the pro tour, really, I think just helped me and motivated me from it,” Moore said on ABC 10 News San Diego per GMA.

“I was very lost at one point, I just really did not know what to do…with my life and it was hard,” Moore said on GMA. “I was just grateful to have a great support team with me, with my family and close friends who knew what I was going through and what my friends could see what I was (dealing) with at school.”

“It feels awesome to be an inspiration,” Moore said. “Many people today and kids still go through bullying and…if I could find a way to stop it…it’s not right to do…I hate seeing people struggle with their life. I just feel like if I tell my story to them, they can…hopefully try to have a goal or something in life…that they want to do and be able to achieve.”

Moore said she’s ready to share her story in hopes of it inspiring others.

“I’m just grateful for everything and I’m excited to be out here and playing out on the professional tour and ready to share my story,” Moore said.

The LPGA golfer had three professional wins in 2019 on the Cactus Tour, tied for seventh at the 2019 Augusta National Women’s Amateur, and tied for 11th at the LPGA Q-Series to earn status for the 2020 LPGA Tour season per the LPGA.

Moore’s foundation recently gave a shout out to Tiger Woods‘ 11-year-old son, Charlie, who’s teamed up with his dad in the PNC Championship tournament:

The Haley Moore Foundation needs your help in making a difference in bringing an end to bullying worldwide. If you’d like to help support this incredible cause, you can do so here.