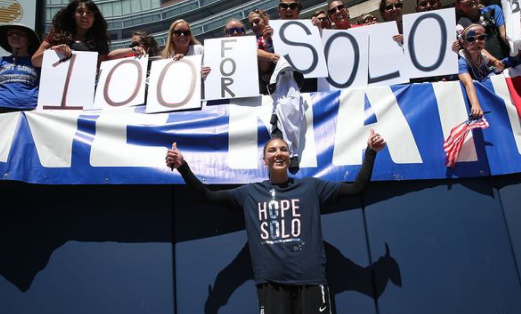 Hope Solo Arrested for DWI With Children In the Car

Former United States Women’s National Team goalie Hope Solo was arrested for driving while intoxicated (DWI) on Thursday. Online records indicate she was also arrested for resisting arrest and misdemeanor child abuse after learning that there were two children in the car.

The incident occurred in a Walmart parking lot in Winston-Salem, North Carolina and she was immediately taken into custody at the Forsyth County jail. No other information has been released at this time, but things aren’t looking good for the two-time Olympic gold medalist.

Solo and her husband, former NFL player Jerramy Stevens, have two-year-old twins together that recently celebrated a birthday. It’s unclear at this moment whether the twins were the children in the car at the time of the arrest. We’re sure to learn more as information is released.

While we haven’t heard from Hope Solo, we have heard from her lawyer, Rich Nichols, and they’re claiming that there’s more to the story than meets the eye. Here’s what he had to say:

“On the advice of counsel, Hope can’t speak about this situation, but she wants everyone to know that her kids are her life, that she was released immediately and is now at home with her family, that the story is more sympathetic than the initial charges suggest, and she looks forward to the opportunity to defend these charges.”

This Isn’t the First Time Hope Solo Was Arrested

Although it’s been a while, this isn’t the first time Hope Solo has been arrested. The star goalie was arrested back in 2014 on two counts of fourth-degree assault – one against her half-sister and one against her nephew. Solo also threatened a police officer during the same incident.

Solo alleged that she was defending herself from her nephew, who was 6-foot-9 at the time. After several years of dismissing and reinstating the charges against her, everything was eventually dismissed. She was never charged with anything and all charges were dropped.

It’s unlikely that the same thing will happen with her latest incident. Driving while intoxicated with children in the car is a serious offense and it’s something that comes with heavy consequences. While we’re glad everyone’s okay and healthy, this isn’t something we can just shrug off.

With that said, we do know that Solo was released from the Forsyth County Jail immediately and is now at home with her family. This won’t be the end of this incident and more details of what went down are sure to follow in the coming days and weeks. Follow along for updates!