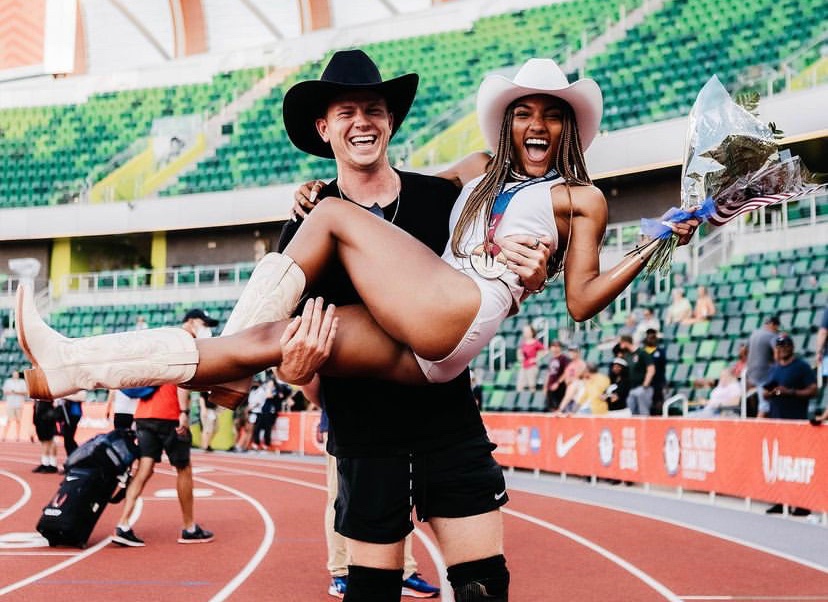 Hunter Woodhall and Tara Davis, an Amazing Paralympic/ Olympic Couple, are Headed to the Tokyo Games

Twenty-two-year-old veteran Paralympian, Hunter Woodhall, has qualified for next month’s Tokyo Paralympics. According to his former school, the University of Arkansas, Woodhall won the 400-meter event at the Paralympic trials in Minneapolis with an impressive time of 49.87.

While Woodhall’s performance was nothing short of incredible, what is perhaps equally incredible is the fact that Woodhall’s girlfriend also qualified for the Olympics. Tara Davis, a track and field athlete, qualified for next month’s Games in the women’s long jump competition, as said by her alma mater, the University of Texas at Austin.

See Woodhall’s reaction to his girlfriend earning an Olympic opportunity!

In an Instagram post that celebrates the achievement of Davis, Woodhall writes in the caption, “TARA LANE DAVIS YOU ARE AN OLYMPIAN! I am so unbelievably proud of you, not just for what you did out there last night but for who you are.”

Woodhall also added, “You have fought through more this year than some do in a lifetime. You deserve this more than anyone, and I am so grateful I get to watch you create your legacy. TOKYO HERE WE COME!”

This will be Woodhall’s second time competing at the Paralympics, as he participated in 2016 at the Rio de Janeiro Games and won silver and bronze medals. However, his journey to the Games was not easy by any means.

“I was born with a congenital disease called fibular hemimelia, which means my lower legs never formed. My parents made the scary decision to follow the doctor’s recommendation and amputate my lower legs when I was 11 months old,” wrote Woodhall in an essay published by Team USA.

He continued with the statement, “I didn’t let that keep me down. Thanks to the terrific support of my parents and siblings, I participated in several sports. They were all fun, but eventually I kept going back to running.”

His Instagram bio even holds the sentiment, “They said I’d never walk, so I learned to run instead.”

Woodhall’s hard work and dedication have led him to earn a position on the United States Paralympic team. Likewise, his girlfriend also shares a passion for track and field and even holds the title of American junior No. 2 performer for the 60-meter hurdles, according to USA Today.

The world can watch Tara Davis and Hunter Woodhall perform in the Tokyo Games over the next few months. The Olympics will occur from July 23rd to August 8th, and the Paralympics will follow soon after from August 24th til September 5th.