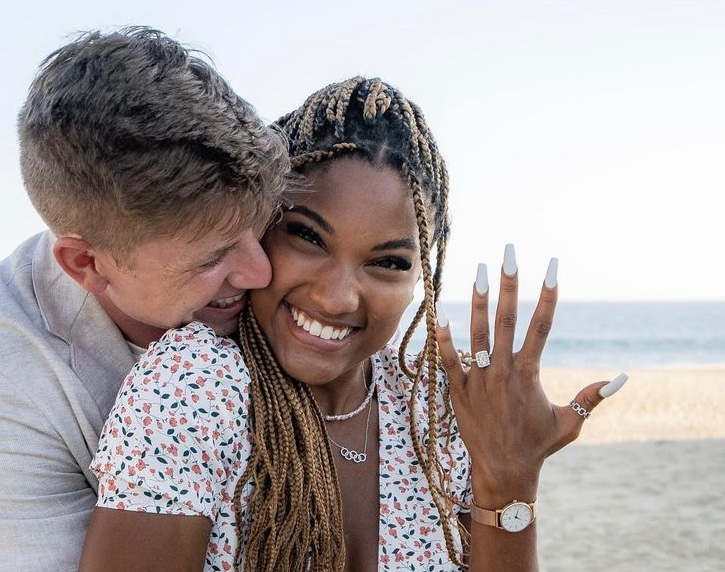 Hunter Woodhall is known for his incredible performance on the track considering he is a two-time Paralympic sprinter who proudly has three medals. Yet, people also recognize that he is in a power couple with fellow Olympic sprinter, Tara Davis.

Fans have followed their well-documented relationship and will be ecstatic to know Woodhall finally popped the big question and are officially engaged. The couple, both 22 years of age, initially met in college during a competition. While Hunter represented a college in Arkansas and Tara for Texas, they both took the nation by storm with their ability to compete.

Soon after their relationship bloomed, they began sharing their love for each other across social media platforms. Hunter himself has surpassed 3 million followers across his platforms, ranging from Instagram, TikTok, to Youtube. However, most people recognize that a reason for their relationship being so special is because they are both Olympic athletes.

Davis made her Olympic debut this year and placed sixth in the women’s long jump competition in Tokyo. The 2020 Olympics marked Woodhall’s second competition as a paralympic athlete. In 2016, he brought home a silver medal for the men’s 200m event and this year, he earned bronze during the 400m.

Incredibly, the pair have the special ability to support each other through their careers, understanding from a first-hand account the difficulties of professional athleticism.

Hunter Woodhall gets creative with his documented engagement!

Yesterday, the Paralympic star shared to his TikTok audience his plan for the engagement, making the video six hours before he asked the big question. As each hour passed and the clock was ticking, he would record his empty hand with the number of hours until the event. When the time finally came time, he showed a video of his fiancee with her new ring enjoying the beaches of Cabo San Lucas, Mexico.

RELATED: Professional Boxer Manny Pacquiao Experiencing His Most Difficult Match: Running For President in the Philippines

Davis took to Instagram to announce the exciting news. In the caption, she noted the happiness her partner has brought her over the years and wrote, “You’ve showed me the true meaning of life and now I get to spend the rest of my life with you. let me reintroduce myself as a FIANCÉ.”

He continued on and explained using the beautiful phrase, “You make me a better person and I can’t imagine a life without you. Thank you for trusting, supporting, and loving me the last 5 years. here’s to the rest of our lives.”