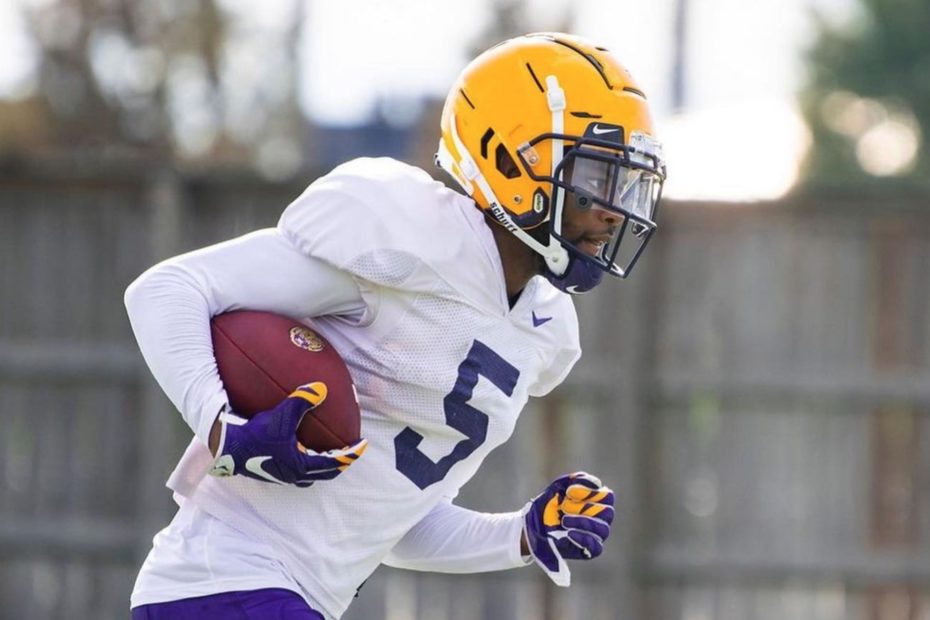 LSU Football freshman wide receiver Koy Moore took to Instagram to share the experience he had with some of the Baton Rouge Police officers on Saturday evening. Moore said he was approached by multiple policemen and that they pulled out guns on him.

He said their firearms were drawn after the officers “assumed (he) had a gun and drugs” while “screaming, ‘where’s your gun?'” An investigation has since been launched by the Baton Rouge Police Department and the officers involved have been placed on paid administrative leave.

RELATED: Memphis’ Star Running Back Reveals His Decision Not to Play for the Tigers After Losing Multiple Family Members to COVID-19

LSU didn’t have a game on Saturday. The incident supposedly happened in the same city where LSU’s campus is located, Baton Rouge, Louisiana.

Moore said if he “didn’t tell those incompetent officers that I was a LSU football player there’s…no telling if I would’ve been here to tell the story!”

“Last night I was approached by policeman they pulled guns on me assuming I had a gun and drugs, (screaming where’s your gun?) I was violated numerous times even as going as far as trying to unzip my pants in search of a weapon that I repeatedly told them I did not have . As I tried to go live for video documentation of the harassment they snatched my phone I could’ve lost my life and I know for a fact nothing would’ve happened to the guys who did it.. as some celebrate the election of a new president understand the real problem have not changedIf I didn’t tell those incompetent officers that I was a LSU football player there’s is no telling if I would’ve been here to tell the story! Yesterday wasn’t a victory for America it was only a distraction.

The Baton Rouge Police Department issued a statement on Monday.

“On Sunday, November 8, 2020, Baton Rouge Police Department was made aware of a citizen complaint posted online by LSU football player Koy Moore. Chief Paul made contact with an LSU Official and spoke with Koy concerning the complaint. Chief Paul initiated an Internal Affairs investigation into this matter. The three officers involved have been placed on paid administrative leave while the incident is under investigation…”

“As in every case, we will be collecting all available evidence and conducting interviews. Accountability and transparency are critical in building trust with the community. I pledge a thorough investigation into this complaint,” the chief continued.

Moore’s former LSU teammate and fellow wideout Ja’Marr Chase said, “It happened to me before to bro. Something we have no control over. Be safe.” Chase, according to ESPN, opted out this season to focus on turning pro.

“Have faith and prayers that things (will) begin to get better,” one supporter commented. “All we can do is stand up for those that can’t stand up for themselves. I am so incredibly sad that this happened to you.”

“While I cannot comment on the investigation, what I can say is that we must work collectively to embrace our differences,” LSU head football coach, Ed Orgeron, said. “We have to listen, learn and come together to combat social injustice and racism if we are to create a safer and more equitable society for all people.”

“Glad you’re safe, bro,” Jerit Roser, a Louisiana sportswriter, who covers LSU football, said. “And so sorry you had to go through that…you’re right that no election solves all problems…Situations like what you described happen way too often. Too many people lose their lives and loved ones. And you shouldn’t have to think or wonder whether your football ability is the only difference in your story. It shouldn’t matter…The problems we have with this in this country are disgusting. We’ve got to do better.”

And even more supporters encouraged Moore, saying they are glad he’s speaking up and sharing about his encounter with the police. “Thank you for speaking out…your words and your life are so important to everyone around you! Thank you, Jesus! Praying for our country…and those who are in it!”