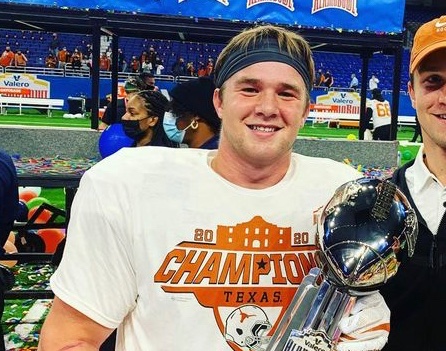 University of Texas Longhorns linebacker Jake Ehlinger, unfortunately, passed away in May of 2021 at the young age of 20. Only now has his family spoken out and revealed that his cause of death was due to an accidental overdose. He was believed to have taken Xanax laced with fentanyl.

Since the harrowing incident, the Ehlinger family has spoken out in hopes to raise awareness about substance abuse and “the spread of counterfeit pills” as an epidemic within the United States.

In a statement released by ESPN, the family shared, “Jake was a victim of an accidental overdose of what was believed to be Xanax laced with toxic drugs including deadly Fentanyl. The spread of counterfeit pills is an ongoing and significant issue throughout our country, particularly in schools, colleges, and universities.”

“As our family continues to process Jake’s death, we felt it was important to share these details with the hope that Jake will not have died in vain,” the linebackers family included. The Ehlinger’s shared that they hope by sharing Jake’s experience, other families will not have to suffer the way they have. They stated, “We pray that sharing Jake’s story will help shed light on this problem and prevent other families from also tragically losing a loved one.”

“Our hearts are broken, and we are still grieving over the loss of our son and brother, Jake,” the family continued. “We are overwhelmed by the outpouring of love and support received since his untimely passing in May.”

Remembering Jake Ehlinger and his impact on the University of Texas

Although his playing career was short, the impact he had on the University of Texas will live on forever. The younger brother of Indianapolis Colts quarterback Sam Ehlinger, Jake played two seasons with the Longhorns and was projected to go far in his career.

“Jake was a tremendous person and was everything you could ask for in a student-athlete,” Texas coach Steve Sarkisian commented in a statement. “Being a Longhorn meant everything to him, and he truly embodied all that it means to be one.”

UT Athletics Director Chris Del Conte also shared a personal statement, discussing how Jake’s death impacted the team. Del Conte described himself as “truly broken” and “devastated” over the loss of one of his student-athlete. He explained, “Jake was an amazing young man from an extraordinary family with such a bright future ahead of him. It’s just such a tragedy that we are all really struggling with.”