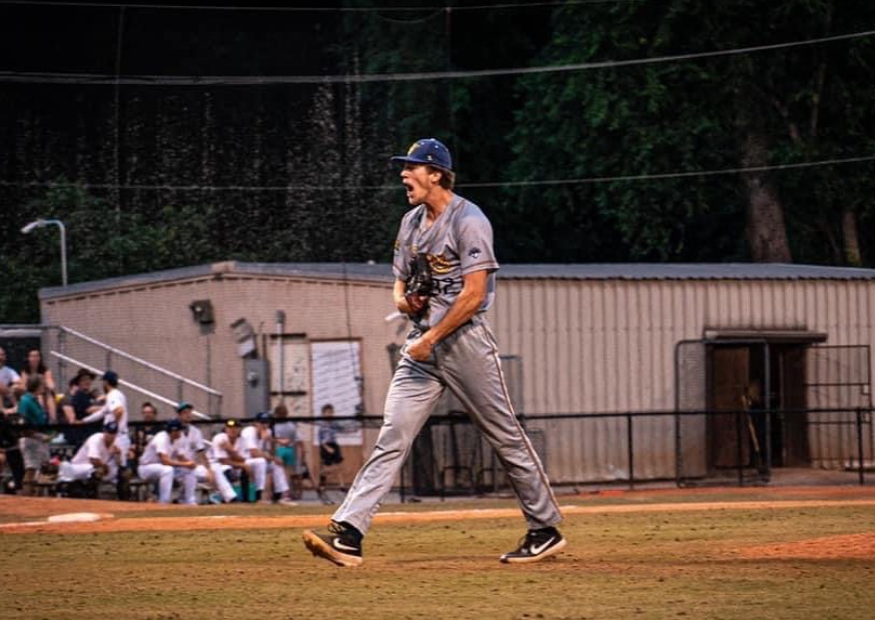 The Baltimore Orioles were eyeing history with their 13th round pick in this year’s amateur draft, selecting pitcher Jared Beck out of Saint Leo University. If he were to make it to the major leagues, he would become the tallest player in MLB history – the 22-year-old is listed at 7’0’’ tall.

Beck finished the 2022 Division II collegiate season with a 4-4 record in 13 starts, throwing a 3.95 ERA and 105 strikeouts in 68⅓ innings pitched – that’s 13.8 strikeouts per nine innings. His efforts didn’t go unnoticed, being named to the All-SSC second team during the 2022 campaign.

He also played nine games for Saint Leo in 2021, as well as 13 games with the Savannah Bananas – where he became a hot topic for their heavy presence on social media. Beck also has a history with basketball, golf, and even tennis while at Davenport North High School.

Jared Beck has an opportunity to do what no other seven-footer has done – play in the major leagues. Loek van Mil (Minnesota Twins) and Ryan Doherty (Arizona Diamondbacks) – both of whom stand 7’1’’ – made it to the minor leagues, but never made that jump to the majors.

The good news is Jared Beck has his sights set high, often speaking of his admiration for Hall of Fame pitcher Randy Johnson – who was 6’10’’ and is one of the tallest MLB players of all-time, but we’ll get to that in a second. What’s important is that Beck is studying all the right pitchers.

While Jared Beck would be the tallest to ever play, he hasn’t quite gotten there yet. While we wait to see if he can take that next step towards the major leagues, let’s take a look at some of the tallest baseball players to ever play in the MLB – it’s no NBA, but you’ll be surprised.

Ryan Minor was a 6’7’’, 225-pound third baseman who played four seasons in the major leagues between 1998 and 2001 – three seasons with the Baltimore Orioles and one with the Montreal Expos. He finished his career with a .177 batting average and 56 hits, five home runs, 27 RBIs, and 30 runs scored in 142 games played. He never played more than 55 games in one season.

Chris Martin is a 6’8’’, 225-pound relief pitcher who currently plays for the Chicago Cubs. Currently in his seventh season in the major leagues, Martin has a 6-15 career record in 243 games played and 226.1 innings pitched. He has thrown 227 strikeouts and has a career 4.10 ERA. He recently won the 2021 World Series with the Cubs, where he threw two strikeouts in 2.1 innings pitched.

Brad Wieck is a 6’8’’, 257-pound relief pitcher who currently plays for the Chicago Cubs – that’s right, he’s teammates with another pitching giant, Chris Martin. Currently in his fourth season in the major leagues, Wieck has a career 2-2 record in 65 games played and 59.2 innings pitched. He has thrown 89 strikeouts and has a 3.77 ERA. Unfortunately, he’s on the 60-day IL.

Tyler Glasnow is a 6’8’’, 225-pound starting pitcher who currently plays for the Tampa Bay Rays – though he’s on the 60-day IL right now. He has a 5-2 record this season and a 16-4 record in the past three seasons, which is an improvement after going 4-16 in his first three seasons. Unfortunately, he has struggled to stay healthy and has only played 37 games since 2019.

Andrew Brackman was a 6’10’’, 230-pound pitcher who played just three games with the New York Yankees during the 2011 season. He pitched 2.1 innings, walking three batters and allowing one hit. He never surrendered a run, but that was all the MLB action he would receive. Brackman is a former two-sport athlete at North Carolina State University, playing basketball and baseball.

Aaron Slegers is a 6’10’’, 260-pound relief pitcher who currently plays for the Tampa Bay Rays – that’s right, Tyler Glasnow isn’t the tallest player on the Rays. Slegers is in the midst of his fifth season in the major leagues. He has a 3-4 record in his career, throwing a 5.46 ERA and 59 strikeouts in 89.0 innings pitched (49 games played). He hasn’t played in 2022 yet, due to injury.

Sean Hjelle is a 6’11’’, 228-pound relief pitcher who currently plays for the San Francisco Giants. The 25-year-old is seeing his first look at the major leagues this season and has already appeared in three games – he has a 0-1 record, 9.00 ERA, and nine strikeouts in 6.0 innings pitched. Only time will tell if he settles into a permanent role with the Giants, or another team.

What’s Next for Jared Beck and the Baltimore Orioles?

Jared Beck was one of seven pitchers selected by the Baltimore Orioles in rounds 11-20 of this year’s amateur draft – they drafted 12 pitchers overall. While he dropped to the 13th round, he’s getting more media attention than any of the other pitchers drafted by the Orioles this year.

“Obviously, he’s a little bit of a bigger guy, and that might take a little bit more, I guess, in terms of delivery, refining his mechanics. But we have faith in our player-development staff, our pitching coaches, that they’ll be able to get the most out of his ability,” said Orioles Draft director Brad Ciolek.

He certainly has a lot of upside. Aside from his size, he has a fastball that currently gets up to 95 mph – and will only get better with the right coaching. He also has a breaking ball and changeup that could use some work, but the arsenal is there. All he has to do now is make something of it.