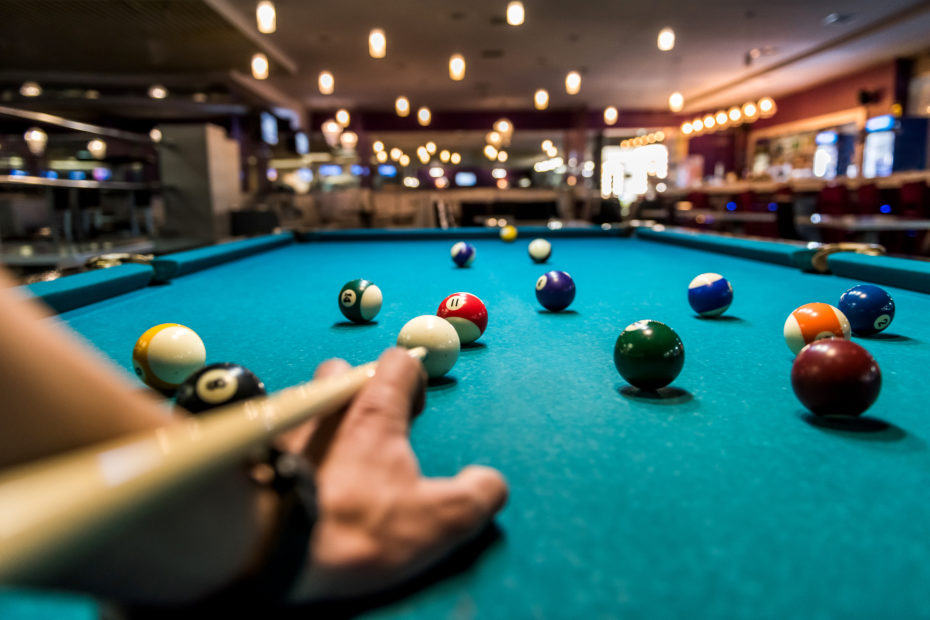 Billiards is a game that has been around for hundreds of years and you can tell just how much the game has evolved by all the jaw-dropping trick pool shots on the internet today. People from all walks of life gather to play this wonderful game, but not everyone can nail trick pool shots.

The history of billiards, also known as pool, dates back to the 15th century – though back then it was more similar to croquet and was played on the lawn. It wasn’t until they brought the game indoors, added a border and the pockets, and made the surface green to resemble grass.

Over the years, the game has evolved and there are now three major variations of the sport – billiards (three balls), snooker (22 balls), and pool (15 balls). Most people that play for fun or at the bar are likely used to playing pool, but the pros often venture out into other variations.

RELATED: 20 Hottest Baseball Players to Watch Out for This Year

There are so many different ways to enjoy the game of billiards. Not only are there several variations to choose from, but not everyone is interested in the traditional ways to play. In fact, most fans today get a much bigger kick out of watching trick pool shots than anything else.

These are the shots that are elaborately set up beforehand and often feature a number of obstacles that the billiards player must overcome. It doesn’t necessarily have to involve a ball going into the pocket. Many players get creative with their trick pool shots, which we love!

10. The Cat Comes In Clutch With the Paw Shot

I want to start with this trick pool shot because it’s funny, cute, surprising, and just goes to show that you truly never know what might happen in the game of billiards – even if you fail. And that’s exactly what this billiards player did – he failed. Well, that is until his cute kitty showed up.

They say teamwork makes for the best work and that’s what I see in this shot. At first, I thought for sure he was going to hit the red ball in the pocket, but he missed. His cat, doing what cats do best, felt obliged to join in and help. In doing so, the cat pushes the ball inside the pocket.

Not only that, but the cat knew to only put the red ball in the pocket – not the cue ball. Whether you’re a cat person or not, this is cute and it’s a great way to start off this list. It might be an unconventional trick shot and who knows if it was expected in that moment, but I’m here for it!

9. Efren Reyes Shows Why He’s One of the Greats

Efren Reyes, also known as ‘The Magician,’ is widely regarded as the greatest pool player of all-time. He’s known for seeing shots that no one else sees and making shots no one else can make. He became the first player to win the WPA World Championship in two pool disciplines.

In this video, we see Reyes with a 6-2 lead over his opponent. All he needs to do is tap the 10 ball into the corner pocket to win the game. Instead of taking the easy shot, he decides to call the side pocket – a decision that had me perplexed, but I know better than to doubt Reyes.

8. Mostafa Khadem With Some Magic for You

Mostafa Khadem, also known as ‘Ottana,’ is an artistic pool player that is known for his creative and unique trick shots. He also has a Masters of Business Administration from Allameh Tabataba’i University (ATU) in Tehran, Iran. Check out his social media, he has a ton of videos.

Before laying down this beautiful shot, Khadem maps it out for the viewers. His goal is to hit the cue ball towards the triangle, making the triangle bounce backward and surround the orange ball. While that develops, the cue ball travels and hits the red ball into the corner pocket.

7. Ken Aylesworth Shows Off His Skills

Ken Aylesworth, also known as ‘Sarge,’ is a Vietnam War veteran that spent 20 years in the Air Force as Master Sergeant (hence the nickname). Of course, that wasn’t the only thing he found success in – he’s also one of the top-rated and greatest trick pool shot artists in the world.

This video was recorded on November 7, 2012 at Arizona State University. Aylesworth was doing a trick shot demonstration to a group of billiards enthusiasts. The goal is to hit the yellow ball in a way that hops up and knocks the blue ball off the bottle, but keep the 6 ball on it.

During the demonstration, Aylesworth tells the crowd that he likes to ask for five attempts, due to the difficulty of the shot – it needs to be perfect. Did he need five attempts? No, because he did it on his first try. Not only that, but he almost made the yellow ball in the corner pocket.

6. Through the Smoke Ring (Because Why Not?)

That’s not all, though. Not only does he make it through the smoke ring, but he sinks the cue ball into the corner pocket – almost like a swish. It was an incredible shot, but we also want to note that smoking is bad, even if it’s out of a vape. Shoot trick shots, but do it in a healthy way!

Snooker is one of the most popular cue sport disciplines in the world. It involves the use of 22 balls – a cue ball, 15 red balls, and six colored balls (blue, pink, yellow, black, green, and brown). Pocketing a red ball nets one point and colored balls are worth two to seven points.

Steve Davis OBE is one of the greatest snooker players of all-time. In the 1980s, he won six world titles, ranked No. 1 in the world for seven straight years, and was featured in eight World Snooker Championship finals in a span of nine years – only missing the final once in that span.

With this trick shot, Davis has 14 red and one black ball lined up in a specific pattern on one side of the table. He hits one of the red balls, which causes a domino effect as all the other balls start to travel. One of the red balls hits the black ball, which makes its way to the corner pocket.

Ziemowit Janaszek is a talented billiards player that’s known for his jaw-dropping trick pool shots. He likes to display his talent with the use of a GoPro, which gives the viewer some unique and interesting viewing angles – which is quite valuable with tough trick pool shots.

The first shot is a break style that sees all the colored balls find a home. The second one is just incredible – he somehow finds a way to get the yellow, orange, and red balls in their respective pockets without disturbing the long line of colored balls in the way. That shot was so nasty!

The third and fourth shots weren’t as hard as the second, but they were still difficult to complete. His fifth shot, though, was another incredible one from start to finish. His shot at 0:37 was also pretty nasty with that spin. And his final shot was yet another jaw-dropping pool trick shot.

Tim Chin, also known as Trick Shot Tim or ‘The Dragon,’ is an artistic pool player currently based in Las Vegas. He is dedicated to helping grow the sport with his incredible display of trick pool shots. He was once the 2010 Ultimate Trick Shot Tour Champion for his incredible talent.

This trick shot Chin is doing in this video is crazy difficult. He first hits three colored balls with the cue. One goes straight into the side pocket, another one bounces off the side wall and into the adjacent side pocket, and the third one travels to the corner pocket – but that’s not all he did.

He hit the cue ball in a way that allowed it to spin and backtrack in-between a row of balls and the triangle. The cue ball then travels to the other corner pocket and makes its way through a row of colored balls before striking the red ball into the pocket. Four balls, one shot – incredible!

2. Going Down the Line, One at a Time

Florian Kohler, also known as ‘Venom,’ is a phenomenal trick shot king that has played a major role in popularizing the sport. That’s not all you need to know about him, though. He’s also a judo black belt, has his Optometrist license, and is capable of speaking three languages.

1. The Most Elaborate Trick Shot Ever? Maybe…

Sometimes, you not only have to be creative and precise with your trick pool shots, but you have to be elaborate. And when I tell you we’ve found the most elaborate, planned, and executed trick shot of all-time, we’re not lying. It’s a one-in-a-million chance at success.

Success is exactly what this English pool club achieved. It took them the entire night to set it up – which started off by putting a cue ball down a flight of stairs. That creates a series of events as the shot travels across nine different billiards tables – each sequence better than the next.

By the end of the video, a cue ball travels down a make-shift putting green and eventually finds its way right in the putting hole – a hole in one, if I do say so myself. This trick shot is legendary because it combines the talent of two different sports – golf and billiards – which is amazing!

It’s this dynamic that makes billiards – and any sport, for that matter – so interesting, unique, exciting, and rewarding (both to play and to watch). You never know when you might witness something amazing and when it finally happens, there’s no better feeling in this entire world.

YOU MAY ALSO LIKE: 20 Hockey Players and Their Adorable Families