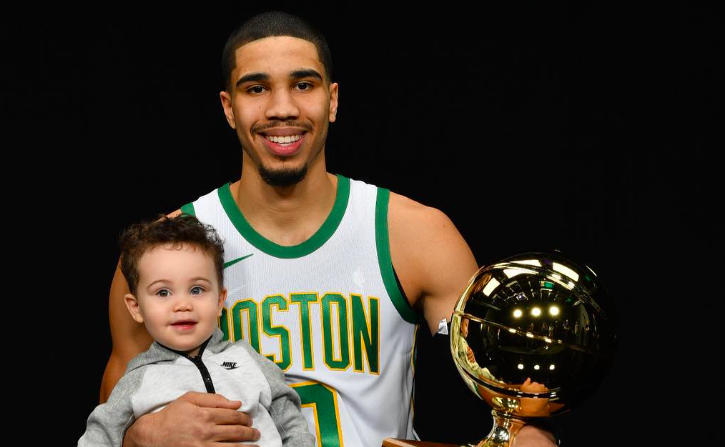 Jayson Tatum of the Boston Celtics recently lived out a lifelong dream of his: playing in the National Basketball Association’s championship game.

Incredibly, the 24-year-old father shared that the best part of his NBA experience is when he gets to spend time on the court with his son, Deuce.

In 2017, the professional basketball player made his NBA debut when he was only 19 years old. He was thrown into stardom as a third-round pick and while having to adjust to the hardships of professional athleticism, his son Jayson “Deuce” Tatum Jr. was born.

“That was, like, the biggest year of my life, right? Starting this new chapter in my career, I just had a child,” the Celtics star recalled during a press conference last week, according to a local media outlet. “There was no guideline or there was no, you know, the exact way to do it.”

Tatum continued describing the beginning of his fatherhood, noting that simultaneously learning the ropes of fatherhood and advancing his basketball career had its challenges. “It was all about what was natural,” he said, describing how he managed the two significant jobs.

RELATED: Serena Williams’ 4-Year-Old Daughter Had Her First Ballet Recital and the Picture Is Incredible

This conversation also sparked the athlete to discuss the importance of being a good role model in his son’s life.

When asked if he intends to be a good role model to other dads around the world, Tatum relayed, “I don’t know if it’s intentional as much as it’s just natural and what we do. I realize that I do have a platform and things like that. If I am a role model for young fathers around the world, that’s great.”

Continuing, he expressed the sentiments, “I think we need more role models like that. Just to have more male fathers be present and things like that, show that you can do both, regardless of whenever you work, whatever your profession is.”

Since the beginning of his professional basketball career, Tatum quickly proved himself to be an excellent athlete on the court. In the years following 2017,  a three-time NBA All-Star, a First Team All-NBA player, and even became the Eastern Conference Finals MVP in the last month. And, the person who has stuck by his side throughout the entire journey, is his 4-year-old son.

“It’s kind of like we’re growing up together. As he’s gotten older, I’m going through my career, sharing these moments, experiencing this together as we grow up. I think it’s the coolest part for me,” the MVP shared.