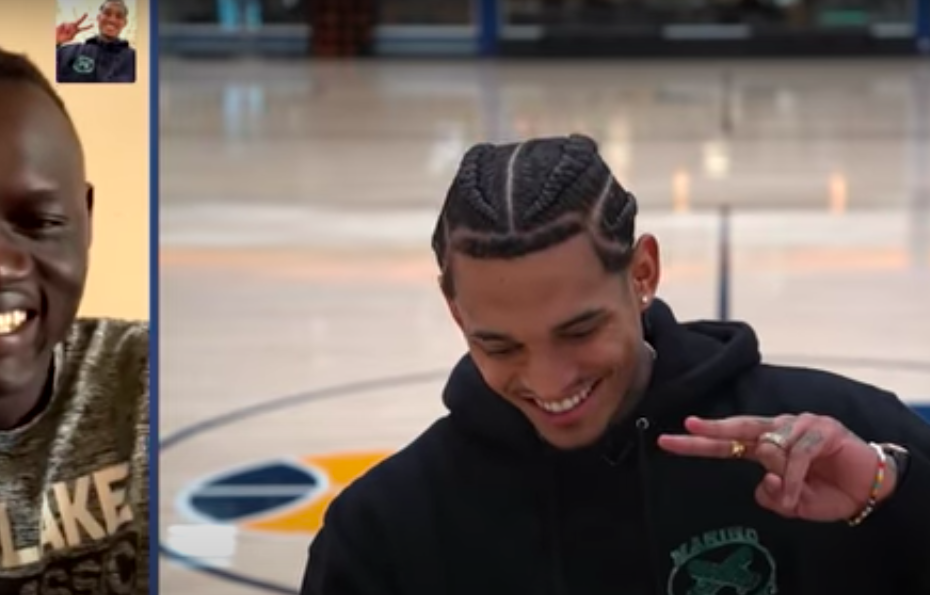 You Have To Watch This: Utah Jazz Players Surprise Students With College Scholarships

The Utah Jazz won a lot of games this season. A lot. First place in the Western Conference-type of winning. They also won with a special purpose, as well. Those 55 total wins from the regular season and preseason (52 regular season wins) equated not just to being a top the West in the NBA, but also to 55 college scholarships.

The Jazz win, everybody wins if you’re a high school senior selected to get the scholarship. Per the Jazz: “The scholarship awards will cover the full cost of attendance, including tuition, books, fees, and room and board.”

That’s a full-ride scholarship for so many students in Utah! Chalk that up as another win.

In a time of gratefulness, shock, excitement, and joy, students were surprised by Jazz players sharing that they were awarded the scholarship.

The video the Jazz uploaded also showed a student taking a screenshot selfie with Jordan Clarkson. That student is, according to NBC KSL TV’s Morgan Wolfe, Makuei Lueth, who “came (to Utah to)play for the Juan Diego High School basketball team, then also joined the cross country team. Between practice and school, the Sudan native worked at the Utah Jazz merchandise store and cleaned for his school…the teen had been preparing ways to cover his finances for college when he got a call from Jazz guard Jordan Clarkson three weeks ago.”

Those are all wins and those probably equate to one of the best days in these students’ lives, not needing to take out loans, not needing to get into debt, so they can focus more on academics, taking it all in, trying new experiences, and enjoying this next stage of their life. And you already know the parents or legal guardians are celebrating right along with them with a massive sigh of relief, joy, and comfort knowing their child is set financially for college.

Here’s what the Jazz’ scholarships are and how it equates to the team’s wins:

“For each win this season, the Jazz have pledged to fund a full four-year scholarship for a Utah high school student from an underrepresented group. The first 30 recipients — one for each preseason and regular season victory the team had before the All-Star break — will enroll as freshmen at one of six Utah universities in the fall of 2021…The Jazz have now won 55 preseason and regular-season games to this point, with the NBA playoffs set to begin this weekend. The remaining scholarships, for wins from the All-Star break through the postseason, will be awarded for students enrolling in college for the 2022-23 school year. Applications will open at www.utahjazz.com/scholarships at a later date.”

That’s right, there will be even more scholarships given out (the 25 wins since the All-Star break) plus any more wins the Jazz may get in the playoffs. Hey, if they win the whole thing, keep tacking on to helping more and more students get an education.

And by the looks of it, all the Jazz are doing now is winning. So, that’s easy money for even more hopeful high schoolers in need of a college scholarship.

The Jazz mentioned how much of a need a program like this is for students in the state:

“There is a gap between the number of students from ethnically diverse groups in Utah high schools and the number of those students who go on to post-secondary education, according to the Utah System of Higher Education. The Utah Jazz scholarship program seeks to help close that gap, making the state a more equitable place for all.”

Again, here’s how to be able to apply again in case you or a loved one is in Utah and could use a college scholarship: “The remaining scholarships, for wins from the All-Star break through the postseason, will be awarded for students enrolling in college for the 2022-23 school year. Applications will open at www.utahjazz.com/scholarships at a later date.”