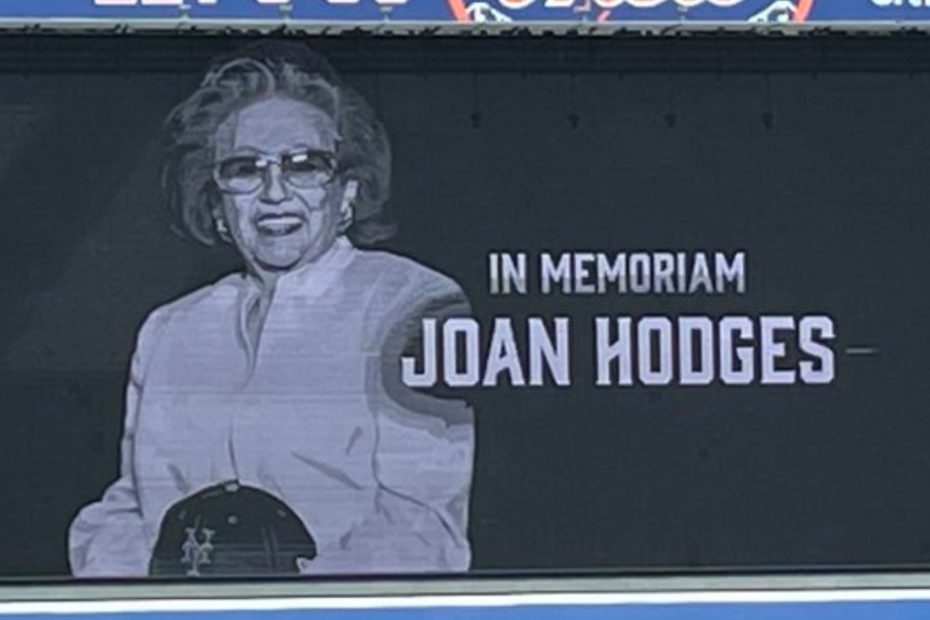 Joan Hodges, wife of legendary Hall of Famer and World Series-winning New York Mets manager Gil Hodges, passed away at the age of 95 after a long battle with an illness. She was only 10 days away from turning 96.

Following her passing, the New York Mets held a tribute to her, honoring her place in their history. During Sunday’s game against the Pittsburgh Pirates, the team held a moment of silence to showcase their grief.

Her husband Gil was inducted into the Hall of Fame in July, 50 years after he tragically passed away from a heart attack. He hit 370 home runs during his career with the Dodgers before he moved on to managing the New York Mets. In 1969, he led the franchise to their first ever World Series Championship title, forever branding him as a historical figure in Mets history.

However, after his passing, Joan quickly adopted his persona and become a new representative of success in regards to the franchise. “We are so thankful that Joan was able to see Gil inducted into the Hall of Fame in July,” Mets president Sandy Alderson said in a statement. “That meant so much to her and the entire Mets and Hodges family. She was a true baseball fan and still followed her two favorite teams, the Mets and Dodgers.”

Alderson added the sentiments, “We send our condolences to her daughters, Irene and Cindy, her son Gil Jr. and the rest of the Hodges family.”

In addition to the Met, the Hall of Fame also issued a statement of grievance following Joan’s passing. Taking to Twitter, the organization expressed, “The Hall of Fame’s thoughts are with the Hodges family following the passing of Joan Hodges, widow of Hall of Famer Gil Hodges. Her love and support of her husband and the teams he represented was felt throughout the game.”

Joan and Gil’s daughter Irene spoke on behalf of her father during his induction into the Hall of Fame in Cooperstown on July 24. During her speech, she made sure to mention Joan’s reaction to her late husband’s legacy.

“Today I am especially happy for my mother,” Irene shared in the midst of her speech. “When the call came from the Hall of Fame … I began sobbing probably as much as I did when I lost my father. I was so beyond happy for him and thrilled that my mom at 95 would be able to hear this news.”