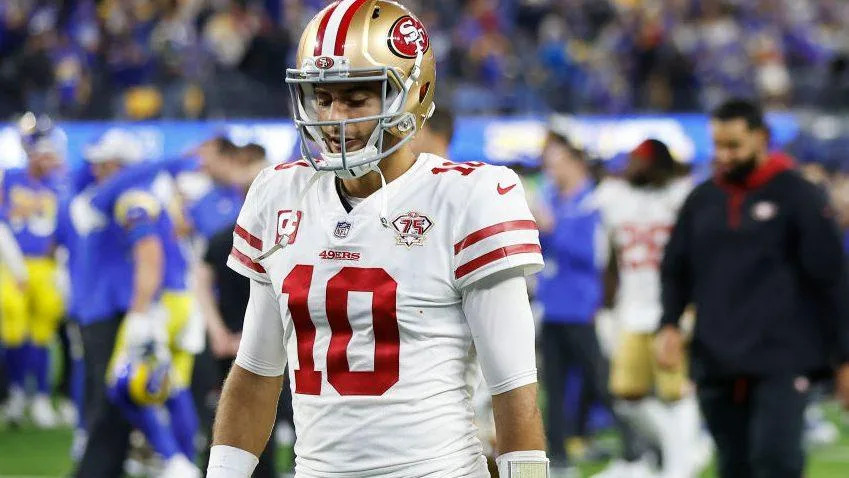 When the San Francisco 49ers drafted quarterback Trey Lance with the third overall draft pick, last offseason, Jimmy Garoppolo knew his time with the team would likely be cut short. According to reports on Tuesday afternoon, that might turn into a reality sooner than later.

Speaking to reporters in what turned out to be a 17-minute Zoom conference, Garoppolo was very open about his future and what happens next. This comes not even two days after general manager John Lynch and head coach Kyle Shanahan deflected questions about his future.

Garoppolo confirmed that he does expect to be traded ahead of the 2022-23 season. He also plans on having a say in where he goes – something that other quarterbacks, such as Deshaun Watson, haven’t been given – and hopes to play for a team in a position to win next season.

In the Zoom meeting, Garoppolo stated, “I was talking to John yesterday about finding the right destination and whatever the future holds, just doing it the right way.” He noted that he still has a long career ahead of him and a lot of quality football left in him, so he’s excited about the future.

He also added, “I just want to go to a place where they want to win. That’s really what I’m in this game for. I’m here to play football, win football games and as long as I’ve got that and good people around me, I think the rest will take care of itself.” It’s clear that winning is his top priority.

Should the 49ers Move On From Jimmy Garoppolo?

Jimmy Garoppolo’s statements didn’t carry the same energy that Lynch and Shanahan had following their loss in Sunday’s NFC Championship game. The two made it clear that they haven’t thought about his future and that he very well could end up staying with the team.

The GM and head coach duo like where the team is at right now. They have a quality veteran with experience and a promising young quarterback that just finished his rookie year. With other teams having a hard time finding one good quarterback, the 49ers are in a good place with two.

According to Shanahan, “we’re in a situation where we’ve got to make some tough decisions that won’t be easy. But I’m happy about that. That means you’ve got the best scenario going and that’s why we’ve got to put a lot of thought into this. And Jimmy will know everything as we go.”

If the 49ers feel confident that they can win with Trey Lance moving forward, then there’s really no reason to keep Jimmy-G on the roster – especially since they can save north of $25 million in cap space by trading him by March 16th. It’s a no-brainer from a financial standpoint.

With the number of expiring contracts they have to key players, San Francisco can use that cap space to re-sign talent and spend in free agency to build an even more dominant team around Lance next season. The 49ers would be in a tough position without that extra $25 million.

As for Jimmy Garoppolo, the good news is there are a number of good teams out there looking for a franchise quarterback – including the Denver Broncos, Pittsburgh Steelers, Seattle Seahawks, Washington Football Team, Carolina Panthers, Miami Dolphins, and more.

YOU MAY ALSO LIKE: New York Giants Hire Brian Daboll as Head Coach

Either way, it seems Garoppolo has played his final game with the 49ers. Over the past five years with the team, he had a 31-14 record and threw for 11,162 yards, 66 touchdowns, and 38 interceptions. He’ll find a new home soon and it’ll be a win-win for both him and San Francisco.