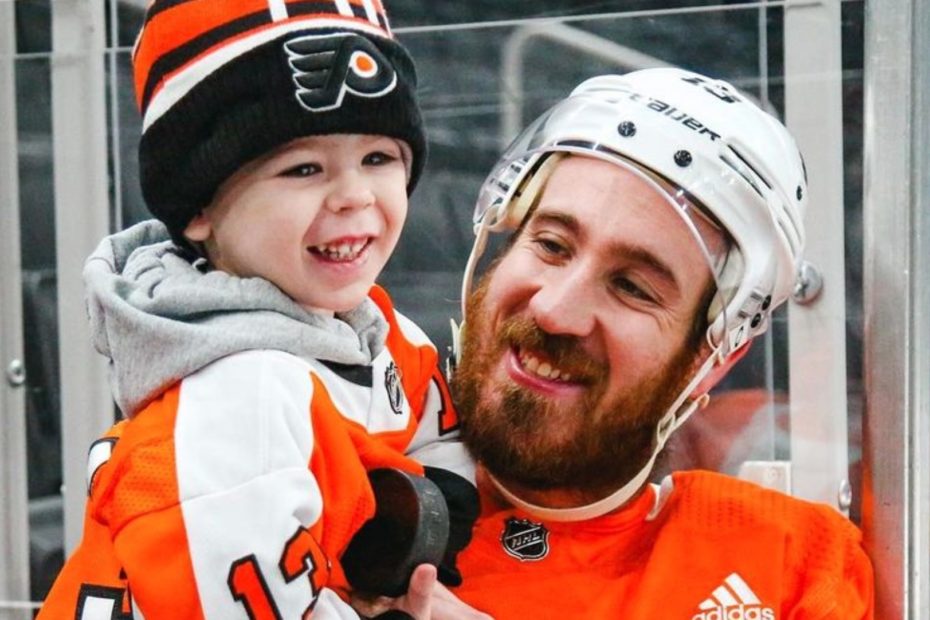 Jimmy Hayes’ love of hockey has rubbed off on his oldest boy. As Hayes’ wife, Kristen, shared with her Instagram followers, Beau is just like his daddy.

As Mamas Uncut previously reported, Jimmy Hayes unexpectedly passed away on August 23, 2021. The shock of his death hit his family, friends, and fans hard.

Over the last five months, Kristen has kept her husband’s memory alive, while also being open about her grief, and how she has been keeping life as normal as possible for her sons, Beau and Mac.

Jimmy was so beloved by so many, but it is his son Beau who is keeping his dad’s love of hockey alive. On January 13, the Philadelphia Flyers shared photos of Beau Hayes and his “Uncle Kev,” as in Flyers centerman Kevin Hayes.

“Might be my favorite Flyers photos ever, Uncle Kev and Beau Hayes rocking the 13 sweater,” one commenter wrote. “So much love in one picture ❤️❤️❤️ Family is the most important thing in life,” another added.

Kevin is Jimmy Hayes’ little brother. In an interview with ESPN, Kevin praised Jimmy’s former team, the Boston Bruins, for being there for Jimmy’s family during this difficult time.

“The Bruins have been amazing with my family and my brother’s family,” Hayes told ESPN’s The Point, “especially Brad Marchand. He has played street hockey with [Jimmy’s son] Beau. He went down to the local Dorchester rink and hung out with them, got them sticks, got them pucks. Beau wants to be Kevin Hayes and Brad Marchand every single morning when he wakes up.”

Although the Flyers fell to the Bruins 3 to 2, Hayes admitted that hockey helped him through the loss of his brother. “Hockey is the greatest job, the greatest sport of all time. I truly believe that.”

“To go through everything that happened and the support I got from [GM] Chuck [Fletcher], AV [former Flyers coach Alain Vigneault], [interim coach] Mike Yeo, everyone in the organization, all of my teammates, it was incredible. Even the support from other teams has been crazy. If you can’t come to the rink and be positive and have a smile on your face and try to help someone else’s day … it’s hard not to want to do that. That’s basically my main goal every time I come here.”