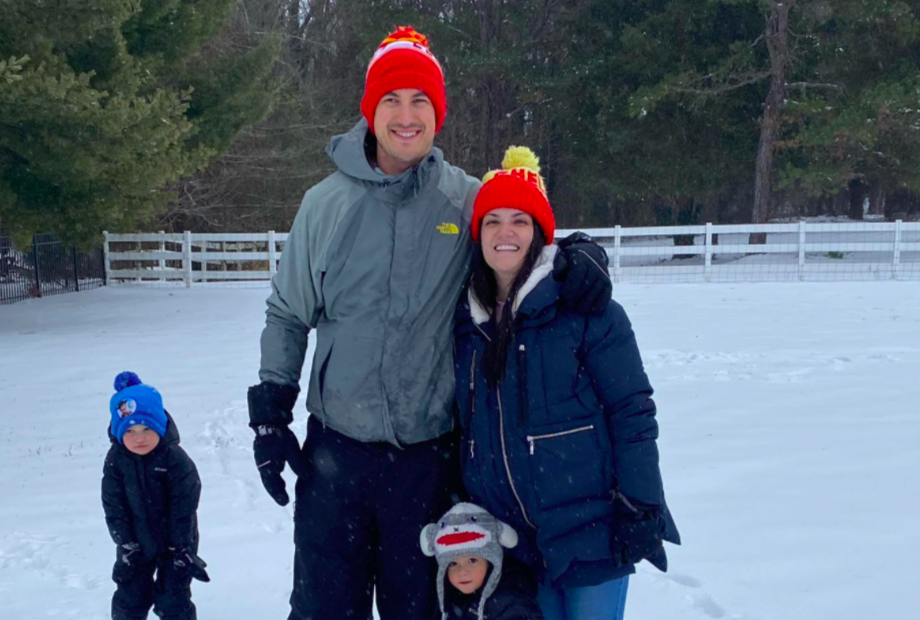 NASCAR driver Joey Logano and his wife Brittany have been married since 2014 and over the course of their union, they have welcomed three children into their family. Through smiles and joy, the two did admit that having three children all under the age of 5 does create some chaos throughout their home.

The couple share two toddler sons and recently welcomed their daughter Emilia Love into the world just last month. In an exclusive interview with the media outlet PEOPLE, Logano and his wife gave the details of how they go about raising their three children.

“Monday nights are his,” 30-year-old Brittany explained after noting that the driver typically spends his weekend on the race track. “[Joey] took the baby all night last night for me. He lets me sleep.”

Although a newborn baby is definitely a handful, the couple relayed that their daughter thus far has been the most painless child to care for.

“​​So far, Emilia has been the easiest baby,” the mother said. “I don’t know if that’s because she’s our third one and we are a lot calmer, but yeah, she’s just a really good baby. She sleeps and most of the time, she’s quiet. I mean, her little cries are still cute.”

Logano also pointed out that his paternal instincts are different compared to when he was just fathering boys. He shared that he feels more protective and even made a joke about hating his daughter’s future boyfriend.

“I don’t care what anyone says, it’s very different,” Logano commented. “At least for a dad, you fall in love immediately when you see her, and your protective instincts are heightened compared to what you feel with the boys. I mean, Emilia is only a month old, but I could tell it’s going to be very different already…I already hate her boyfriend.”

RELATED: Carson Wentz Closes Door With Colts After Only 1 Year: ‘We Have Loved Being Part of This Community

The couple went on to illustrate the picture of raising three young children. Unsurprisingly, they detailed madness and mayhem.

“​​It’s chaotic,” Logano expressed. “There’s a lot going on all the time. I come home after a busy weekend, and a lot of times, there are kids just screaming everywhere.”

The driver also shared that his youngest son Jameson has a feisty personality and often expels a lot of energy. He stated that the 2-year-old is, “just on the gas all the time. If you take your eyes off him for a second, he’s the one that is in the toilet or crying on top of the table. You just got to keep an eye on him.”

The couple shared that transitioning their boys into life with a sister has been relatively smooth, besides occasional bursts of jealousy from their youngest son.

Lucky for Jameson, it seems as if his parents feel confident with the number of kids in their family.

“​​I think we’re done,” said Brittany. “I think it’d be different too if [Joey] wasn’t traveling so much…Yeah, I think we’re good.”