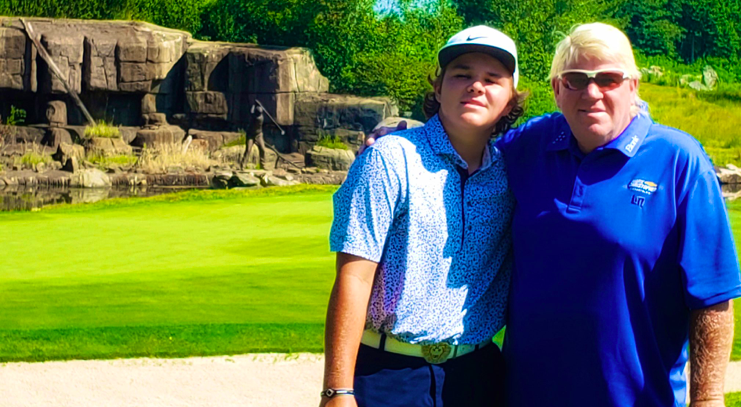 PGA Tour golfer John Daly will be competing in the 2020 PNC Championship starting on December 17 with his teammate that just so happens to be his son, LJ “Little John” Daly.

RELATED: Tiger Woods And Son, Charlie, To Compete In Golf Tournament Together

“It’s Official!!!! Proud of my son and so happy he became a #Razorback…!” Daly posted on Twitter.

John and Little John, now both Razorbacks, will be competing in a stacked tourney with pro golfers and a family member as their teammates.

And it seems Daly really doesn’t want to miss this tourney to have special bonding moments with his son.

According to The Golf Channel, Daly was diagnosed with bladder cancer in September. And according to a TMZ report on November 22, Daly “is recovering after undergoing a surgical procedure related to his cancer”.

According to TMZ, doctors told Daly “they wanted him to undergo a procedure connected to his treatment — and the timing could have clashed with the golf tourney. So, John…bumped up the procedure…so he could have enough time to recover and get himself ready to play in December.”

Talk about being determined to play with his son in the tournament!

Daly said in September he appreciates all the support.

“Hey All, thank you all so much for all the love, texts, msgs & support thru this!” Daly said in a Twitter post. “It’s all still shocking for me but know I’ll do what I have in me to beat this! My whole life I’ve beaten the odds, so it’s NOT time to stop now! Ready for 2020 to be…over!”

The tourney was founded in 1995 and brings pro golfers together with a family member to compete as a team for the prize.

This year, the two-day tourney includes a field of 20 major champions and their relatives. The prize? A whopping $1,085,000.

Here’s Who Will Be Playing Against John & Little John:

What a wonderful tourney, bringing families together during the Christmas season.

Also, shout out to Daly for supporting LPGA golfer Haley Moore, saying on Twitter: “YOU BE YOU ALWAYS”.

The LPGA said in the Tweet that Daly retweeted: “Don’t let those people judge you. If you have a dream, dream it. If you want to get there, you always have to believe in it.”