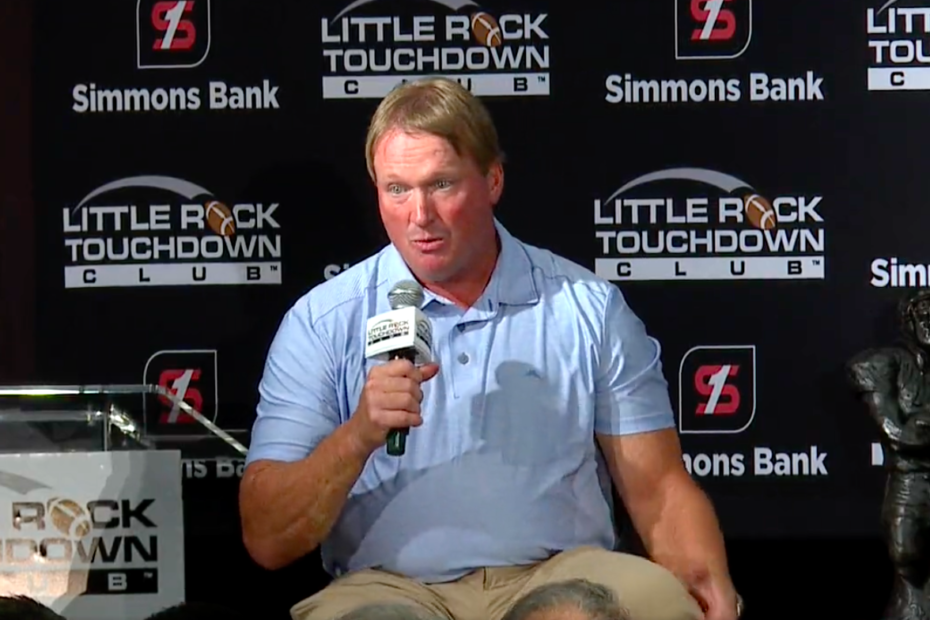 Last October, notable NFL coach Jon Gruden was the subject of controversy when emails leaked of him using homophobic and misogynistic phrases. Now, nearly one year after the incident, he is breaking his silence.

At the beginning of the 2021 NFL season, the Wall Street Journal published an essay that leaked various emails from the Las Vegas Raiders head coach using racist, anti-gay and misogynistic language. Within the contents of the emails, he expressed discomfort with women referees, the drafting of a gay player, and disagreement with various players kneeling during the National Anthem.

Additionally, emails were sent from Gruden to  Bruce Allen, the former president of the Washington Commanders, calling NFL commissioner Roger Goodell various homophobic slurs. He proceeded to accuse Goodell of pressuring Jeff Fisher, then the coach of the Rams, to draft “queers,” which is a reference to the team’s 2014 selection of  Michael Sam, an openly gay player.

Following these emails being brought to the public’s attention, the coach made the executive decision to leave the league and step down from his position as head coach.

“I have resigned as Head Coach of the Las Vegas Raiders,” Gruden said at the time in a statement issued by the team. “I love the Raiders and do not want to be a distraction. Thank you to all the players, coaches, staff, and fans of Raider Nation. I’m sorry, I never meant to hurt anyone.”

Jon Gruden claims he is a good person, despite his controversial language

Gruden, who has since filed a lawsuit against the NFL for allegedly singling him out, discussed on Tuesday at the Little Rock Touchdown Club in Arkansas that he was going to open an honest level of dialogue about the controversy.

“I’m ashamed about what has come about in these emails, and I’ll make no excuses for it,” he admitted. “It’s shameful. But I am a good person. I believe that. I go to church. I’ve been married for 31 years. I’ve got three great boys. I still love football. I’ve made some mistakes. But I don’t think anybody in here hasn’t. And I just ask for forgiveness, and hopefully, I get another shot.”

In addition to his apology, Gruden discussed distrusting the media due to his own experience with how he has been perceived. Despite working for ESPN, he shared that he is hesitant to watch the channel anymore out of fear of the reports not being accurate.

“I get choked up because there’s a lot of misunderstanding out there right now,” he explained. “I don’t even want to watch the channel [ESPN] anymore because I don’t believe everything is true. And I know a lot of it is just trying to get people to watch.”