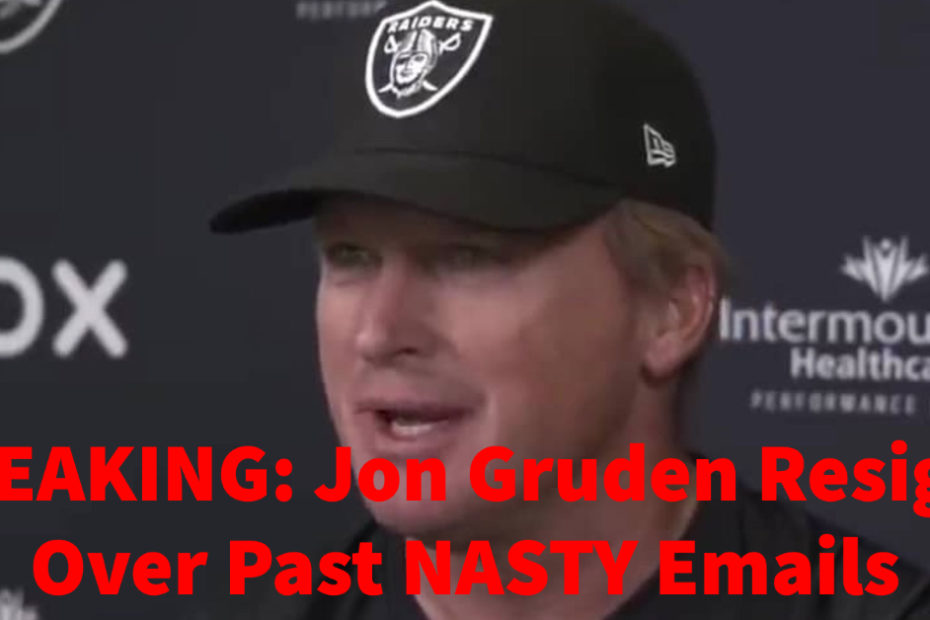 Jon Gruden’s career in the NFL has had its fair share of twists and turns. Gruden has been a coach for several professional and collegiate teams before he became a head coach for the Oakland Raiders from 1998 to 2001.

In 2001, Gruden became the head coach for the Tampa Bay Buccaneers. He remained in that position until 2009 when he was fired.

After being let go, Jon Gruden tried his hand at color commentating and had significant success in his new line of work. However, in 2018, Gruden was rehired as the Raiders head coach where he has remained until recently.

On Monday, October 11, Gruden resigned as head coach of the Las Vegas Raiders after The New York Times published emails he had sent in the past. Those emails included homophobic and misogynistic remarks.

These emails closely followed another statement made by Gruden in which he made racist remarks involving a union leader. In his resignation statement shared on the Raiders’ official Twitter account, Gruden made a cursory apology.

“I have resigned as Head Coach of the Las Vegas Raiders. I love the Raiders and do not want to be a distraction. Thank you to all the players, coaches, staff, and fans of Raider Nation. I’m sorry, I never meant to hurt anyone.”

In his own statement, the owner of the Raiders, Mark Davis, said he accepted Jon Gruden’s resignation and that their special teams’ coordinator, Rich Bisaccia was evaluated to become the interim head coach. In his emails, Gruden was recorded calling NFL commissioner a “f*ggot” and a “clueless anti-football p*ssy.”

He also wrote that Goodell pressured Jeff Fisher, the then-head coach of the Rams to draft “queers.” This was seemingly in reference to retired football player Michael Sam, who has the time was one of the only openly gay football players.

Interestingly enough, one of the biggest stories of the summer this year was Raiders defensive lineman Carl Nassib announcing that he is gay in June 2021. Further, additional emails captured Gruden making a stink about the NFL’s initiative to combat the rising numbers of concussions and calling for Eric Reid to be fired after he kneeled during the national anthem.

Gruden also made racist remarks about DeMaurice Smith’s lips. Smith is black and the executive director for the NFLPA. Many of these emails are dated between 2011 and 2018 when Gruden worked for ESPN.

In reference to the email that talked about Smith, Jon Gruden said on Friday that he didn’t remember sending the email and that his language “went too far,” adding, “I never had a blade of racism in me.”