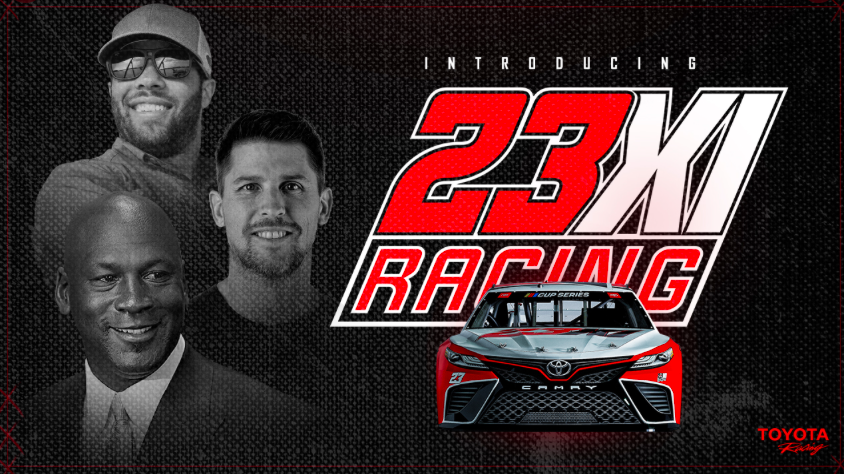 With the announcement that Denny Hamlin and Bubba Wallace were to join a new Jordan racing team, 23XI Racing, the much-anticipated number-23 car was unveiled.

Of course, the 23 is a nod to Michael Jordan.

It’s a new era for NASCAR with this collaboration of Hamlin, Wallace, and Jordan coming together to take flight with Air Jordan.

“A new chapter in Motorsports,” Hamlin said in a Tweet. “The norm doesn’t fit for us. This is only the beginning.”

Wallace is also excited for this opportunity.

“I’m still processing it everyday,” Hamlin said to CBS This Morning. “This is an exciting opportunity that’s been put in front of me that I have to capitalize on, being a part of a team with Michael Jordan and Denny Hamlin. Twenty-three-eleven partnership with Toyota, it’s coming together quite nice. Next year can’t get here soon enough. So, just excited for the opportunity. That’s the biggest thing. Just gotta make sure I do my part, deliver each and every time out next year.”

In what’s been a trying year for so many, including NASCAR and Wallace, we’ve seen a lot of good still come out of it. In regards to Wallace, Comcast announced he is this year’s Comcast Community Champion of the Year.

“Thank you for the work you and your Live To Be Different Foundation do to fight for inclusion, empower the next generation, and help others fulfill their potential,” Comcast said in a Tweet.

The award was given because of Wallace’s work with the Live to be Different Foundation, aiming to “lift up individuals seeking a means to fulfill their potential, no matter their race, gender, disabilities or socio-economic situation. The foundation will receive a $60,000 donation toward his foundation in recognition of his outstanding contributions to the community in 2020″ according to Comcast.

“From taking a stand for social justice, to fostering an inclusive environment through the Live To Be Different Foundation, Comcast is honored to recognize Bubba Wallace as the 2020 Comcast Community Champion of the Year,” Matt Lederer, vice president of brand partnerships at Comcast said. “Bubba embodies everything this award stands for and we look forward to standing together as he continues to make a positive impact in our communities and across the sport.”

Wallace also talked to People in their exclusive feature about how NASCAR is more exclusive.

“I feel that overall we’ve made the sport more inclusive for people that may not otherwise have felt completely welcomed,” Wallace told People. “Hats off to NASCAR, and everything they’ve done to help create change and welcome the new fan base…We want all people, current, future, and past generations, to know that you’re always welcome at a race.”

The new car is planned to be debuted at the popular Daytona 500 race in February 2021.