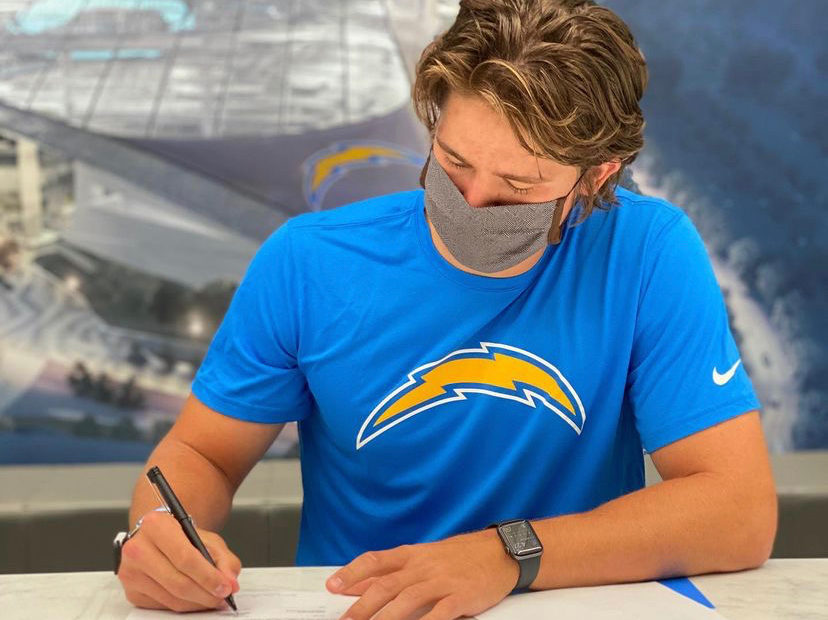 Twenty-three-year-old Justin Herbert, Los Angeles Chargers rookie quarterback, has anticipated his career with the NFL for a long time now. In fact, at the young age of 9, the quarterback wrote in a project for his fourth-grade class that he would be a professional football player when he is all grown up.

After Herbert led his team to victory over the Las Vegas Raiders during Monday night’s game, the NFL took to Instagram to share the adolescent dreams of their quarterback. In 2009, the young NFL wrote, “When I grow up I am going to be a professional football player.”

In addition to this proclamation, the 9-year-old Eugene, Oregon native also noted that his favorite football team was the Chargers and that he would grow up to live in Los Angeles. Now that he is doing that and playing for his favorite team, it’s safe to say dreams do in fact come true.

RELATED: 28-Year-Old Carl Nassib, Raiders Defensive End, Opens Up About His Special Man and Life After Coming Out

If fourth grade Justin could look at where he is today, as a 23-year-old quarterback, he surely would be proud. Last Monday marked the 19th game in which Herbert started and he amassed three touchdowns, helping bring his team to a victory over the Raiders.

“Justin Herbert completed his 500th pass on #MondayNightFootball, in only his 19th NFL start,” the NFL noted on Twitter. The league also included the fact, “Herbert is the first QB in the Super Bowl era to reach 500+ completions before his 20th NFL start.”

In addition, this information does not come as a surprise to those who Herbert works around. In fact, they expect nothing less of him considering his hard work and dedication to the game of football.

Chargers head coach Brandon Staley spoke on behalf of the 23-year-old, “Full trust — that’s what he earns on a day-to-day basis. With how hard he works, how he prepares and how he performs in those got-to-have-it situations. He’s got that cool, calm, composure that affects everyone in a positive way. Including me. He executed very well tonight.”

Furthermore, The Washington Post offered Herbert’s sentiments on his amazing game and discussed what he and his team had to do to earn the victory. “We told everyone, ‘We’ve got to believe in each other. This is a drive that we’ve got to go down there and score.’ And thankfully we did. We executed well and I thought we played well,” he explained.