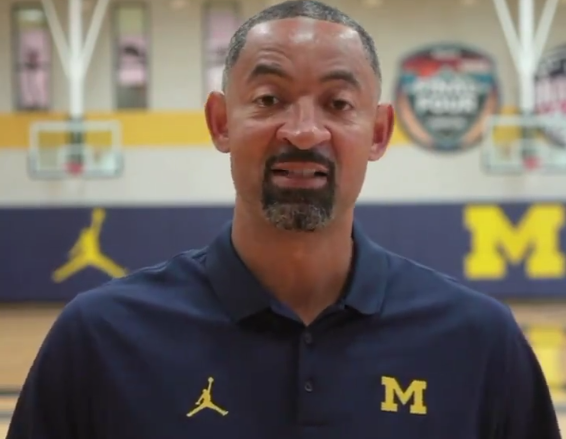 The Big Ten Conference is suspending University of Michigan men’s basketball head coach Juwan Howard five games and fining him $40,000 for his role in a scuffle on Sunday. With five games left in the Wolverine’s regular season, Howard won’t return until the Big Ten Tournament.

“Today’s disciplinary actions underscore the seriousness with which we take the incident that unfolded on Sunday. Simply put, there is no room at U-M for the behavior we saw,” Michigan athletics director Warde Manuel. “We will learn from this incident as a department, work to improve ourselves while operating under a spotlight, and move forward in a positive light.”

RELATED: 20 of the Longest Winning Streak in Sports History

The suspensions and fines come not even 24 hours after a scuffle broke out at the end of the Michigan-Wisconsin game on Sunday afternoon. Howard took exception to a late timeout called by Gard, who had a double-digit lead at the time, and confronted him about after the final whistle.

The two met at the end of the handshake line and things immediately heated up as they started to shove, yell, and point fingers. By the end of the scuffle, Howard had taken a swing at one of Wisconsin’s assistant coaches, Joe Krabbenhoft. That’s why he had the worst punishment.

“I thought it was not necessary at that moment, especially with it being a large lead. … I thought that wasn’t fair to our guys. And so that’s what happened,” said Howard at the end of the game. As for Williams, Diabate, and Neath, they were all seen throwing punches during the scuffle.

“Our expectation is that the incident yesterday will provide our coaches and student-athletes with the opportunity to reflect, learn and move forward in a manner that demonstrates decorum and leadership on and off of the court,” said Big Ten Conference commissioner Kevin Warren.

What’s Next for Juwan Howard & the Michigan Wolverines

What we all witnessed on Sunday afternoon was something we don’t see often in college basketball – especially from a head coach. There’s no place for it and it’s not the example you want to set for the young players you’re supposed to lead, represent, and develop into men.

The suspension and fine were both appropriate for Juwan Howard, who will sit for the remainder of the regular season. The suspension could’ve easily been worse considering his lack of apology after the game, which was the perfect opportunity to begin righting his wrongs.

After their 63-77 defeat to Wisconsin, the Michigan Wolverines are 14-11 on the season. They still have a shot at making the NCAA tournament, but they have little room for error with just five games remaining. Luckily for them, their next four games are at home before their season finale.

If the Wolverines move forward like they did a year ago when Howard was ejected from the Big Ten tournament, then Phil Martelli will be leading the team the rest of the regular season. Martelli had a 444-328 record as head coach of the Saint Joseph Hawks between 1995 and 2019.

For now, you’ll be happy to know that Juwan Howard has apologized for the incident, albeit a little late. “After taking time to reflect on all that happened, I realize how unacceptable both my actions and words were, and how they affected so many. I am truly sorry,” Howard said.

YOU MAY ALSO LIKE: 20 of the Greatest College Basketball Teams of All-Time

“”I am offering my sincerest apology to my players and their families, my staff, my family and the Michigan fans around the world. I would like to personally apologize to Wisconsin’s Assistant Coach Joe Krabbenhoft and his family, too,” he continued. “I will learn from my mistake and this mistake will never happen again. No excuses!”