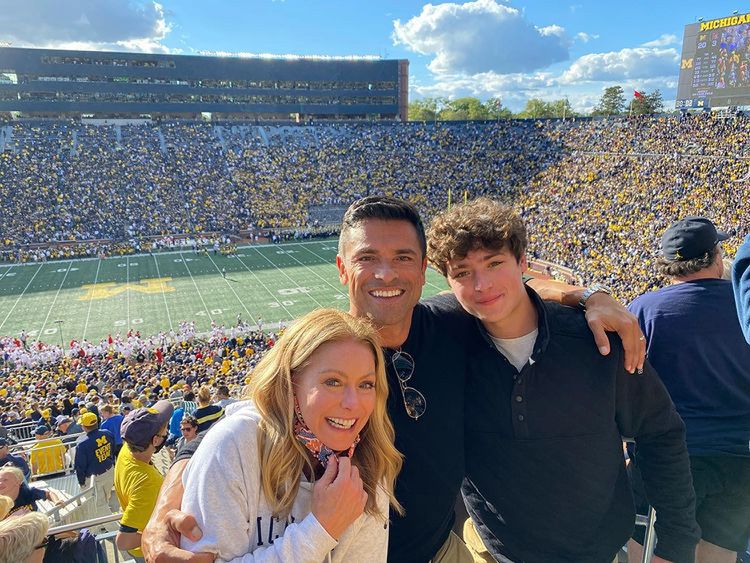 Celebrity couple Kelly Ripa and Mark Consuelos have shown nothing but support for their teenage son Joaquin and his pursuit of wrestling at the University of Michigan.

Last month, Ripa and Consuelos showed up at the University of Michigan campus to watch celebrate the team’s Big Ten win, a milestone Joaquin helped aide his team in. “Big day at the Big House! Go BLUE,” the mother wrote in the caption of a social media post.

The Big Ten win initially happened in March, but the team wasn’t gifted their celebratory rings until this fall during a football game. Alongside Joaquin, the entire University of Michigan wrestling team was honored for bringing home the substantial win.

“Good food and company at our annual football tailgate. Handed out some B1G rings,” the college’s wrestling team said in a statement issued on social media, which included a picture of Ripa and her son holding up his impressive ring.

Despite the mother’s outward support for his son’s accomplishments, the actress admitted during a February episode of Live with Kelly and Ryan that she knows absolutely nothing about the sport. “I don’t know what they’re doing; I have no idea what they’re doing,” she confessed.

“We’re such good wrestling parents that we just say whatever the parents sitting by us are saying,” Ripa continued. Consuelos even nodded along in agreement during this particular episode, convincing his wife’s co-host that, “We don’t know anything! … Stalling! Like, what does that mean?”

However, Joaquin’s wrestling accomplishments were not the only thing the family was happy to celebrate. According to the mother, her 19-year-old son recently got his driver’s license after years og insisting he was happy using a bicycle instead.

“It was a big day in our house,” Ripa said during a recent episode of her podcast. “He had his bicycle which he rode everywhere. And he’s like, ‘No, I’m fine with a bicycle.’ And then Michigan winter rolled in.”

Ripa proceeded to explain, “Then he’s like, ‘I think I am going to need to get a driver’s license because it’s freezing here.’ … It was one of those things where I was like, ‘How can the newborn baby have a driver’s license?”

Although the 51-year-old was confused as to why her son wouldn’t immediately jump at the opportunity to get his license, Joaquin’s father was more supportive of his decision to wait. She relayed, “Mark [Consuelos] was like, ‘Calm down, he’s 19.'”