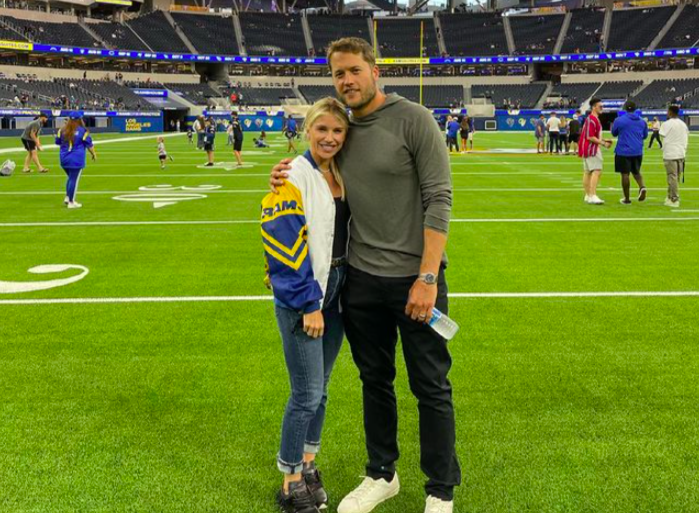 Kelly Stafford, the wife of the Los Angeles Rams’ champion quarterback Matthew Stafford, recently opened up about what their relationship first looked like when they met in college.

“Obviously, college relationships are tough, and when I first met Matthew he wanted no relationship at all. He wanted to have fun, and I was not that type of person,” she explained during an interview with WFAN Sports Radio 101.9 FM/660 AM New York’s Carton & Roberts.

She described the situation that she and Matthew were in at the time as a “back and forth” relationship with “love-hate” emotions. This is why she admitted that she dated his backup University of Georgia quarterback as a ploy to make him jealous. “I dated the backup to piss him off,” she admitted with a laugh.

Although Kelly shared that dating Matthew’s backup quarterback was done on purpose, she went on to explain, “It wasn’t a plot to begin with, but when I realized how it was working out, I didn’t stop the relationship, just because I knew I had a little effect on Matthew. The guy wasn’t all rainbows and a sweetheart back then.”

The Los Angeles Rams quarterback and Kelly have now been married since 2015 and share four daughters with each other. However, like many marriages, they come with their ups and downs. During a segment of the interview, Stafford also discussed how her postpartum insecurities impacted her relationship with the athlete.

She described feeling like she needed to regain control over her body via losing the pregnancy weight, which required a lot of focus and energy. In doing this, Stafford expressed not always feeling like she was giving her all in their marriage.

“I was in a terrible place, and not only did I not have energy for Matthew, but I was so insecure about my body that I would not be naked near him… I could not do it,” she stated.

“It was really hard on our marriage because of my feelings toward my own body. Saying it out loud, it seems selfish, but that’s where I was,” Kelly continued. “I was so insecure, I didn’t understand why my body wasn’t doing what I was seeing all these other bodies do, and I was also exhausted because I’m trying to figure out how to take care of twins. I was in such a bad headspace, and I didn’t know how to get out.”