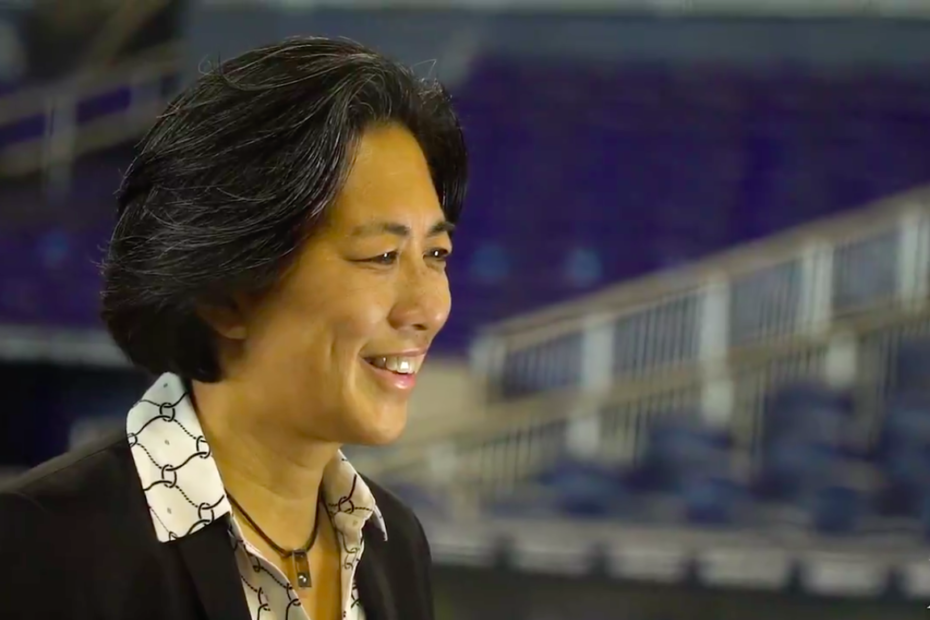 Kim Ng has made history as she becomes the first female general manager of a MLB team. And it also makes her the first woman GM of any of the four major American sports, which include the MLB, NFL, NBA, NHL, according to the MLB and USA Today.

Ng is now the Miami Marlins general manager. A huge congratulations is in order for this monumental and historic hire!

“…It made me realize that it really was a glimmer of hope and inspiration for so many. That if you work hard and you persevere and you’re driven and you just keep going, that eventually your dream will come true.”

RELATED: What You Should Know About the Upcoming MLB Playoffs

“It’s an exciting, special day for us…when I first reached out to Kim, I think for our first couple conversations, it became evident to both of us that this was a perfect fit,” Derek Jeter, Marlins CEO, said. “We couldn’t be more excited to have her experience, her leadership, help lead us down our path to sustained success. So, Kim, welcome to the Marlins family. I know your husband, Tony, is here, as well, welcome.”

Ng’s qualifications and experiences are extensive, as noted by the MLB. It ranges from being the Chicago White Sox assistant director of baseball operations to being the New York Yankees assistant general manager in 1998, becoming the youngest person in that assistant GM role at that time.

“It’s a special day for the Miami Marlins and this organization as we welcome Kim Ng as our new general manager,” Bruce Sherman, Marlins’ chairman and principal owner, said. “Kim, couldn’t be happier to have you in Miami…We are truly a fortunate organization to have someone with Kim’s 30 years of experience, three major league teams, and the past nine years at Major League Baseball. I can’t think of anyone more qualified for the position than Kim.”

In the introductory press conference, Ng thanked Sherman, Jeter, and the entire Marlins ownership group for the opportunity and said this means the world to her. Ng also thanked her past supervisors, including Torre, saying each of them has had a hand in making her the executive she is today.

“I’d also like to acknowledge my mother, who was absolutely relentless in her pursuit of me becoming successful in whatever…it was I was doing. I’d also like to acknowledge my father, while he’s not with us, he definitely fostered my love of sports and my family who’s just been so encouraging every step of the way to me…I’d love to thank my husband in front of all of you, who’s been my rock and who is every bit a piece of the word partner, he truly embodies that word.”

Ng said she’s received well over 1,000 emails and texts since the Marlins announced the hiring of Ng on Friday. She’s called the last 72 hours “extraordinary” for her.

After receiving all the congratulatory messages, Ng said it made her take a step back and realize “just how many people I’ve had a meaningful intersection with over my career.” They ranged from all walks of life, from writers to former players to current managers to scouts to coaches to front office executives.

“And then as the day unfolded, I was able to zoom out a little bit and realize just what was going on and just how much impact this was having over social media,” Ng said.

Here’s Just a Small Sample of the Overwhelming Amount of Support on Social Media:

“It really became about me being able to share the moment with so many,” Ng said during the introductory press conference. “I was watching text threads between friends, family members, and they were posting social media posts in these threads and I was getting to see really what the chatter was out there. And it made me realize that it really was a glimmer of hope and inspiration for so many. That if you work hard and you persevere and you’re driven and you just keep going, that eventually your dream will come true.”

While Ng makes history being the first woman to be a MLB GM, she’s also the first Asian-American MLB GM. ESPN’s Pablo S. Torre shared a story from Ng’s time with the Dodgers on Twitter.

She had been interviewed for and denied the opportunity to be GM at least five times, according to ESPN.

“It was patience, perseverance…you get a little bit dejected and it’s hard…there’s no other choice but to keep going on and to keep pushing through,” Ng told the Today Show after reportedly getting rejected from multiple GM opportunities over the years.

Ng shared that she got calls and text messages from guys who were just so excited to tell their daughters and wives of the news. Ng said she got voicemails from friends and front office executives “with tears, just so happy that I had broken through but really, I think, more for the sport. And more about what it meant for us in society.”

Ng said the next part was reflecting on what it took to get here, the perseverance, persistence, and “fearlessness”.

Ng also talked about her research of the Marlins organization. It struck her that there were so many different types of people who work with the Marlins, including multiple women in leadership positions.

“We look forward to having all our fans back next year, live, and to continue the great responses we had during this past year and continued success that’s sustainable for many years to come and Kim will be a critical part of that process,” Sherman said.