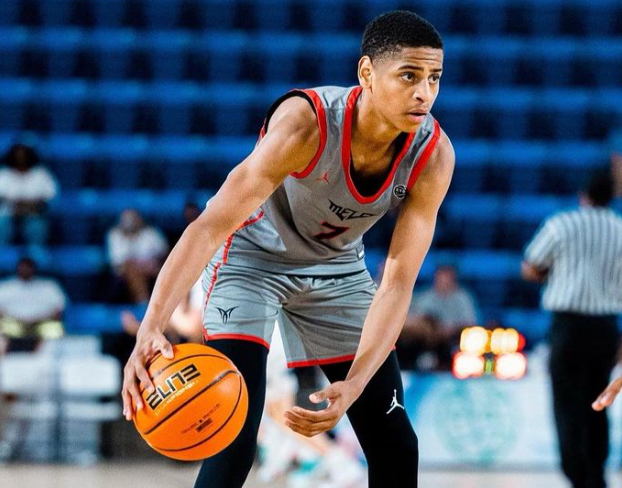 There’s nothing more exciting than watching kids of athletes grow up and forge their own path to success – especially when they follow in their parent’s footsteps and start a career in sports. It’s something fans get to witness often in the world of sports and something they’ll continue to witness for the rest of time.

Just look at Carmelo Anthony’s son, Kiyan, who recently received a scholarship to play basketball at Syracuse University – the same school his father played for during the 2002-03 season. At just 15 years old, it won’t be the only scholarship Kiyan receives and there’s no guarantee he ends up playing there.

With that said, it would certainly be neat to see him sport the same orange and blue that his father sported nearly two decades ago. The 6’5’’ high school sophomore (Class of 2025) is currently playing varsity basketball for Christ the King High School in Queens, New York and is expected to do big things.

RELATED: What Grade is Bronny James In and 20 Other Athlete Children Who Took After Their Parents

15 Kids of Athletes Who Have Bright Futures in Sports

If Kiyan makes it to the NBA one day, he’ll have some big shoes to fill. After winning the 2003 National Championship with Syracuse, Carmelo spent the next 19 seasons in the NBA – he’s currently a free agent. He has averaged 22.5 points, 6.2 rebounds, 2.7 assists, and 1.0 steals per game over his career.

It would be hard for Kiyan to duplicate that level of success – it’s something only a handful of players will achieve in the NBA – but that doesn’t mean it’s impossible. We’ve seen kids of athletes go on to have better careers than their parents, so who knows. Maybe that’s what we’ll witness with Kiyan in 3-5 years.

Charlie Woods is the 13-year-old son of Tiger Woods and there’s belief that he could be just as good – if not better – than his father. Just a few months ago, Charlie shot a career-low of 68 during the final round of the Notah Begay III Junior National Golf Championship at Mission Inn Resort in Howey-in-the-Hills, FL.

As for Tiger, he’s nearing the end of his illustrious career – which began in 1996. He’s one of the greatest golfers of all-time with records that may never be broken. He’ll be pairing with his son at the 2022 PNC Championship. They were paired together last year and ended up placing second in the tournament.

Manny Ramirez Jr. is the 19-year-old son of Manny Ramirez. A freshman at Tallahassee Community College, he was also a member of the Brockton Rox of the Futures Collegiate Baseball League this past summer. He was on the same team as four other MLB players’ sons – which we’ll get into down below.

D’Angelo Ortiz is the 18-year-old son of David Ortiz. He played on the same Rox team as Manny Ramirez, which is ironic because Ortiz and Manny were teammates on the Boston Red Sox for eight years – they won two World Series together. Now, their teenage sons are playing together – how cool!

D’Angelo is a third baseman who currently plays at Miami Dade College. “We’re not trying to be our dads. When people put you on a pedestal, they look up to you and they try to see what they can take from you. We’re all individually so proud to come from who we come from,” he said in an interview earlier this year.

Kade Foulke is the 18-year-old son of Keith Foulke. He was also a member of the Rox team earlier this year that featured both Ramirez and Ortiz. Coincidentally, his father was teammates with David Ortiz for three years and Manny Ramirez for two years – they were all on the 2004 World Series team together.

As for Kade, he’s currently a freshman at Galveston College. He’s a pitcher, just like his father. He didn’t pitch too well this summer at the Futures Collegiate Baseball League, going 0-2 in 13 games (3 starts). He had an 8.71 ERA and had 20 earned runs in 20.1 innings pitched.

Pedro Martinez Jr. is the 22-year-old son of Pedro Martinez, who spent 18 seasons in the MLB between 1992 and 2009. You won’t believe me when I say this, but Pedro Martinez was a member of that famous 2004 Boston Red Sox team that won the World Series that year – along with Ortiz, Ramirez, and Foulke.

And you definitely won’t believe me when I say this, but his son was a member of the same Brockton Rox team this summer that featured Kade, D’Angelo, and Manny from above. Not only were their fathers teammates, but they could now say they were teammates as well. Funny how things came full circle.

While that technically makes him rivals with Ortiz, Ramirez, Foulke, and Martinez, his son – Jaden – can’t say the same with the other children. In fact, Jaden was also on the Brockton Rox this summer, along with Manny, Pedro, Kade, and D’Angelo. Now, Jaden is a sophomore outfielder at Georgetown University.

Christian Sheffield is the 13-year-old son of Gary Sheffield – the younger brother of Jaden. And just in case you were wondering if the baseball genes run in the family, they do. Christian is already garnering a lot of attention from scouts, even though he doesn’t graduate high school until 2026 – he’s only 13!

He’s an infielder with a beautiful swing and is already standing 5’11’’ and 160 pounds. What’s scary is that he’s only going to continue to grow and improve. By the time he graduates high school, he could be well on his way to the MLB. If you’re looking for an up-and-coming player to watch, Christian’s your guy.

Noah Sheffield is the 16-year-old son of Gary Sheffield – don’t worry, he’s the last Sheffield on this list. He’ll be graduating high school in 2024 and is already making a name for himself, especially with his swing – resembling that of his father. Noah knows what it takes to succeed, he just needs to execute.

He was invited to the Breakthrough Series at the Jackie Robinson Training Complex earlier this year. “You need to work 10 times harder than everybody. You need to put forth more effort than everybody because when you get looked at, you only have one opportunity, and you don’t want to miss your opportunity,” he said to reporters.

Bronny James, also known as LeBron James Jr., is the 18-year-old son of LeBron James – who is currently in his 20th season in the NBA. LeBron has long discussed his intent to one day play in the NBA with his son. If Bronny continues to improve his game, which he has been, that could very well come true.

Bronny is currently a senior at Sierra Canyon School, playing in his final year of high school basketball. He has already received offers from Memphis, USC, UCLA, Oregon, Ohio State, and Michigan. He’s listed as a four-star recruit, but he has all the tools to succeed if he can put forth the commitment.

Bryce James is the 15-year-old son of LeBron James and younger brother of Bronny James. While Bryce spent his freshman year on Sierra Canyon’s JV basketball team, he has moved up to the varsity squad as a sophomore this season. He has been playing lights out so far this year, alongside his older brother.

In fact, Bryce is one of the most talked about high school basketball players right now and it’s not just because of his father – the 15-year-old can ball. He also looks the part, with some reports suggesting he’s up to 6’6’’ now. His size combined with his ability as a combo guard is what’s going to set him apart.

As for Max, he’s currently a junior at Texas A&M University after spending his first two years of college at LSU. He has played 22 games in his career, throwing for 4,401 yards and 38 touchdowns. In his first season with the Aggies, he has played in four games and thrown for 517 yards and three touchdowns.

Cristiano Ronaldo Jr. is the oldest son of Cristiano Ronaldo, one of the greatest footballers of all-time. Ronaldo has appeared in 949 matches in his club career since 2002, scoring 701 goals and dishing 223 assists during that time. He has also scored 118 goals for Portugal, the all-time international record.

While his father’s illustrious career is far from over, Cristiano Ronaldo Jr. is making a name for himself – despite being just 12 years old. He has been putting his talent on full display at the Manchester United Academy as he prepares to follow in his father’s footsteps, who has a history with Manchester United.

Kai Rooney is the 13-year-old son of Wayne Rooney, another Manchester United all-time great who’s watching his son follow in his footsteps. Wayne appeared in 764 club matches over his career, scoring 313 goals and dishing 170 assists. He also scored 53 goals for England, the most in England history.

And while Wayne was teammates with Ronaldo at Manchester United, they’re now watching their sons – Kai and Cristiano Jr. – team up at the Manchester United Academy. They mesh well together and both have a bright future in the sport, already garnering a lot of attention before entering their teens.

His son, E.J., is currently a junior at Stanford University. He was in the midst of the best season of his career this year, totaling 269 yards and 4 touchdowns – both of which are career-highs – through just three games. Unfortunately, he was ruled out for the rest of the season due to an undisclosed injury.

Cha’iel Johnson is the 17-year-old daughter of Chad ‘Ochocinco’ Johnson, who spent 11 seasons in the NFL between 2001 and 2011. During his illustrious career, he had 766 receptions for 11,059 yards and 67 touchdowns. He was a six-time Pro Bowler and two-time All-Pro wide receiver, known for his confidence.

Kids of Athletes Who Have Already Found Success

If Kiyan Anthony makes it to the NBA, he’ll join a long list of other kids of athletes that followed in their athletic parent’s footsteps. A perfect  example of this is Vladimir Guerrero Jr., who is already off to an incredible MLB career – his father, Vladimir Guerrero Sr., had himself a Hall of Fame baseball career.

YOU MAY ALSO LIKE: 15 Kiddos Following in Their Athletic Parents’ Footsteps

Athletes aren’t always going to see their children grow up to be as athletic as them, but it makes for a great story when it does happen – just look at the names above. Don’t worry, the sports universe is filled with kids of athletes ready to prove their parents aren’t the only successful ones in the family.