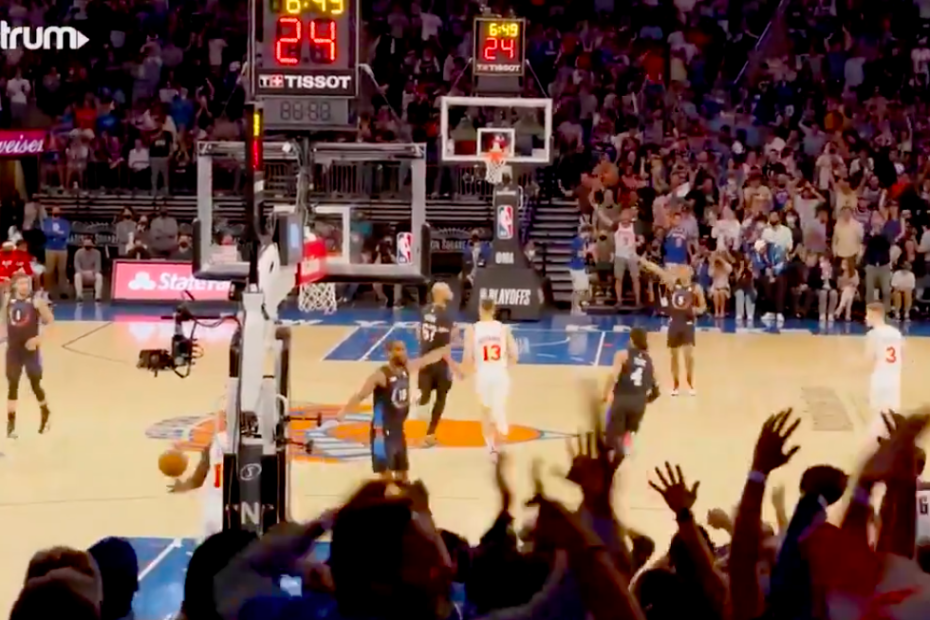 The last time the New York Knicks were in the playoffs was 2013. Eight years later, the Knicks are back in it. And the Big Apple is ecstatic.

The fans were just happy to see them back. And even more to see them…win.

RELATED: Knicks’ Julius Randle’s Son Wanted the Ball So Badly That He Forgot He Was Playing Basketball and Started Wrestling

“You guys pushed us through the whole game,” Julius Randle said ‘in (a MSG Networks) on-court interview following the win’ per the New York Post’s Mark Fischer.

The Knicks got to this year’s playoffs as the fourth-seed. At home at Madison Square Garden in front of its fans, hosting the Atlanta Hawks, they barely lost in game one, 107-105.

Then, on Wednesday, it happened.

It really was a team effort. Julius Randle put up 15 points, 12 rebounds, and four assists. Derrick Rose led the team with 26 points (along with four boards and four assists), Reggie Bullock had 15, RJ Barrett had 13 and eight boards, Alex Burks had 11 and eight boards, Taj Gibson had six points and seven boards, and Obadiah Toppin had eight points. That, along with the home crowd support, helped the Knicks get to a playoff win.

“…We tied up the series, so gotta go on the road, take care of business, and try to come back here and finish it off,” Randle said in that same interview with MSG Networks after the game.

They’re going crazy celebrating this win, soaking it in.

Meanwhile, in Atlanta, Hawks fans are probably just ready to cheer on their squad because this series is now even at one game a piece. It’s a new slate. It’s a whole new ballgame. Game three tip off is set for Friday.

This should be an exciting series moving forward because you already know Trae Young and company are ready to get it done in the A-T-L.