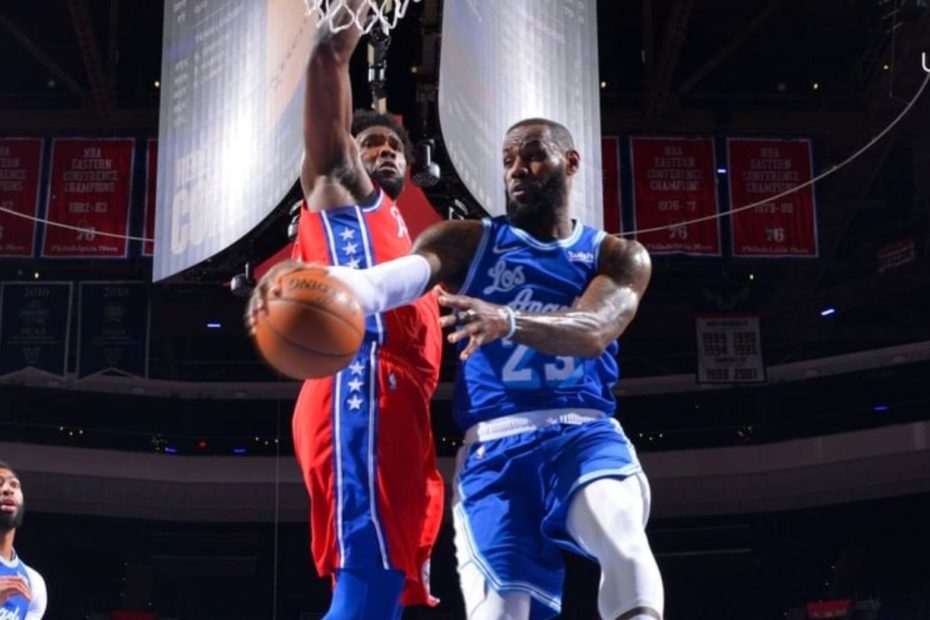 RELATED: LeBron James Celebrates Championship With a FaceTime Call to His Mom

Could this type of year lead to a back-to-back title for the Lakers? We shall see. So far, it’s looking good for LA.

But a solid test came recently to see how this first-ranked Western Conference team would fare against the East’s first-ranked team, the 76’ers.

And the game got a little testy, if you will, when it came to flagrant fouls that were called.

In the third quarter, with 5:45 left to go, Philly leading LA 68-63, Joel Embiid went towards the basket with a jump stop, went up for the layup, and James extended his arms out towards Embiid in a pushing-motion.

It was enough to be called a flagrant 1 according to ESPN.

Embiid apparently wasn’t too fond of the foul.

“First of all, I mean, you look at it, that’s a very dangerous play,” Embiid said per ESPN. “I guarantee you that if it was me, I would have probably been ejected from the game, which has happened in the past with me getting flagrant fouls really for nothing.”

But, fast forward just over a minute game-clock-wise and Embiid is called for a flagrant 1 foul of his own on Anthony Davis per ESPN. Embiid was driving towards the basket and appeared to swing his arms towards Davis with his elbow appearing to hit Davis’ nose.

Now, granted, basketball is a physical game. There’s been jokes that today’s game, if you touch someone it’s a foul that’s called. But, it’s good that there are these types of fouls that are called as a deterrent and enforcement so that it doesn’t escalate into something much worse that could be even more harmful or hurtful to a player.

The 76’ers ended up winning this one that went down to the wire, 107-106. Tobias Harris scored with 2.4 seconds left to put the Sixers back up and eventually give them the big win.

As LA Times’ Dan Woike reports (an article mentioned by Fox Sports Detroit’s Greg Kelser during the Lakers vs Pistons broadcast): “A night that began with a moment of silence in remembrance of Kobe Bryant, ended with a game-winning elbow jumper with a familiar number — 2.4 — on the clock.”

Of course, as you may remember, the Lakers wore special jerseys and patches (per the NBA) to honor Kobe and Gigi last season. And this season, according to SB Nation, “they’re still honoring Bryant at every game. On the same night the Lakers introduced the Black Mamba-inspired “KB” patches, they started breaking their team huddles with a “1-2-3 Mamba” chant. Since then, it’s been a part of their tradition, and Frank Vogel expects it to be that way for a while.”

LeBron and co. seemingly are playing with that ‘mamba mentality’ sitting at a 14-6 record. And apparently so are the 76’ers, who sit at a 13-6 record, in what turned out to be an epic game between the teams that came down to the final seconds. “2.4” seconds to be exact.