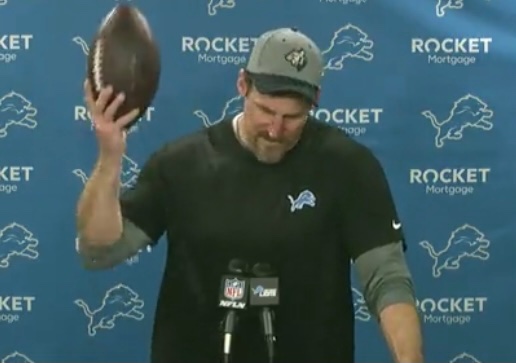 Dan Campbell led the Detroit Lions to their first victory in this NFL season. While he wanted to celebrate the win, his mind was preoccupied with Oxford High School mass shooting that occurred on November 30th.

Securing a win over the Minnesota Vikings, the visibly emotional head coach dedicated the game to those affected by the deadly shooting that took place in Oxford, Michigan. The tragedy took the lives of 4 students and left 7 others injured.

“The first thing I’m going to start with; this game ball goes to the whole Oxford community,” Campbell began, taking to the podium during the after-game press conference. He went to list various victims and the importance of remembering their lives. “I want us to not forget these names: Madisyn Baldwin, Hannah St. Juliana, Justin Shilling, Tate Myre…”

“Those names… will never be forgotten and they’re all in our hearts and our prayers,” he included.

RELATED: How One Bad Game in 2020 Permanently Changed QB Sam Hartman’s Relationship With Mental Health for the Better

Campbell went on to share that he hopes the families of the victims and all of whom have been affected by the disaster know that the Lions wished to ease some of the stress out of the horrific event. “I just wanted them to know exactly what we were going to represent today,” he said before going on to explain, “To me, my thought was, ‘Hey, man, if we can, for three hours, just ease their suffering a little bit, that’s worth it.'”

Jared Goff, quarterback for the Detroit Lions expressed similar views as his coach during the press conference. “You never hope for a tragedy like this, but you hope to be a light for those people and a positive thing that they can have fun watching,” the Lions player commented. “I hope they were all watching today and were able to enjoy that win and we can take their minds off it for whatever it may be, three hours.”

Goff additionally voiced the importance of entertainment as a stress reliever, noting that if he and his team were able to reduce any amount of pain within those affected, that is a powerful notion.

“I hope they were all watching today and were able to enjoy that win and we can take their minds off it for whatever it may be, three hours,” the quarterback stated. “I think any time that we can do that, it’s a lot bigger than our sport, it’s a lot bigger than us and I think today was one of those special circumstances that we were able to rise to the occasion and make something special happen.”