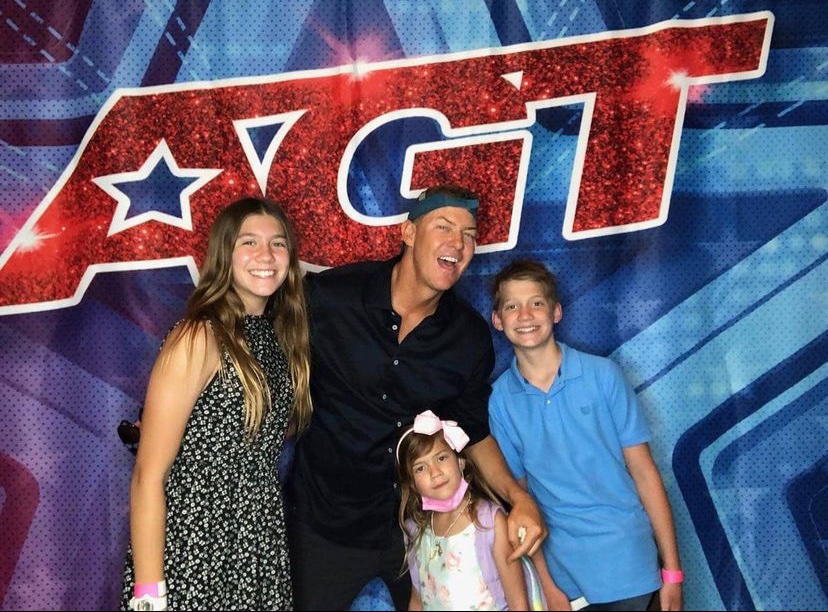 Matt Mauser fought back tears after showcasing an incredible performance in which he felt the presence of his wife, Christina Mauser, who tragically passed away in the same helicopter crash that killed NBA legend Kobe Bryant last year.

On her way to Kobe’s Mamba Academy in Thousand Oaks, California, Christina, alongside the basketball legend, his daughter Gigi, and six others, passed away when the helicopter crashed into the side of a mountain. There were no survivors.

The contestant explained to the judges his reason behind going onto the show, which largely had to do with wanting to continue forward for his children. After the crash, Christina left behind three children in the sole care of their father.

“They are my whole world and I wanted to show them that you have to keep moving forward despite tragedies in life. I want them to look back in 20 years and think ‘Dad didn’t give up, Dad fought’,” said Mauser to the judges.

The singer additionally added that his wife was a motivator in his decision to go onto the show.

“I’m here because my wife and I, we were both school teachers and we retired from teaching so that I could do the music full-time, and she got the opportunity to coach girls basketball with Kobe Bryant. But on Jan. 26, 2020, I lost my wife in the same helicopter crash that killed Kobe Bryant,” explained the 51-year-old.

Mauser gets vulnerable about life after the passing of his wife.

The singer offered the last moments that he shared with his wife. “When she left that day, she kissed me and she said, ‘I love you.’ And that was the last thing my wife ever said to me. Your whole life changes in a second,” he said, tears in his eyes. He continued on to say, “My focus immediately went to my children. You start to say, ‘All right she would want me to carry on.’ She would want our kids to have happy lives, which I don’t know if it’s possible but I’m going to try.”

After the emotional and strong performance in which Mauser sang a rendition of Phil Collins’ song, “Against All Odds (Take a Look at Me Now),” the judges had a lot to say. Howie Mandel felt the strength of the singer through his voice. “We felt your emotion and regardless of what anybody does on that stage, if you’re able to move strangers and we can feel it in our hearts … there aren’t words to describe it,” said the judge.

Simon Cowell went on to ask the contestant what he wishes to happen if he was to move forward in the competition. He responded, “I would like to make sure that my children see that in spite of the grief, that we’ve been through this year, that grief is not going to define who we are as a family. My children see that you have find joy in life and you have to continue. If this could help my children chase their dreams, then I’ll take it.”

With all four judges voting yes, Mauser will move forward into the next round of the competition.

Mauser shared with People during the audition process that he is glad he will be bringing attention to his wife’s charity. He even offered that if he were to win the prize, he would donate it all to the Christina Mauser Foundation.

“I am glad I did it,” said the performer. He went on to add, “I am looking forward to bringing attention to my wife’s charity, the Christina Mauser Foundation, that supports high school senior female athletes with athletic scholarships. If I were blessed enough to win the show, 100 percent of my earnings would go to Christina’s foundation. Christina loved nothing more than to empower young females in life so this is a great way to keep her legacy alive.”

You Can Watch Matt’s Full Audition Below: