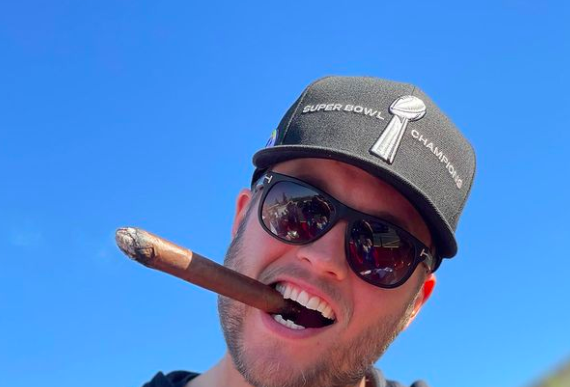 Los Angeles Rams quarterback Matthew Stafford admitted that he didn’t have an appropriate reaction when a photographer fell in front of him following his 2022 Super Bowl victory.

A video clip of the 34-year-old athlete went viral when he was seen walking away after photographer Kelly Smiley fell off a platform in front of him and his wife. However, the athlete and his wife, Kelly Stafford, relayed that he did end up apologizing to the photographer and asked his wife to make sure she wasn’t badly injured.

“There was a photographer who stepped off the back of the stage, and asked if we wanted a picture,” Kelly explained as she recalled the accident. She added, “and when she did, when she offered, she stepped back and fell. It was an awful, awful moment.”

“Matthew looked at me and said ‘check her,’ and turned around,” she continued, remembering the incident. “I went straight to her and I could see she was O.K.”

The couple discussed the incident on Kelly’s podcast The Morning After, in which the quarterback explained that it was a fluke-of-the-moment accident, and he regretted his initial reaction. Stafford shared that he asked an NFL editor to ask how Smiley was doing after the fall. After checking up, the Stafford’s discovered she had injured her spine.

Referring to his reaction, the quarterback commented, “Yeah, I mean, that obviously happened really quickly and suddenly and unexpectedly, and wish I had a better reaction in the moment.”

“I didn’t. I apologized to her for that, but glad that all in all she’s doing all right,” he continued. He went on to note that it was a learning experience and summed up the situation as, “one of those things you try to train your reactions to be a little bit better next time. Other than that, it was a great day.

His wife held similar sentiments and justified his claim with the statement, “Life is about learning, and here we are.”

In addition to the couple’s apology, they offered to pay for Smiley’s medical expenses on top of broken photography equipment. A GoFundMe was set up for Smiley, but promptly disabled after the athlete offered to reimburse her.