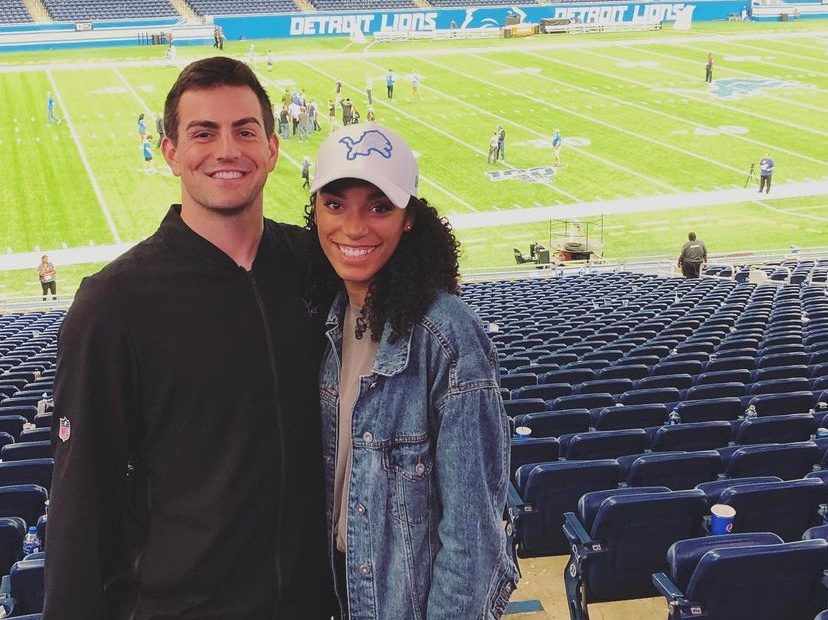 Colombian-American athlete, Melissa Gonzales, has just qualified for the 400-meter hurdle semi-finals at the 2020 Tokyo Games. While the world watched the track star perform with an astonishing time of 55.32 seconds, what was perhaps as equally entertaining was her husband’s reaction.

Detroit Lions quarterback and husband to Gonzales, David Blough, quite literally jumped out of his shoes in excitement during the Olympic watch party as he saw his wife finish in second place and set a Colombian national record.

It is also probable that this is not the first time Blough has been this excited to see his wife perform, as they have been together since high school and married in 2019. Essentially, he has had many years to exhibit such awe at the endeavors of Gonzales, especially since she is a four-time gold medalist.

Representing South America, the Olympian is a dual citizen of the United States and Columbia and has earned gold in the 400-meter hurdles and 4×400-meter relay in both 2019 and 2021.

RELATED: Olympic Swimmer Ryan Murphy Thinks the 2020 Tokyo Games Might Not Be ‘Clean’, But Congratulates His Opponent

In an interview with The Athletic, Blough discussed what goes through his mind when he watches his wife run. He is no stranger to high-stakes games, as he himself has been playing with the Detroit Lions since 2019, but he offered that seeing his wife during her competitions is even more stressful.

When asked how he reacts when she runs, Blough commented, “Way worse. Way worse than running out through the tunnel on Thanksgiving or in any game I’ve ever played in.”

“I’ve seen the work that she’s put into it, and I want so bad for her to be successful. I want so bad for her dreams to come. What she’s achieved now is kind of what she’s been running for every single time she’s taken the track. We wanted it so bad. And I just wanted it for her,” Blough went on to explain. He additionally included, “It’s only 55 seconds but, man, it is gut-wrenching the whole time.”

Surely, the athlete’s husband will also be cheering her on during one of three semifinal heats that occur on Monday. While the Lions are expected to resume training for their upcoming season on the same morning of her race, no one would blame Blough if he showed up a bit late.