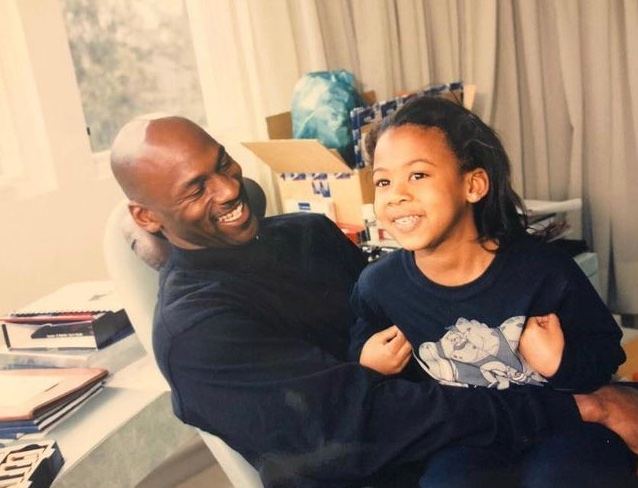 Michael Jordan is a household name throughout the world due to his incredible talents on a basketball court. Being known as a strong and dedicated athlete, many may find it shocking to learn that the NBA star has ‘turned soft’ after becoming a grandfather.

Sitting down for an interview with the sports media outlet TOGETHXR, the basketball icon’s daughter, Jasmine Jordan-Christmas, was happy to discuss her father’s change of heart once her son was born.

“Michael Jordan, the grandpa, is soft,” she reported in the interview. She went on to include, “My son definitely has my dad wrapped around his finger. He loves being a grandfather, and my son is his first grandchild.”

The 28-year-old mother is partners with the former Indiana Pacers player, Rakeem Christmas. Together, they are raising the 2-year-old buddle of joy, Rakeem Michael Christmas Jr. With basketball talent literally embedded in their son’s DNA, he certainly has a bright future to look forward to. However, considering his background, his mother anticipates there will be some unwanted pressure on her son.

“That competition, and that, that drive is really going to be in my son’s corner,” said Jasmine. “And he’s going to be able to experience that from a grandfather’s lens. So the pressure won’t be as hard on my son, but it’ll definitely be there.”

Jasmine discusses growing up with Michael Jordan as a father

As the third oldest child of the 58-year-old athlete, Jasmine has a very unique experience due to her father. As of 2018, she even began working for her father’s company and currently runs the brand as a sports marketing field representative.

“I think the stigma that is applied to children with successful parents is definitely one that is unavoidable,” Jordan-Christmas explained. She also noted, “And at the end of the day, it’s up to us to really pave our own way and pave our own path and understand that no matter what the expectation is, the pressure doesn’t go away.”

Despite her father’s superstardom, Jordan-Christmas insisted that her childhood was just as average as anyone else’s. She commented during an interview with The Undefeated, “He was very involved during my childhood. He would pick me up from school, take me to my activities and be around as much as he could while still juggling practice and becoming the icon he became.”

She added the heartwarming sentiments, “But as I remember, he was there. He was as present as he could’ve been, and when he wasn’t I always felt his presence. He was very involved in my life and anything I had going on during those times. So I’m appreciative of the father he was then and how he is today.”