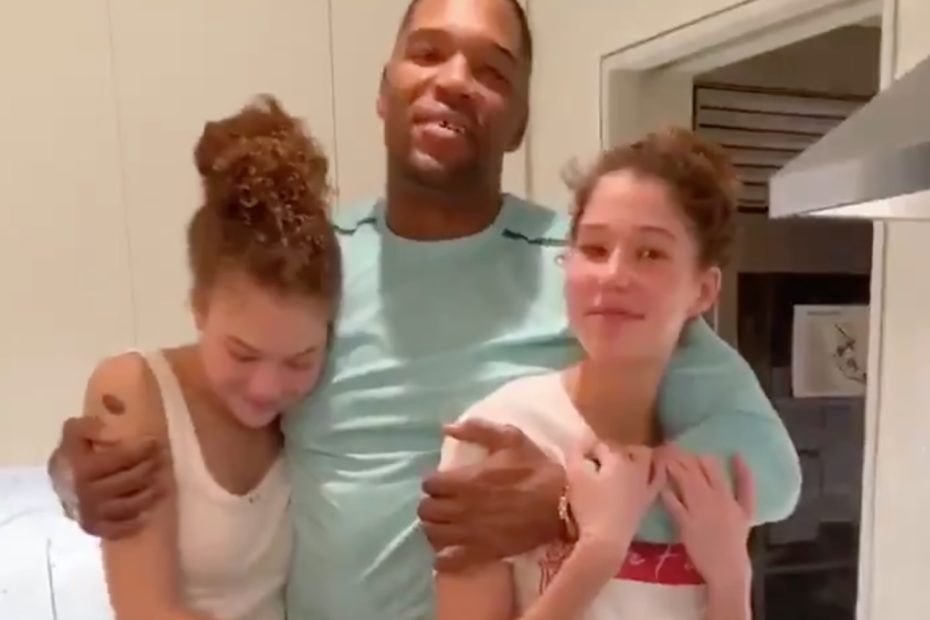 Over the last year and a half, we saw families all over the world be separated from each other due to the severity of the pandemic. That was the case for Michael Strahan and his twin daughters.

As At the Buzzer reported back in June 2020, nearly a month and a half after Micheal Strahan shared a screenshot of himself FaceTiming his twin daughters, who were quarantining in North Carolina with their mom while he was still in New York City, the father-daughter trio is back together again.

In celebration of Memorial Day, the dad shared a three-minute video of him with his twin daughters, 15-year-olds Sophia and Isabella. At the start of the video, Strahan joked that while Sophia is helpful in the kitchen, Isabella spent most of her time on her phone waiting for their dinner to be served.

The rest of the video showed how Sophia and the former football player turned Good Morning America host prepared their feast. The chefs grilled some marinated steak and shrimp, roasted some sweet potatoes, and created a vegetable medley that either has basil or cilantro in it.

Sophia and Strahan disagreed on which herb was added to the bowl. Dad says “trust me, it’s basil,” while Sophia says, “no, dad, it’s cilantro.”

“Thank you, Sophia, well done. Thank you, Bella, well done on the couch,” Strahan joked at the end of the video.

As At The Buzzer previously reported, this particular video comes after reports of Strahan’s custody battle with Sophia and Isabella’s mom, and his ex-wife, Jean Muggli. According to TMZ, the retired athlete has accused Jean of abusing their teenage twin daughters.

Court documents obtained by the entertainment news company revealed that Strahan believes Muggli has been “engaging in a pattern of abusive conduct towards the children for years.” Now, the dad of four is seeking primary custody of Sophia and Isabella, claiming that he has proof of the alleged abusive behavior.

RELATED: Micheal Strahan Posts FaceTime Photo of One of His Twin Daughters Amidst Custody Battle With Ex-Wife

Sophia also took to her own Instagram account to share a video of her, her dad, and their dog taking a stroll through Central Park while holding hands. The adorable duo was also wearing masks in an abundance of caution. Although it’s unclear, it’s believed that Isabella was the one behind the camera.

Now let’s see what Michael Strahan and his twin daughters have been up to over the last year:

Most recently Strahan, his girls, and others were on a sunny vacation together:

“Photo dump from our family vacation. Nothing better than spending time with my kids,” he wrote.

Honestly, nothing beats just hanging with your girls!

And of course, being goofy on TikTok!

Is there anything better than just having a good time with your kiddos?