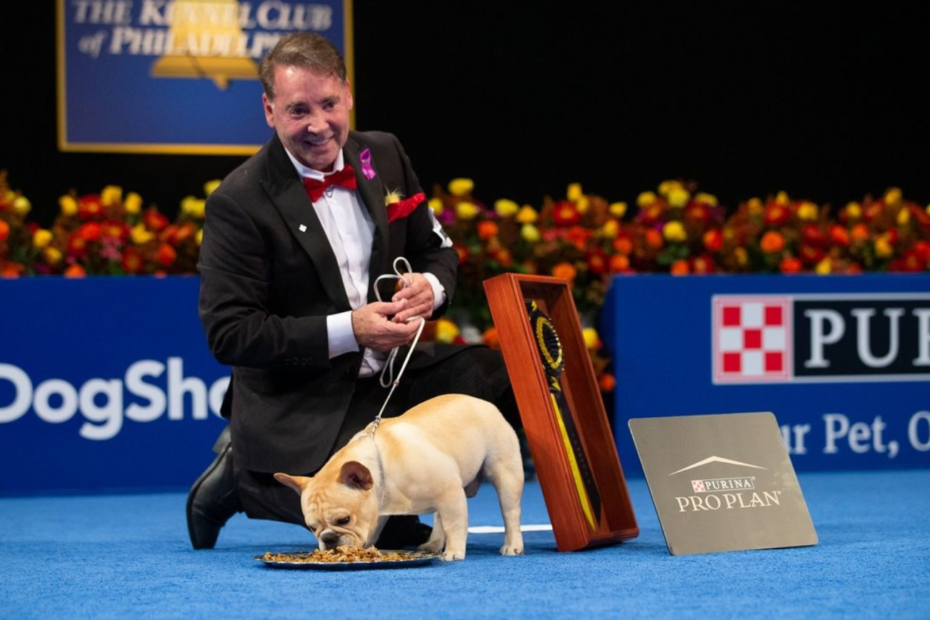 Morgan Fox isn’t the only one in his household having a career year. The 28-year-old Los Angeles Chargers’ defensive end can officially say his French bulldog, Winston, is a Best in Show winner at the The Kennel Club of Philadelphia 2022 National Dog Show – which occurred on Thanksgiving Day.

Winston was one of six dogs to earn a nomination for Best in Show – he came out of the non-sporting category. The other five dogs to advance were Nate (Treeing Walker Coonhound), Cooper (English Toy Spaniel), River (German Shepherd), Sloane (Irish Water Spaniel), and Reus (Alaskan Malamute).

“The French Bulldog fit the map of which the breed was designed. He has a beautiful face, excellent movement, and a perfectly rounded loin. He had that razzle dazzle that said, “I’m here to win it tonight!” said judge Mrs. Vicki Seiler-Cushman. He’s the first French Bulldog to ever win the prestigious award.

Other Famous Athletes Who Are Proud Dog Owners

Winston’s success came towards the end of a 2022-23 NFL regular season that saw his owner, Morgan Fox, resurrect his career in his first season with the Chargers. He signed with the team last offseason following a down year with the Carolina Panthers, but put up career-highs in most statistical categories.

In 17 games, Fox recorded 38 tackles, 8 tackles for loss, 11 quarterback hits, and 6.5 sacks – he started 12 games, which is also a career-high. He played an integral part on the Chargers’ defensive line with Joey Bosa down with injury, ultimately finishing the season with the second-most sacks on his team.

Morgan Fox and his Chargers couldn’t continue that success into the playoffs – losing to the Jaguars in the Wild Card. It was a tough way to end the season, but he gets to return home a proud dog owner to an adorable French Bulldog. To celebrate, here are some other athletes who are proud dog owners.

As early as last year, Serena Williams the proud owner of two dogs – Lauerlei Linkogle Williams and Christopher Chip Rafael Nadal. Unfortunately, she announced the ‘end of an era’ on August 27th when Lauerlei passed away after 18 years of lovin’. Meanwhile, her other dog has his own Instagram account.

And yes, you read that right – part of her dog Chip’s name is Rafael Nadal, a fellow all-time tennis great. Williams has won 23 Grand Slam singles titles, while Nadal has won 22 throughout their legendary careers. Unfortunately for tennis fans, Williams recently retired and Nadal is nearing that emotional day.

On Christmas Day 2020, just a few months after winning a World Series with the Los Angeles Dodgers, Mookie Betts shared a family photo that included himself, his then-2-year-old daughter, and a ‘new baby’ named Draco – an adorable puppy. A few weeks later, Betts finally proposed to his longtime girlfriend.

Russell Wilson and his wife, Ciara, recently made the move from Seattle to Denver after the star QB was traded in the offseason. To commemorate the move, they welcomed a new puppy into their life and now have four, including their three massive Great Danes. With three kids as well, they have a full house.

Unfortunately for Wilson, his first year with the Denver Broncos didn’t quite go as planned. He finished the season with 3,524 yards, 16 touchdowns, and 11 interceptions – only leading his team to a 4-11-0 record as started, the worst of his career. His 16 TDs were also a career-worst as he struggled from the jump.

Mike Trout is the proud father of two adorable puppies – Juno and Josie Trout. The puppies used to have their own Instagram account, but it hasn’t been updated since 2019 – it’s important to note that he welcomed his first child in 2020 with his wife, Jessica Cox, which could have something to do with it.

Patrick Mahomes is the proud dog dad to two adorable dogs – Steel and Silver, a pit bull and cane corso. He first became a dog parent when he gifted his then-girlfriend and now-wife Brittany Matthews with a dog in 2017. The couple now have a soon-to-be 2-year-old daughter and 2-month-old son at home.

Mahomes has established himself as one of the greatest quarterbacks in the league. In just six seasons, he has thrown for 24,241 yards, 192 touchdowns, and 49 interceptions – adding another 12 TDs on the ground. His Chiefs are 64-16-0 with him under center and have already won a Super Bowl with him.

Simone Biles isn’t shy about being a proud dog owner – her two French Bulldogs, Lilo and Rambo Biles, have their own Instagram account with more than 80,000 followers. The adorable ‘Frenchies’ gained a brother when Zeus – an English bulldog owned by Biles’ fiance Jonathan Owens – joined the family.

Anthony Edwards is a man of extreme confidence – something he proves on the basketball court each and every game. Apparently, that confidence doesn’t falter at home and even reciprocates with his dog, who he named Anthony Edwards Jr. – if you’re wondering why, it’s because the talented dog can do it all.

Juju Smith-Schuster grew up with a deep fear of dogs, stemming from an experience he had in grade school when he was chased by a chihuahua. In 2017, shortly after being drafted into the NFL, Juju decided it was time to get a dog of his own after several years of having positive interactions with them.

That’s when he welcomed Boujee into his life – a French Bulldog that’ll put a smile on anyone’s face. The now-5-year-old Frenchie is in Kansas City with his father, has an Instagram account with nearly 200,000 followers, and Boujee’s favorite song is – according to the Instagram bio – ‘Bad & Boujee’ by Migos.

Throughout most of Tiger Woods’ career, he had two friendly pups by his side – an all-white Labradoodle named Yogi and a Border Collie named Taz. Unfortunately, their health started to deteriorate as they grew older and Woods eventually had to say goodbye to his furry friends in 2019. It was an emotional time.

In 2015, four years before Yogi and Taz passed away, Woods adopted a Border Collie and Springer Spaniel mix named Bugs. In 2019, with Yogi and Taz now gone, he welcomed a new puppy into his home – an Australian Shepherd named Lola. Woods has always been a lover of animals, but especially dogs.

Lindsey Vonn began 2022 as a proud parent to three adorable and friendly dogs – Leo, Lucy, and Bear. The trio were always a hit on social media whenever they made an appearance, but Vonn shared the unfortunate news on January 22, 2022 that her 8-year-old Bear had crossed the rainbow bridge.

A few months later, the all-time great skier revealed a new addition to their furry family – a Belgian Malinoi named Jade. She explained the heavy hole in her life since losing Bear and while her halo puppy will never be replaced, she’s excited to begin a new journey with a new trio – Leo, Lucy, and Jade.

Rob Gronkowski might look like a giant monster when he’s on the football field – standing 6’6’ and weighing 265 pounds – but he’s everything but it off the field. In fact, he’s just a giant kid with a wild sense of humor, obsession with having a good time, and an overwhelming love for his French Bulldog, Ralphie.

Along with his girlfriend, Camille Kostek, Gronkowski operates an Instagram account for his little furry fella and it boasts a cool 57,000 followers. Ralphie loves attention, but also hates not having it and is quick to let you know that with a flurry of wet kisses to the face. You can tell it’s a fun household to be a part of.

Klay Thompson will never shy away from shouting out his best friend, Roccö – who is described as a ‘best friend, K9 model, lap dog, prince’ on the pup’s personal Instagram account. The page boasts more than 64,000 followers – which is more than Ralphie Gronkowski – and posts several times every year.

Thompson has also been open about his pup’s birthday – which he celebrates on April 20th, also known as 4/20. He explained in an interview that he doesn’t know Roccö’s exact birthday, but knows it was at some point in mid-April. “To make things easier, I say the 20th” Thompson told reporters after practice.

Elena Delle Donne is no stranger to sharing viral videos of her dogs and has always been open about her deep love for animals. She first became a proud owner of a dog when she adopted Wrigley, a Great Dane, in 2017 – during her rookie season in the WNBA. That same year, she married Amanda Clifton.

Clifton was already the owner of a rescue dog named Rasta, meaning the family doubled when the two came together. Since then, Delle Donne has established herself as one of the greatest players in WNBA history, especially at her size. She can score from anywhere on the court and has no trouble down low.

Travis Kelce, who is teammates with Patrick Mahomes from above, is the proud father to two pups – a Goldendoodle named Rambo and a Pomerian-Husky mix named Chauncey. The dogs are a huge hit on social media whenever they make an appearance and seem to be the most well-behaved dogs ever!

While he grew up with both cats and dogs in the home, Travis has always preferred a canine companion and stayed true to that sentiment when he started a furry family of his own. And, just in case you were wondering, Kelce confirmed that his pups get more than enough social time with his teammates’ pups.

Cristiano Ronaldo is one of the greatest soccer players of all-time and will forever be remembered for his dedication to the pitch. He’s also a father – not just to five children, but to three dogs. He has a Golden Labrador named Bobby Moore, a Labrador named Marosca, and a Yorkshire Terrier named Abelhinha.

Ronaldo has enjoyed a legendary football career that dates back to 2002, when he made his senior debut. He has more than 700 goals and 220 assists in nearly 950 games in his club career, as well as another 118 goals in 196 international matches with his home country, Portugal. He’s an icon in the sport.

One of the most intense debates of all-time is the ever-so-intense battle between cats and dogs. Some people won’t hesitate to announce their love for canines, but others take the road less traveled and prefer the more independent lifestyle of a cat. For one former NFL running back, he’s taking a strong stance.

“And I hate dogs. I love cats, though. Cats are so cool. Actually, I’m probably gonna get some this year,” said running back Todd Gurley in 2018 – he was a teammate of Morgan Fox with the Los Angeles Rams between 2016 and 2019. Not many athletes are willing to admit they don’t like dogs, but Gurley did.

YOU MAY ALSO LIKE: Big Time Athletes With Big Families!

Not every athlete is going to be a dog person, but they can still be the proud parent of a pet – just look at former NBA player Carmelo Anthony, who once bought a camel as a pet. With National Pet Day being celebrated on April 11th, we’re bound to see plenty of famous athletes share photos of their pets soon!