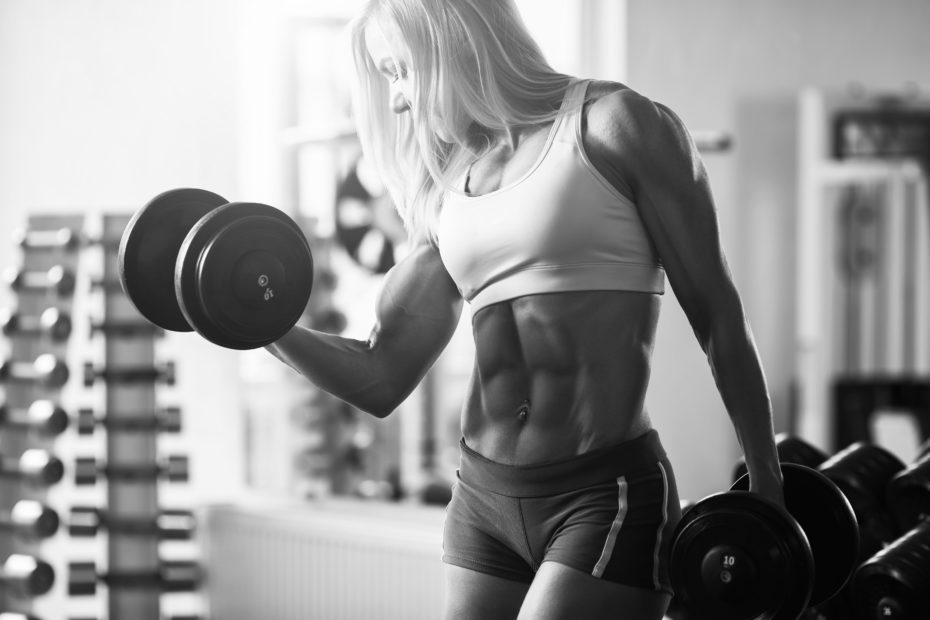 20 of the Most Famous Female Bodybuilders Ever

While some people believe muscles belong on men, the most famous female bodybuilders ever — along with their millions of fans all around the world — respectfully disagree. In fact, it’s safe to say the bodybuilding industry wouldn’t be what it is today if it weren’t for its female athletes.

It was a man named Henry McGhee that originally opened the door for women in the bodybuilding community. While working at the Downtown Canton YMCA, he believed women should have a similar opportunity to showcase their physique as men have had for years.

The first event happened in 1977 and a woman by the name of Gina LaSpina was announced the winner. It wasn’t until 1980 that the National Physique Committee (NPC) and International Federation of Bodybuilding and Fitness (IFBB) started to recognize women in competitions.

RELATED: 20 of the Greatest Underdogs in Sports

Who Are the Most Famous Female Bodybuilders Ever?

Over the past 40 years, the most famous female bodybuilders ever have helped revolutionize the bodybuilding and fitness world. They were instrumental in the development, growth, and evolution of the sport. It’s always incredible to see how much effort goes into what they’ve done.

Especially in today’s day and age where we get an up-close view of the behind-the-scenes of bodybuilding. We can truly start to appreciate all the hard work, dedication, determination, and pure grit that goes into being one of the most famous female bodybuilders of all-time.

Marianna Komlos weighed 197 pounds before she gained any interest in bodybuilding, but eventually started hitting the gym and competing in provincial tournaments as early as 1993. Her strong dedication to the sport resulted in several wins as she entered her peak in 1996.

Melissa Coates began weightlifting at the age of 15 in order to improve her tennis game. After winning the Mid-Canada Junior Girls Championship in tennis, Coates decided to start focusing more on her bodybuilding career. She eventually entered her first contest in the early-1990s.

In 1995, Coates was granted professional status by the International Federation of Bodybuilding and Fitness. It wouldn’t take long for her to notch her first win as a professional, doing so in her pro debut at the 1996 Jan Tana Classic. She later became a professional wrestler and model.

Nikki Fuller played water polo and track and field in high school, but turned her focus to bodybuilding after graduating high school. She weighed 123 pounds at that time, but it didn’t take long for her to gain 20 pounds of muscle. From that moment, her bodybuilding career took off.

Fuller earned her pro card after winning the heavyweight and overall titles at the 1990 NPC Nationals. Her highlight performance came at the 1992 Jan Tana Classic, where she placed first. She never placed higher than 7th place at Ms. International or 9th place at Ms. Olympia.

She placed first in the 1974 Ms. Body Beautiful USA competition by the World Body Building Guild in New York — a competition she placed second the year before. She also won the ‘Most Voluptuous’ trophy at the 1973 IFBB Ms. Americana and ‘Best Body’ trophy in 1974.

Portugues would end up finishing in the top-ten at Ms. Olympia twice in her career. Her highlight performance came when she won the Night of Champions competition. Outside of her bodybuilding career, she has also been featured in a number of films and television shows.

Growing up in Brooklyn, New York, Denise Masino was always interested in the bodybuilding community and used the gym as a safe haven — helping her stay out of trouble. As an amateur bodybuilder, Masino won the 1994 NPC Florida Championships and 1995 NPC Nationals.

Masino made her pro debut at the 1996 Jan Tana Classic, where she finished sixth. In 2003, she finished second at the Ms. International and won her first contest as a professional the same year at Night of Champions. She also placed third at Ms. Olympia in 2003 and second in 2004.

Nicole Bass is a woman of many talents. Outside of being a bodybuilder, she was an actress and professional wrestler — making several guest appearances in soap operas and starring in the World Wrestling Federation (WWF). Her bodybuilding career dates back as early as 1985.

Born in Venezuela, Yaxeni Oriquen-Garcia started dedicating herself to a bodybuilding career in her early 20’s. In 1993, she won four contests as an amateur as she started to turn some heads in the bodybuilding community. It didn’t take long for her to earn her pro card with IFBB.

Oriquen-Garcia made her pro debut at the 1994 Jan Tana Classic, placing 10th in the contest. She peaked in 2005 when she won the Ms. Olympia title — the only Venezuelan bodybuilder to do so. She’s also a five-time winner of the Ms. International competition, including in 2005.

Tonya Knight competed in the NPC USA Championship three times as an amateur, finishing 11th in 1984, 6th in 1985, and 4th in 1986. She would later make her professional debut at the 1988 Pro World Championship, placing 5th before making her first Ms. Olympia the same year.

Knight would place 4th in that 1988 Ms. Olympia and won her first competition a year later at the 1989 Ms. International. Unfortunately, she was later disqualified from both for having a surrogate take a urine test. She returned in 1991 to legally win the Grand Prix Italy and Ms. International.

Ritva Elomaa, better known as ‘Kike,’ has had quite a diverse career over the past 30+ years. She graduated as a radiographer from the Helsinki Nursing School in 1980 before enjoying a brief bodybuilding career. She only competed four times as a pro, but she made them count.

In 1981, Ritva Elomaa shocked the world by finishing in first place at the Ms. Olympia contest — beating out Rachel McLish in the process. She retired in 1983 and has since become a member of the Finnish Parliament. She took office in 2011 as a member of the Finns Party.

Rachel McLish graduated from University of Texas-Pan American after studying physiology and health and nutrition. After founding the Sport Palace Association in Harlingen, McLish felt inspired to enter the world of bodybuilding thanks to encouragement from Lisa Lyon and others.

Though she only competed for four years, McLish became one of the most recognizable names in the sport. She finished in the top-three of every event she entered, winning the 1980 and 1982 Ms. Olympia contests — placing second in 1981 and 1984 — and won the 1982 Pro World Championship.

Betty Pariso grew up playing volleyball, track and field, and ping pong. She didn’t start focusing on her bodybuilding career until her early-30s, largely because she wanted to do away with her ‘stick figure.’ By the 1990s, she was competing at an amateur level in the bodybuilding world.

Pariso won her first professional competition at the 2001 Jan Tana Classic. While that was the only pro win of her career, she made a habit of finishing in the top-five. Born in 1956, she’s an inspiration to anyone over the age of 40 that has aspirations of becoming a pro bodybuilder.

Andrea Shaw began working out at the age of 15 and showed an interest in bodybuilding as early as 17 years old. Her figure career began in 2008, but she quickly took an eight-year hiatus after two competitions. Her physique career began in 2016 and she dominated for three years.

In 2019, she was approached by several female bodybuilders and was convinced to transition to bodybuilding. Since 2020, she has five major title wins, including the Ms. Olympia twice, the Pro League WOS Rising Phoenix Pro Women’s Bodybuilding twice, and the IFBB Omaha Pro once.

Juliette Bergmann started to study fitness training — as well as financial management and journalism — when she completed school. By 1981, she began bodybuilding training and entered her first competition in 1982 (placing in 1st place). By 1983, she knew it was the career for her.

Ana Claudia Macedo Pires will go down as one of the greatest Brazilian female bodybuilders of all-time. She started to gain an interest in bodybuilding at the age of 14 and enjoyed a long and fruitful career in the sport. She’s known as a legend in her hometown of Rio de Janeiro.

Kim Chizevsky-Nicholls played volleyball, basketball, and cheerleading in high school before joining the dance squad and aerobics team in college. She was an aerobics instructor by 1988, but decided to turn her focus towards bodybuilding thanks to her boyfriend’s encouragement.

After nearly placing first in every amateur contest she entered, Chizevsky-Nicholls made her pro debut in 1993. She would win the Ms. International competition in 1993 and 1996 before winning the Ms. Olympia competition four years in a row from 1996-1999. She retired in 1999.

Corinna Everson was a three-sport athlete (gymnastics, track and field, and badminton) at the University of Wisconsin-Madison before marrying a competitive bodybuilder in 1982. She would make her professional debut that same year after winning several competitions as an amateur.

Over the next two years, Everson won a total of seven competitions — including four overalls, two heavyweights, two middleweights, and three pairs/couples. From 1984-1989, Everson won the Ms. Olympia competition six years in a row, truly dominating the sport during that time.

She began training in 1984 and eventually decided to compete in bodybuilding in 1985. Murray made her pro debut in 1990 at the Ms. Olympia competition, finishing in first place and winning it six years in a row before placing second in 1996 and 1997. She won it again in 2002 and 2003.

Iris Kyle is hands-down the most decorated, accomplished, and successful female bodybuilder of all-time. She played basketball at Alcorn State University, but turned her focus to bodybuilding after moving to Orange County. Her first contest was at the 1994 Long Beach Muscle Classic.

Kyle earned her pro card five years later and made her pro debut at the 1999 Ms. International competition. Since then, she has won 10 Ms. Olympia titles (nine straight from 2006-2014), which is the most of any male or female ever. She also won seven Ms. International titles

Who Are the Most Famous Female Bodybuilders Right Now?

The most famous female bodybuilders are the ones we see at the top of the podium the most often. They compete at a high level on a consistent basis, which is why they earn so much praise and inspire the incoming generation of female bodybuilders — continuing the cycle.