Tracy Wolfson earned a degree in communications from the University of Michigan, and has been active in her sports broadcasting career since 2004. She is currently the lead sideline reporter for CBS Sports, specializing in football.

John Schiffren is a sports broadcaster for ESPN and has reported on a variety of sports leagues, including the NFL. He attended Dartmouth College where he studied journalism and played baseball.

Gevrina Catalina is a bilingual sideline reporter based in Los Angeles and has a presence in both English and Spanish sports markets. She actively reports for the Los Angeles Football Club and often does correspondence for ESPN, Fox, and Time Warner.

Jaime Maggio, a two-time Emmy winner, reports for CBS, Fox, and TNT. She is currently based in LA and is partnered up with the marketing director for Sony. She studied mass communications at the University of California, and her career took off in 2000.

She has been successful in her sports broadcasting endeavors ever since, making her one of the most popular NFL sideline reporters. She has done work with both CBS, Fox, TNT, Time Warner, and Comcast.

Jen Hale has been active in her sports broadcasting career since 2012, after completing her master’s of science in broadcast journalism from Northwestern University in Chicago. She has won multiple awards for her work, including an Emmy, and has done most of her reporting for Fox. She is currently one of the most popular NFL sideline reporters on this list.

Melanie Collins started reporting part-time in college and launched her full-time broadcasting career with the Big Ten Network (whom she had interned for) as soon as she obtained her degree from Penn State in 2008. She is currently extremely popular through her broadcasting work with the NFL on CBS Sports.

Olivia Harlan Dekker, daughter of one of the most popular NFL sideline reporters of all time and granddaughter of the former Green Bay Packers chief executive officer, currently works for ESPN and focuses on football. She finished her degree at the University of Georgia in 2014, and her sideling career sparked soon after. She is also partnered with Sam Dekker, a popular NBA player.

Sheree Burruss holds a degree from the University of Wisconsin – Madison in journalism and mass communications. She began her reporting career journey in 2013 for ABC, then NBC, and now works as a sideline reporter for the NFL through CBS.

Charissa Thompson, whose career began with an assistantship in the Fox sports human resources department, has been a highly popular sideline reporter since 2013. She has managed to hold on to her popularity despite her improbable career, which has earned her a position on this list of most popular NFL sideline reporters.

Though her sports broadcasting career began in 2000 after graduating from the University of Florida with a BA in telecommunications, Erin Andrews’ biggest career moves began in 2010, with a position as a co-anchor for College GameDay.

Soon, she was a correspondent for Good Morning America, a CMT Music Awards co-host, and eventually became a sideline reporter for the NFL at Fox in 2014. She has been hugely popular on this network ever since and has rightfully earned herself a place on this list of most popular NFL sideline reporters.

Pam Oliver, another of the more seasoned sports broadcasters on this list, began her journey through sports broadcasting in 1985 as a news reporter in Albany, Georgia after completing her broadcast journalism degree from Florida A&M University, where she also ran track.

She has now been active with both of the biggest sports networks (NBA and NFL) for many years and is famed among sideline reporters all over the country. Additionally, she has been named the recipient of several awards, including Woman of the Year (WISE) and Atlanta Women in Sports Lifetime Achievement Award.

Adam Schefter’s sports broadcasting career took off in 2009, and he has done most of his on-air broadcasting for the NFL Network and ESPN. Before that, he wrote for the Denver Post, following a successful academic career in journalism at the University of Michigan and Northwestern University.

In 1991 after completing her education at the University of Virginia, Melissa Stark began her sports broadcasting career as an intern at the assignment desk in Baltimore. One of the more seasoned reporters on this list, Melissa has been successfully reporting for the NFL Network since 2012, after doing much work for various stations, such as NBC, ESPN, and ABC Sports.

Pat McAfee, whose career started as a player in the NFL, is a very popular sideline reporter and sports analyst. He has even earned the right to his own show in recent years, which is a weekly two-hour daytime event. Additionally, he has done extensive work with Youtube, Fox, and the WWE. His main sports focuses are the NFL and the WWE.

Shannon Spake is a sports news reporter for the NFL and Nascar. She has previously done work through ESPN, Nickelodeon, MTV, and the SEC Network. Before these big-time reporting gigs, Spake worked for some smaller news networks in South Carolina, after completing her degree at Florida Atlantic University, where she was an intern on the Miami radio show Neil Rogers.

Samantha Ponder, married to NFL star Christian Ponder, has been active in sports broadcasting since 2009 and has worked for various broadcast stations, including her local news station where she attended college at Liberty University, then Fox, and eventually ESPN (where she reports today).

Laura Rutledge, who was previously Miss Florida in 2012, majored in broadcast journalism at the University of Florida. She currently works as a sideline reporter for ESPN and is a host for NFL Live.

Amanda Balionis has reported on a variety of sports but mostly reports on golf and football. After broadcasting the 2019 Super Bowl from the sideline, Balionis became CBS’ first-ever social media correspondent.

Liondsay Czarniak, whose career began in 2006, has done an extensive amount of work for NBC, Fox, and even Netflix. She has earned Emmys for herself and is highly popular with viewers and players alike. Her broadcasting passions lie with football and racing.

AJ Ross is a sports anchor for CBS Sports and reported for ESPN and various local networks in the past. She is an Emmy-winning journalist, and proudly holds a degree in broadcast journalism from Howard University.

Jay Feely, who is a former placekicker for various NFL teams, currently reports for CBS. However, he has done work for several networks in the past, including CNN and TNT. Feely is also one of the more widely known celebrities on this list, having even been the butt of an SNL sketch.

Dell, who previously worked for the New England Sports Network reporting primarily on the Boston Red Sox, is now a sideline reporter for CBS Sports. Earning her degree in hospitality and tourism management from UMass Amherst, Jenny Dell was also a cheerleader for her university. Additionally, she is married to Boston Red Sox star Will Middlebrooks, whom she met while reporting on the team.

Michelle Beisner is a popular sideline reporter who is married to a popular sportscaster, Joe Buck. Michelle is a former NFL cheerleader and actress and currently reports on football for ESPN every Monday night. Before joining the ESPN team, she was a popular personality and field reporter on the NFL Network and has done work for various other stations, including Fox, Comcast, CBS, NBC, and ABC.

Jane Brown, who was herself a Division 1 softball player throughout her college career at the University of Florida. Brown began her entertainment career as a reality television host for HDNet and E! In 2003 directly after her college graduation, she eventually was able to report on her passion for sports once again in 2008, when she landed a job with Showtime Sports as a reporter.

She has worked with other networks, such as CBS, ABC, ESPN, CMT, and NBC. She is married to actor Wes Chatham and has earned several Emmys over the years. She is one of the bigger celebrities on this list and has made a name for herself as an influencer and entrepreneur, as demonstrated on her popular website.

Lisa Salters graduated from Penn State with a bachelor’s degree in broadcast journalism and competed on her university’s basketball team as well. One of her most notable achievements is covering the OJ Simpson case on ABC, but she has since moved to ESPN, where she is a sideline reporter for Monday night football.

So there you have it! Which sideline reporter is your most favorite to watch?

25 of the Most Popular NFL Sideline Reporters 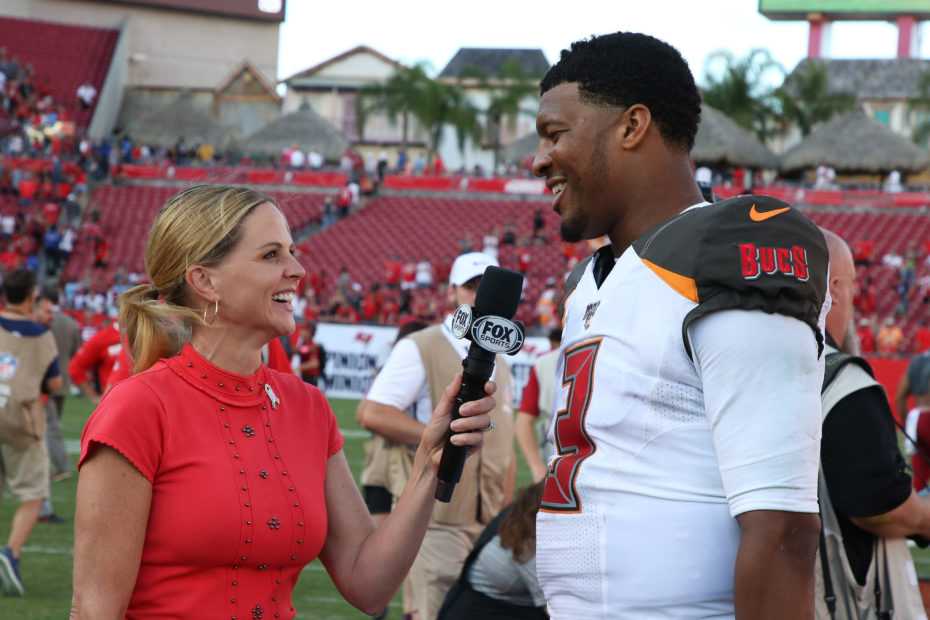 previousKansas City Chiefs’ Willie Gay, 23, Arrested For Criminal Misdemeanor Case
next25 Of The Most Dominant Athletes Of All Time