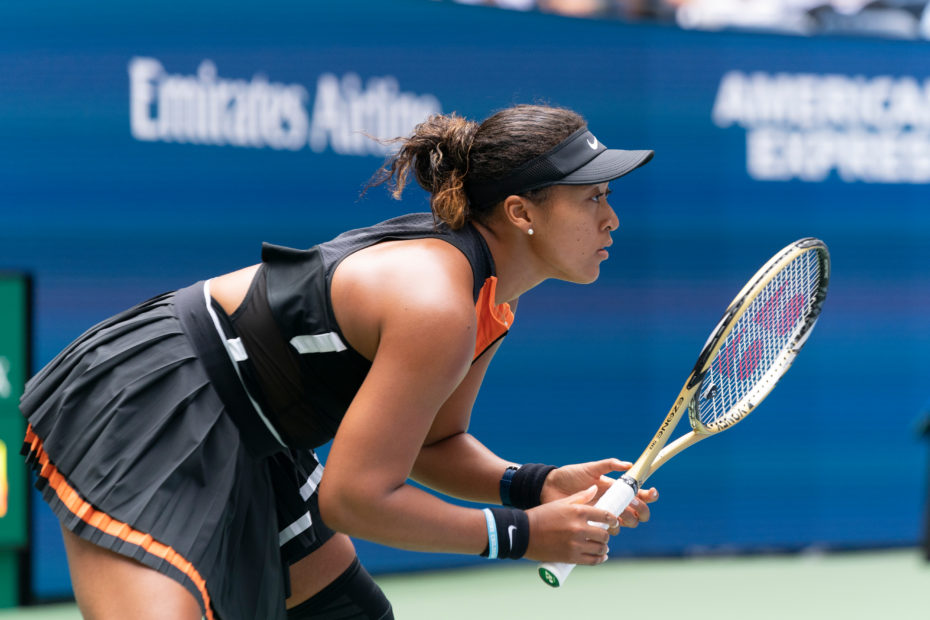 Naomi Osaka Teams Up With LeBron to Start a New Media Company, and 15 Other Sports Stars Who’ve Done the Same

Naomi Osaka is already a tennis star, but she now joins an exclusive list of sports stars that have entered the media, production, and entertainment industry. On Tuesday, the four-time Grand Slam champion announced the launch of her new media company, Hana Kuma.

In fact, she’s not doing it alone. She has partnered with The SpringHill Company – a production company by LeBron James and his business partner, Maverick Carter. They will provide Osaka and her company with essential production, development, and strategic resources.

“What excites me is being able to inspire people and tell new stories, particularly ones that I would have wanted to see when I was a kid,” said Osaka about Hana Kuma – a Japanese phrase that means ‘flower bear.’ The company is already working on its very first project.

RELATED: Athletes With Clothing Brands You Have to Check Out

Other Sports Stars Who Started a Media Company

This is Naomi Osaka’s second major business move this year – the first being the launch of her own athlete management agency named Evolve. She has already signed fellow tennis star Nick Kyrgios and has plans to sign more sports stars in the future. Osaka is building an empire.

Now with a media company under her belt, she is proving that sports stars don’t need to box themselves into one talent. And while many sports stars have outside business ventures and hobbies, one of the most popular ones as of recent is the media and entertainment industry.

Whether they’re interested in making movies, short films, podcasts, blogs, or music, sports stars have always been attracted to the limelight outside of their respective sport. Let’s take a look at 15 sports stars – not named Naomi Osaka or LeBron James – with media companies.

Tony Hawk is one of the greatest, most influential skateboarders to ever live. Between 1995 and 2003, he earned himself 10 gold medals, three silver medals, and three bronze medals at the Summer X Games – most of which in the vert, vert best trick, and vert doubles disciplines.

Through the years, Hawk has committed himself to several business ventures – one of which being 900 Films, a production company based in San Diego, California. He was born in the area and the company’s name derives from Hawk being the first skateboarder to land the 900 trick.

On October 19, 2021, Patterson announced the launch of his film company, Undisputed Pictures, with Joel Reilly. Their first project was David Permut’s new feature, Dock, which is being produced alongside Ice Cube, Jasper Graham, Jeff Kwatinetz, and Alex Astrachan.

Dwayne ‘The Rock’ Johnson is one of the greatest, most influential professional wrestlers of all-time. He was a 10-time world champion, five-time Tag Team champion, and the WWE’s sixth Triple Crown winner. He was the first third-generation wrestler and his daughter will be a fourth.

Since stepping away from the wrestling world, The Rock has become one of the biggest and wealthiest actors of all-time. His production company, Seven Bucks Productions, was created in 2012 and they’ve released everything from films to TV shows, podcasts, and even short films.

Ronda Rousey is one of the greatest, most influential female MMA fighters of all-time. She retired with a 12-2-0 record, was the inaugural UFC Bantamweight Champion, and defended her title six times before losing two straight fights to end her career. She’s now signed to the WWE.

Outside of her professional wrestling, Rousey has gotten herself into acting and even founded a full-scale production company called No DNB Productions. So far, they’ve already produced content for WWE, YouTube Brandcast, Facebook, Steph Curry, iBuyPower, Outlier, and more.

In April of 2021, Anthony announced the launch of his production company, along with business partner Asani Swann, called Creative 7. They already have plans on working with Brad Pitt’s production company, Will Packer, and the team behind ‘Get Out’ and ‘BlacKkKlansman.’

Dwyane Wade is a retired professional basketball player that spent 16 seasons in the NBA – mostly with the Miami Heat. He was a 13-time All-Star, three-time champion, 2006 Finals MVP, and 2008-09 scoring champ. He averaged 22.0 points, 4.7 rebounds, and 5.4 assists per game.

In addition to several other business ventures, Wade founded a production company called 59th and Prairie Entertainment. He signed a multi-year deal with WarnerMedia in 2019 to develop a number of projects after the company produced a documentary chronicling Wade’s life.

Chris Paul is an active professional basketball player that will be entering his 18th season in the NBA. He’s a 12-time All-Star, nine-time All-Defensive, and 2005-06 Rookie of the Year. He led the league in assists five times and steals six times. He was the fourth overall draft pick in 2004.

Paul and his brother, CJ Paul, have been side-by-side throughout the future Hall of Famer’s career. CJ not only serves as president of CP3 Investments and Chris Paul Enterprise LLC, the two brothers co-founded a full-scale production company called Ohh Dip!!! Productions.

Blake Griffin is an active professional basketball player that will be entering his 13th season in the NBA. He’s a former Rookie of the Year, six-time All-Star, and five-time All-NBA player that has averaged 19.8 points, 8.2 rebounds, 4.1 assists, 0.8 steals, and 0.5 blocks per game.

In 2016, Griffin teamed up with retired NFL center Ryan Kalil to launch a production company called Mortal Media. They’ve produced eight film and TV projects since then, including a reboot of White Men Can’t Jump featuring Jack Harlow. They’re also doing a reboot of The Rocketeer.

Tom Brady is an active professional quarterback that will be entering his 23rd season in the NFL. He’s a seven-time Super Bowl champion, 15-time Pro Bowler, three-time MVP, and five-time Super Bowl MVP. He has thrown for 84,520 yards and 624 touchdowns.

In 2020, Brady created a production company called 199 Productions – he was drafted with the 199th overall pick in 2000. He also started Religion of Sports, a sports media production company, more recently in 2022. It’s safe to say that Brady has his hands full at all moments.

Derek Jeter is a retired shortstop that spent 20 seasons in the MLB – all of which with the New York Yankees. He’s a 14-time All-Star, five-time Gold Glove winner, five-time champion, five-time Silver Slugger winner, and World Series MVP. He had a career batting average of .310.

Since retiring, Jeter has opened up several business interests – including the launch of The Players Tribune – a media platform for athletes to share their unfiltered opinion. He also owns Jeter Publishing, which produces books and films. He also invests in Whistle Sports Network.

Sue Bird is an active professional basketball player that is currently playing in her 19th season in the WNBA. She was the first overall draft pick in 2002 and has been selected to 12 All-Star teams ever since. She recently announced that this will be her final season in the WNBA.

We might not see Bird on the court past this season, but she has a lot of things planned during retirement – including the launch of her new production company called Together with Chloe Kim, Alex Morgan, and Simone Manuel. It aims to give women a more robust voice in media.

Kim is one of the four legendary female athletes that created Togethxr – along with Bird, Morgan, and Manuel. The company is described as an ‘unapologetic platform where representation and equality is the norm.’ They’re focused on ‘rich storytelling rooted in lifestyle and youth culture.’

Alex Morgan is an active professional football (soccer) player that made her pro debut in 2008. She has played most of her career with Portland Thorns FC and the Orlando Pride. She has also played for Team USA’s women’s national team, scoring 115 goals in 160 appearances.

Morgan is one of the four legendary female athletes involved with Togethxr – along with Bird, Manuel, and Kim. According to the company’s website, they aim to ‘shatter the often narrow depictions of women in the media’ with diverse, inclusive, and community-driven content.

Stephen Curry is an active professional basketball player that will be entering his 14th season in the NBA – all of which with the Golden State Warriors. He’s a four-time champ, two-time MVP, one-time Finals MVP, and eight-time All-Star that led the league in scoring twice in his career.

Outside of his success on the court, which includes being the defending champion and winning four of the past eight championships, Curry founded Unanimous Media  – a production company that produces television, film, and digital content. It’s named after his unanimous MVP award.

Kevin Durant is an active professional basketball player that will be entering his 15th season in the NBA. He’s a 12-time All-Star, one-time MVP, two-time champion, two-time Finals MVP, and four-time scoring champ. He averages 27.2 points, 7.1 rebounds, and 4.3 assists per game.

Along with his long-time business partner Rich Kleiman, Durant founded Thirty Five Ventures – a company involved in investments, film, media, philanthropy, and more. The company has produced eight film and TV projects, as well as Boardroom – a full-scale media network.

Naomi Osaka continues to confirm what many of us already know – sports stars are capable of just about anything when they put their mind to it. We’ve come a long way from the ‘shut up and dribble’ criticism and it’s because of sports stars like LeBron constantly pushing boundaries.

Osaka and her new media company, Hana Kuma, are working on their first project – a documentary about Patsy Mink, a former Hawaiian congresswoman. She’s best-known for being the first woman of color elected to United States Congress and for sponsoring Title IX.

YOU MAY ALSO LIKE: What These 20 Athletes Have Done Following Retirement

As for LeBron James, he’s been doing this for a while. The SpringHill Company has already released five films – including Hustle and Space Jam: A New Legacy – and has four more films on the way. They’ve also produced seven television shows with another show on the way.