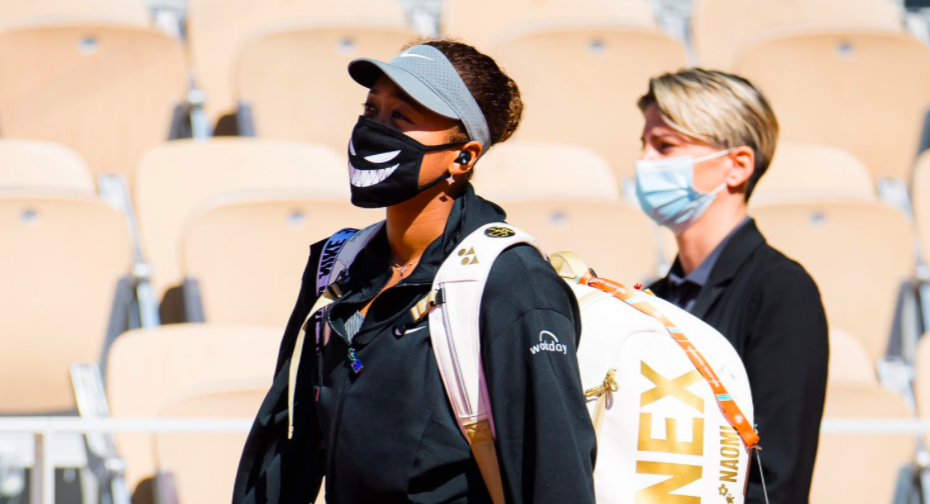 Naomi Osaka is ranked second in the world in women’s singles tennis. Second. She also has won four Grand Slam tournaments, one each year since 2018. The US Open in 2018, when she won her first Grand Slam against the player she’s looked up to on the court, Serena Williams. Then, took home the Australian Open in 2019, the US Open again in 2020, and the Australian Open again recently this year.

Now, with the first round of the French Open underway, Osaka won’t be there competing. She was there, literally, preparing for the tourney, getting ready to compete, and at the site of where the open takes place at Roland-Garros (as she tweeted about on May 25 from one of the clay courts).

But, here’s what’s transpired since May 26.

May 26. Osaka announces she won’t conduct any press conferences during the French Open:

“Hey everyone-Hope you’re all doing well, I’m writing this to say I’m not going to do any press during Roland Garros,” Osaka said in a statement that she tweeted. “I’ve often felt that people have no regard for athletes(‘) mental health and this rings very true whenever I see a press conference or partake in one. We’ve often sat there and asked questions that we’ve been asked multiple times before or asked questions that bring doubt into our minds and I’m not just going to subject myself to people that doubt me.”

Osaka went on to mention how athletes after a loss are being kicked while they’re down at times.

“Me not doing press is nothing personal to the tournament and a couple journalists have interviewed me since I was young so I have a friendly relationship with most of them,” Osaka said. “However, if the organizations think that they can just keep saying, ‘do press or you’re gonna be fined’, and continue to ignore the mental health of the athletes that are the centerpiece of their cooperation then I just gotta laugh.”

Osaka went on to say she hopes what she would “get fined for this will go towards a mental health charity. xoxo…”

May 30. Osaka wins her match against Romania’s Patricia Maria Tig in close straight sets, which went to a tiebreaker in the second round (6-4, 7-6).

But, instead of playing in the next round here’s what she announced on Monday .

May 31. Osaka decides to “withdraw” from the tournament altogether:

“Hey everyone, this isn’t a situation I ever imagined or intended when I posted a few days ago,” Osaka said in the statement she tweeted. “I think now the best thing for the tournament, the other players and my well-being is that I withdraw so that everyone can get back to focusing on the tennis going on in Paris. I never wanted to be a distraction and I accept that my timing was not ideal and could have been clearer. More importantly I would never trivialize mental health or use the term lightly. The truth is that I have suffered long bouts of depression since the US Open in 2018 and I have had a really hard time coping with that.”

If you remember that US Open, Osaka’s first major win, you know it didn’t come without a lot of pain. USOpen.org’s Ashley Marshall described it like this: “But Osaka’s impressive victory…deserved and the cap on an incredible two weeks in Flushing Meadows, was overshadowed by multiple violations handed to Williams from chair umpire Carlos Ramos, the third of which cost Williams a game, left the capacity crowd booing, and moved Osaka one game away from her maiden title.”

Then: “Osaka capitalized on her second match point, a booming unreturnable serve to the Williams forehand. The moment was tarnished amid the controversy, with Osaka, who never once appeared nervous under the ultimate spotlight, again in tears during the trophy ceremony, during which time the American appealed for calm and called for an end to the boos.”

Imagine that. People booing when you when you get your first ever Grand Slam final.

Many people were talking about whether or not they agreed with the umpire’s decisions to penalize Williams during the match and rightly so. What got left out a lot of the dialogue was how Osaka would respond to winning in such a way. On the court, she continued to be successful, winning three more majors, including another US Open. But, off the court, it was evidently a different story.

Just imagine how you’d feel after something like this:

Osaka went on to say that anyone knows her knows she’s introverted.

“…and anyone that has seen me at the tournaments will notice that I’m often wearing headphones as that helps dull my social anxiety. Though the tennis press has always been kind to me (and I wanna apologize especially to all the cool journalists who I may have hurt), I am not a natural public speaker and get huge waves of anxiety before I speak to the world’s media. I get really nervous and find it stressful to always try to engage and give you the best answers I can. So here in Paris I was already feeling vulnerable and anxious so I thought it was better to exercise self-care and skip the press conferences. I announced it preemptively because I do feel like the rules are quite outdated in parts and I wanted to highlight that.”

Osaka went on to say that she “wrote privately to the tournament apologizing and saying that I would be more than happy to speak with them after the tournament as the Slams are intense”.

“I’m gonna take some time away from the court now, but when the time is right I really want to work with the Tour to discuss ways we can make things better for the players, press and fans,” Osaka said. “Anyways hope you are all doing well and staying safe, love you guys I’ll see you when I see you…”

Williams, who had a press conference just recently after the Australian Open, where she walked away after being asked questions on if that was ‘farewell’ to the crowd and what caused the unforced errors after ‘playing so well’ to get to that point or ‘if it was just one of those bad days at the office’, said this about Osaka’s situation:

Here’s what the French Tennis Federation (FFT) president had to say following Osaka’s resigning on Monday:

“First and foremost, we are sorry and sad for Naomi Osaka,” Gilles Moretton, FFT president, said via Roland-Garros. The outcome of Naomi withdrawing from Roland-Garros is unfortunate. We wish her the best and the quickest possible recovery, and we look forward to having Naomi at our Tournament next year. As all the Grand Slams, the WTA, the ATP and the ITF, we remain very committed to all athletes’ well-being and to continually improving every aspect of players’ experience in our Tournament, including with the Media, like we have always strived to do.”