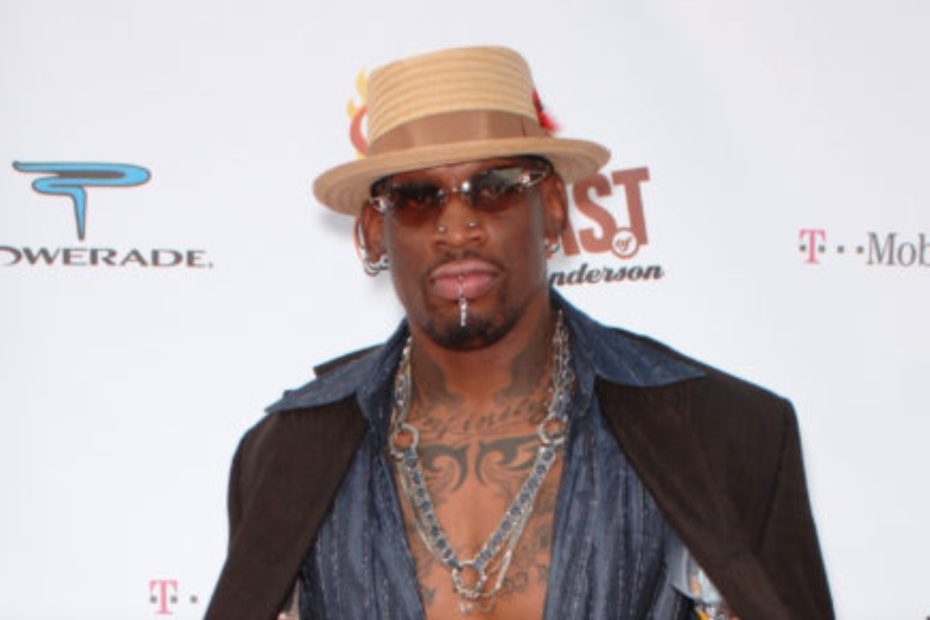 As of 2009, 60% of NBA stars go broke within 5 years of leaving the organization. Often going hand in hand with this financial stress are familial and legal issues, and oftentimes, substance abuse. With data like this, there are far more than 20 NBA players who went broke.

In recent years, special attention has been brought to this issue because of the public concern for Delonte West, an ex NBA player whose life took him down a harrowing path of homelessness and addiction. Still, we wait for the NBA to develop a program for its players to help them develop a healthy lifestyle after their retirement.

Vin Baker played for the Bucks, Supersonics, Celtics, Knicks, Rockets, and Clipper throughout his career, but has somehow managed to drive his net worth down to $500,000. This is a result of his overspending on relationships, alcohol, and bad investments.

However, after working at a Starbucks store, Baker’s life is looking up after becoming a professional basketball analyst for Fox Sports and the owner of the Starbucks store he once worked in. He even recently released his own book, titled God and Starbucks.

Chris Washburn had a BLANK year NBA career with the Warriors and Hawks and accumulated 9 million dollars before his exit from the league. His retirement came early thanks to three failed drug tests within three years. This led to a downward spiral into addiction and homelessness. Thankfully, Washburn has now been clean for fifteen years and spends most of his time focusing on taking care of his family.

Jason Caffey, who has a career history with the Bulls, Warriors, and Bucks once had a net worth of 8 million dollars. He lost the entirety of this net worth through monthly child support demands to cover 10 children with 8 different women, legal fees for an assault charge, and other various personal issues. Many of the reasons Caffey’s life has taken are consistent with that of many other ex-NBA stars: perhaps it’s time for the NBA to create a support program for the celebrities it manufactures to prevent this list of NBA players who went broke from growing.

Erick Strickland competed for the Mavericks, Knicks, Grizzlies, Celtics, Pacers, and Bucks during his 9 year NBA career. He grossed a total of $13 million, but years later found himself with nothing as a result of misplaced trust. His trusted friend claimed to have a no-brainer investment opportunity, which ultimately turned out to be a scam that cost Erick his fortune…and a close friendship.

Shawn Kemp was a popular player for the Seattle Supersonics, the Cleveland Cavaliers, Portland Trailblazers, and Orlando Magic through his lengthy and successful career with the NBA. Though he obtained around $90 million in salary alone during this ultra-successful career, he now only has about 5 million dollars to his name.

Even the massive fortune collected from his Reebok collaborations have disappeared. This financial loss is mostly warranted by the 6 separate families he owes monthly child support to, as well as his various criminal fees. It seems to be a trending pattern for NBA players who went broke to have familial and legal troubles.

Derrick Coleman represented the Nets, 76ers, Hornets, and Pistons throughout his career with the NBA. He made $45 million during his career, but lost most of it was wasted away on expensive taste and partying. To recover from his financial downfall, Coleman chose to go back to school and earn a degree.

He now works a regular job, and is a clean water and equality activist in his hometown of Flint, Michigan. Despite these admirable feats, his massive cash loss places him on this list of NBA players who went broke.

Glen Rice played for the Heat, Hornets, Lakers, Knicks, Rockets, and Clippers while he was a part of the NBA, and exited the league with over $25 million and 15 years of memories. In spite of this huge success, Rice was granted significantly lower child support payments in 2016, after claiming not to be able to afford $1,500 payments.

To the dismay of the women receiving child support, Rice insists on making a living off of his glory years, accumulating most of his income from doing autograph signings and training camps. There is no record that his financial situation has improved as of late.

Dennis Rodman was a superstar that played for the Pistons, Bulls, Spurs, Lakers, and Mavericks during a career that spanned from 1986 to 2000. Though the star earned over 43 million dollars during this lengthy career, he now only has a net worth of $500,000.

Though this may not be considered “broke” to many of us, Rodman has squandered his fortune away on misconduct fees (such as the $200,000 misconduct fee for kicking a referee in the groin) and a lavish lifestyle that he can no longer afford. Dennis Rodman is one of the most well-known NBA players who went broke, due to his unique personality and accomplishments.

Darius Miles once amassed a fortune of 1.5 million dollars subsequential to an NBA career performing for the Clippers, Cavaliers, Trail Blazers, and Grizzlies. His small fortune became endangered because of his early career start, the irrational decisions of a very young man, and a knee injury that ultimately ended his career.

Dan Issel was a loyal player for the Denver Nuggets, with whom he earned an estimated $18 million in the 70s. However, in 2010 we found out that Dan owed $4.3 million to over 34 different creditors. He was forced to auction off the memorabilia from his NBA career.

Kenny Anderson played for the Nets, Hornets, Trail Blazers, Celtics, Supersoincs, Pacers, Hawks, and Clippers throughout his career, in which he amassed a fortune of 60 million dollars in salary income alone. It is rumored that Anderson was already down to $800,000 by the time of his retirement in 2006 (15 years after his draft).

The leading factor to his financial downfall was the child support he owed for 7 children to 5 different women. With a recent history of DUIs, being fired from a high school coaching job, and a a tragic tell-all about his childhood, Anderson’s life and decisions are a prime example of why the NBA should step in and guide its players through mental and financial struggles, even after their retirement.

Mookie Blaylock, who was rumored to be exceptionally intelligent, played for the Nets, Hawks, and the Warriors. He accumulated $32 million throughout his career but squandered it on substances and legal fees. While suffering a seizure-induced from alcohol withdrawal, Blaylock caused a fatal car crash that sucked away the rest of his finances and dignity.

Christian Laettner played for the Timberwolves, Hawks, Pistons, Mavericks, Wizards, and Heat throughout a large chunk of the 90s. With these teams and consequential brand deals, he managed to amass over $60 million, yet his house was still foreclosed upon in 2015. This is largely due to investment failures and poor business decisions.

Latrell Sprewell played in four all-star games and earned $100 million during his career with the Golden State Warrior, New York Knicks, and the Minnesota Timberwolves. However, he now only has $150,000. This is mainly due to suspension for in-game violence, which led to the decline of a generous contractual offer from the Timberwolves that was valued at 21 million dollars. This concluded his career, and he now owes more money than the value of his assets. This earned him his spot on this list of NBA players who went broke.

Robert Smith, a third-round pick by the Denver Nuggets in the 1977 draft, also played for the Jazz, Nets, Cavaliers, Bucks, Clippers, and Spurs during his 7-year career in the NBA. Because Robert Smith spent all of the hard-earned money from his career, he sparked a 7-year professional basketball career in France in order to keep his finances afloat. At the conclusion of his basketball career, Smith became a sports broadcaster.

Having led the UNLV to their first NCCA Final Four victory in 1977, Smith remained associated with the school and active in many aspects. In fact, after a life-changing stroke in 2019, the UNLV basketball team has created a fundraiser to help Smith’s overwhelmed family cover medical expenses.

Jayson Williams, who performed for the Grizzlies, Kings, Heat, and Magic, collected $40 million directly from his NBA salary. This does not include brand deals and other forms of celebrity and sports-related income. After a devastating injury forced Jayson to end his basketball career early, Jayson’s life spiraled when he accidentally shot and killed his driver while showing off an expensive weapon to friends. Naturally, this ordeal has absorbed the majority of his earnings…and freedoms.

Antoine Walker was the 6th overall pick in the 1996 NBA draft following a successful time playing for the University of Kentucky, where he led his team to an NCAA championship. He played for the Boston Celtics, Dallas Mavericks, Atlanta Hawks, Miami Heat, and Minnesota Timberwolves during a career that spanned from 1996 to 2008.

He then competed for the BSN’s Mets de Guaynabo and the NBA D-League’s Idaho Stampede before announcing his retirement from basketball in 2012. It is likely that he would have been able to retire following his years with the NBA (avoiding D league at all) had he not spent his hundred million dollar NBA fortune, causing him to file for bankruptcy in 2007, just a year after his NBA championship with the Heat in 2006. Walker claims that most of his fortune was spent on gambling debts, legal fees, and overspending by his ex-wife.

Joe Smith, a 26 year NBA veteran and once the number one draft pick, played for the Warriors, 76ers, Timberwolves, Pistons, Bucks, Nuggets, Bulls, Cavaliers, Thunder, Hawks, Lakers, and Nets throughout those 16 years. With this inconsistent roster history, Joe Smith managed to earn a whopping $60 million in salary income alone.

Despite his massively successful basketball career, Smith now has a 6 figure debt thanks to his soft spot for “Love and Hip Hop” star, Moniece Slaughter, jumping from team to team throughout the final years of his career, overspending on property and cars, and a failed attempt to re-enter the NBA with a developmental title.

Bill Willoughby competed for the Hawks, Braves, Cavaliers, Rockets, Spurs, and Nets, earning a healthy $15 million to settle down with. However, these funds have likely dissipated after many run-ins with the law, despite obtaining a degree following his departure from the NBA.

Larry Johnson was a devout player for the Hornets and Knick during his years in the NBA and earned $12 million for himself in salary pay. It is rumored that he amassed an impressive $83 million when sponsorships and various other deals are included. Johnson spent most of his money on child support payments to five women, as well as various other debts he is responsible for.