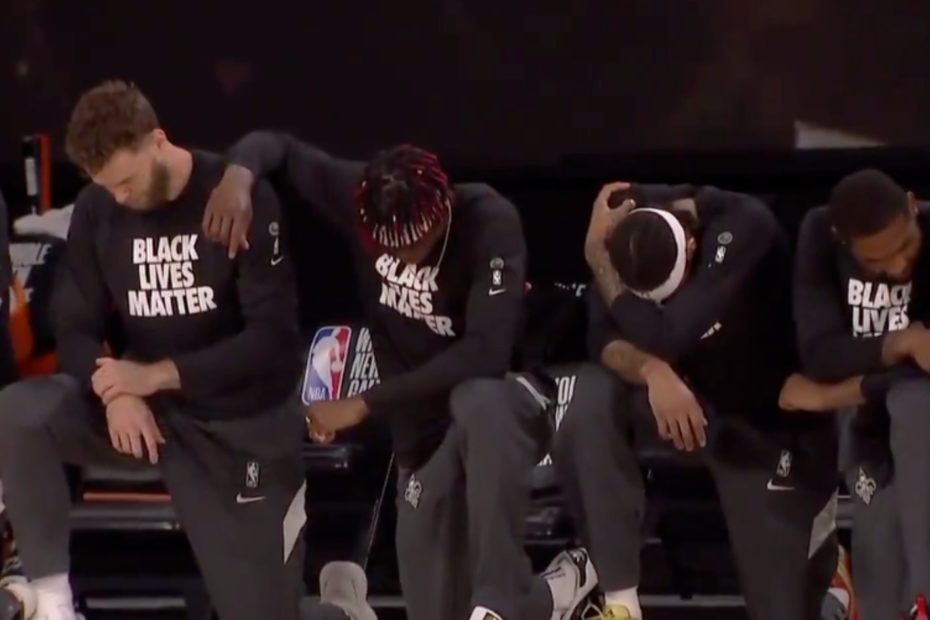 LeBron James says he hopes the NBA made Colin Kaepernick proud as their season began again. During the opening night of the NBA’s restarted season, every player and coach seen on the bench kneeled as the national anthem played throughout the arena.

As The Wall Street Journal reported the organized protest was against the NBA’s enduring policy that “players, coaches, and trainers are to stand and line up in a dignified posture along the sidelines or on the foul line during the playing of the national anthem.” A policy that has been in place since the 1980’s.

RELATED: Lou Williams Under Investigation After Excused Absence Turned Into Much More

The decision to kneel was to make sure the focus was kept on the fight for social justice and racial equality. But the protest didn’t stop at kneeling during the national anthem.

Players also warmed up while wearing black shirts that read “Black Lives Matter” and some of the players opted out of sporting their last names on the back of their jerseys for words like, “Freedom” and “Equality.”

As far as breaking the rules with their protests, NBA commissioner Adam Silver said in a statement that no player will face punishment for protesting during these “highly unusual times,” The Wall Street Journal reported.

“I respect our teams’ unified act of peaceful protest for social justice,” Silver continued in his statement, “and under these unique circumstances will not enforce our long-standing rule requiring standing during the playing of our national anthem.”

Star of the Lakers, LeBron James also talked about the protests with reporters after the Lakers beat the Clippers 103 to 101. “I hope we made Kaep proud. I hope we continue to make Kaep proud. Every single day I hope I make him proud on how I live my life, not only out on the basketball floor but off the floor.”

“I want to always speak out against things that I feel like are unjust. You know, if I’m educated on things, I’ll always go about it that way. Kaep was someone who stood up when times weren’t comfortable when people didn’t understand, people refused to listen to what he was saying. If you go back and go look at any of his postgame interviews when he was talking about why he was kneeling, it had absolutely nothing to do about the flag. It had absolutely nothing to do about the soldiers, the men and women that keep our land free. He explained that, and the ears were closed, people never listened. They refused to listen, but I did.”

As LeBron closed out his remarks, he said that “a lot of people in the black community did listen, and we just thank him for him sacrificing everything that he did to put us in a position today, even years later, to be able to have that moment like we had tonight.”

Several days ago, President Trump took to Twitter to share how excited he was to see live sports back on television. However, he also said that “any time I witness a player kneeling during the National Anthem, a sign of great disrespect for our Country and our Flag, the game is over for me!”

Following the NBA’s display last night, J.J. Reddick, who wore “Say Their Names” on the back of his jersey, was asked about Trump’s tweet. Reddick told Yahoo!, “First of all, I don’t think anybody in the NBA cares if President Trump watches basketball. I couldn’t care less.”