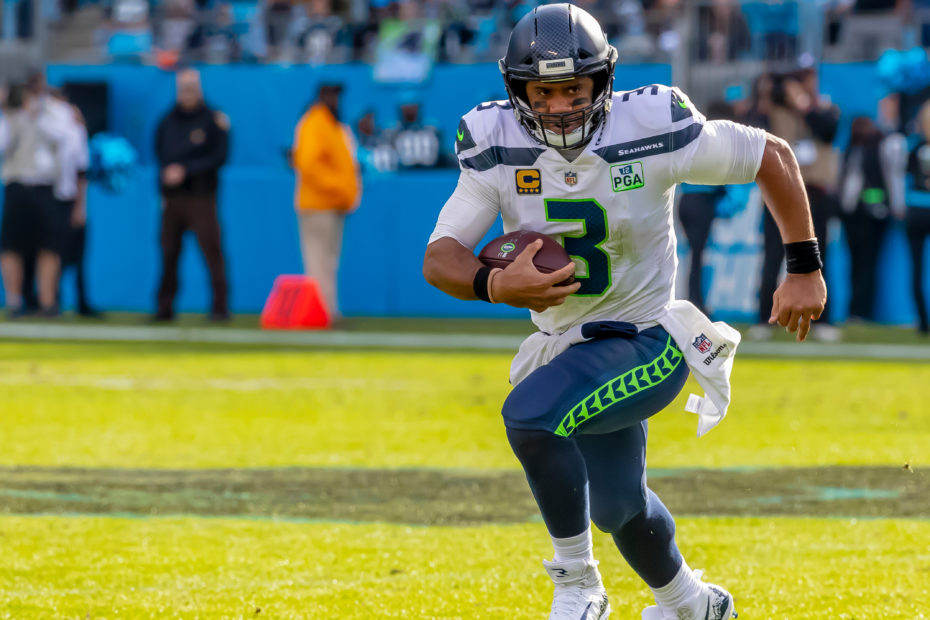 NFL Mini Camp Is Underway, Here Are 15 Star Athletes Who Will Be Wearing Different Jerseys This Year

On Monday, we got our first look at the 2022 NFL mini camp and it reminds us that we’re one step closer to the start of the regular season. Voluntary organized team activities (OTAs) came to a close last week as we’re in the third and final phase of the NFL offseason workout program.

The NFL mini camp phase is mandatory for players and while it still doesn’t include any live contact, the intensity level increases and you can see the players making strides in preparation for another season. Without the NFL mini camp, these players might risk poor play or injury.

With that said, this actually isn’t the first NFL mini camp of the offseason. The first one occurred in mid-May and was exclusive to rookies – known as the rookie minicamp. The one happening this week is different because it’s mandatory for all players – including veterans and rookies.

RELATED: Deshaun Watson & 15 Other Athletes That Found Themselves in Hot Water

As the NFL mini camp and offseason as a whole progresses, we’ll continue to get a good look at all the familiar faces suiting up for not-so-familiar teams this season. After what was one of the most exciting and suspenseful offseasons, many players got shaken up pretty good this year.

We saw trades happen where we weren’t expecting them to happen, we saw players sign with franchises that weren’t on anyone’s radar, and we even saw a certain somebody come out of retirement – albeit a quick one for Tom Brady. It was an eventful offseason to say the least.

Rosters are going to look a lot different this year when teams start taking the field for preseason and eventually the regular season. Star players are going to have different logos on their jersey and since it might take some getting used to, let’s take a look at some of the most noteworthy.

Terron Armstead is a 6-foot-5, 304-pound offensive tackle that spent the past nine years with the New Orleans Saints. For the first time in his career, he will suit up for a different team after signing a contract with the Miami Dolphins. He was a third-round draft pick of the Saints in 2013.

Armstead has been a mainstay on the Saints’ offensive line since 2014. He has recorded 93 starts in 97 games since entering the league and was named to three consecutive Pro Bowls between 2018 and 2020. He was riddled by injuries in 2021, snapping his Pro Bowl streak.

O.J. Howard is a 6-foot-6, 251-pound tight end that spent the past five seasons with the Tampa Bay Buccaneers. He left Tom Brady this offseason to join Josh Allen and the Buffalo Bills and will likely be a top-two option for them at tight end – Dawson Knox currently holds the top spot.

During his five years with Tampa, Howard recorded 119 receptions on 180 targets, 1,737 yards, and 15 touchdowns. While he has never been to a Pro Bowl and only had 135 receiving yards last year, he does have plenty of playoff experience and even a Super Bowl ring on his finger.

Carson Wentz is a 6-foot-5, 237-pound starting quarterback that is entering his first season with the Washington Commanders. This will be Wentz’s third team in as many years after spending the first five years of his career with the Philadelphia Eagles – they drafted him second overall.

Over the past six seasons, Wentz has a 44-40-1 record as a starter. He has thrown 20,374 yards, 140 touchdowns, and 57 interceptions. He threw 27 touchdowns and 7 interceptions last season, but struggled to consistently turn that into wins. He finished the year with a 9-8 record.

Juju Smith–Schuster is a 6-foot-1, 215-pound wide receiver that spent the past five seasons with the Pittsburgh Steelers – they drafted him in the second round of the 2017 NFL Draft. Over the offseason, he signed with the Kansas City Chiefs to fill the void left by the Tyreek Hill trade.

Allen Robinson is a 6-foot-2, 220-pound wide receiver that was a second round draft pick by the Jacksonville Jaguars in 2014. After four years with them, he played four seasons with the Chicago Bears before joining the defending champion Los Angeles Rams this past offseason.

J.C. Jackson is a 6-foot-1, 198-pound cornerback that was signed by the New England Patriots as an undrafted free agent in 2018. He spent the past four seasons with the team and climbed his way up to starting cornerback, but will enter the new season with the Los Angeles Chargers.

Over the past four years, Jackson has recorded 158 tackles, 4 tackles for loss, 1 forced fumble, 3 fumble recoveries, 25 interceptions, 53 passes defensed, and 1 defensive touchdown. He has 17 interceptions over the past two seasons, in which he started 28 games for the Patriots.

Khalil Mack is a 6-foot-3, 267-pound outside linebacker that was drafted fifth overall by the Oakland Raiders in 2014. After four dominant seasons, he was traded to the Chicago Bears and spent four decent years there. He was traded to the Los Angeles Chargers this offseason.

Over the past eight seasons, Mack has recorded 467 tackles, 103 tackles for loss, 76.5 sacks, 23 forced fumbles, 10 fumble recoveries, 3 interceptions, 22 passes defensed, and 2 defensive touchdowns. He’s a six-time Pro Bowler and was the 2016 Defensive Player of the Year.

Chandler Jones is a 6-foot-5, 265-pound defensive end that was drafted 21st overall by the New England Patriots in 2012. After four seasons and one title he was traded to the Arizona Cardinals and spent the past six years with the team. He now joins the Las Vegas Raiders.

Amari Cooper is a 6-foot-1, 210-pound wide receiver that was a fourth round draft pick by the Oakland Raiders in 2015. He was traded to the Dallas Cowboys in 2018 and spent the past 3.5 seasons with the team. This offseason, he was traded to the Cleveland Browns for a fresh start.

Over the past seven years, Cooper has recorded 517 receptions on 818 targets, 7,076 yards, and 46 touchdowns. He’s a four-time Pro Bowler and came third in the AP Offensive Rookie of the Year voting. With 865 yards last year, he’s coming off his worst season since 2017.

Deshaun Watson is a 6-foot-2, 215-pound starting quarterback that has been under a lot of criticism over the past year. He hasn’t played since the end of the 2020 season and despite being traded to the Cleveland Browns this offseason, we don’t know if he’ll play this season.

With over 20 lawsuits filed against him for sexual misconduct and the NFL currently launching an investigation, there’s a good chance the three-time Pro Bowler gets suspended for at least a part of this season. Either way, he looks forward to playing for his new team and new city.

Von Miller is a 6-foot-3, 250-pound outside linebacker that will be playing for his third team in the past two seasons. After spending 9.5 seasons with the Denver Broncos, he was traded to the Los Angeles Rams midway through last season – where he won his second Super Bowl.

Miller has 540 tackles, 154 tackles for loss, 115.5 sacks, 2 interceptions, 26 forced fumbles, 9 fumble recoveries, 22 passes defensed, and 2 defensive touchdowns. He joins the Buffalo Bills where he looks to win another Super Bowl with a team many consider as the favorite this year.

A.J. Brown is a 6-foot-1, 226-pound wide receiver that was a second round draft pick by the Tennessee Titans in 2019. He spent the past three seasons with the team and was ready for a large contract extension, but they decided to trade him on draft night to the Philadelphia Eagles.

Over the past three years, Brown has recorded 185 receptions on 295 targets, 2,995 yards, and 24 touchdowns. He also had 70 yards and one touchdown on the ground. He made his first Pro Bowl in 2020 and even came in third in the 2019 Offensive Rookie of the Year award voting.

Tyreek Hill is a 5-foot-10, 185-pound wide receiver that was a fifth round draft pick by the Kansas City Chiefs in 2016. He had a breakout year in 2017 and has been one of the best receivers in the league ever since. He was traded to the Miami Dolphins this offseason.

Over the past six seasons with the Chiefs, Hill has recorded 479 receptions on 708 targets, 6,630 yards, and 56 touchdowns. He also added 719 yards and 6 touchdowns on the ground. He won a Super Bowl, made it to the Pro Bowl every year, and is a three-time All-Pro player.

Davante Adams is a 6-foot-1, 215-pound wide receiver that was a second-round draft pick by the Green Bay Packers in 2014. After eight seasons with the team, he was traded to the Las Vegas Raiders this offseason because the Packers didn’t want to pay him what he deserved.

Russell Wilson is a 5-foot-11, 215-pound starting quarterback that was a third-round draft pick by the Seattle Seahawks in 2012. After 10 seasons with the team, he was traded to the Denver Broncos this offseason for a haul of picks and players. It’s the change in scenery he needed.

What Happens After NFL Mini Camp?

By the end of the week, all NFL teams will be done with their mandatory NFL mini camp and we can start to turn our attention to training camp – when things start to really get serious. Training camp usually starts in mid-to-late July, though the exact dates have yet to be announced.

After training camp, teams will go through a brief, three-game preseason before the regular season kicks off with the defending champion Los Angeles Rams hosting the Super Bowl favorite Buffalo Bills. The game will be played at 5:20pm on Thursday, September 8, 2022.

YOU MAY ALSO LIKE: 20 Unbelievable Touchdowns to Prepare for the 2022 Season

For now, let’s enjoy the sights and sounds of NFL mini camp and start to predict what each team’s 53-man roster might look like come Week 1. A lot will happen between now and then, so let’s see who knows their team the best. Don’t worry, time always flies when you’re having fun!