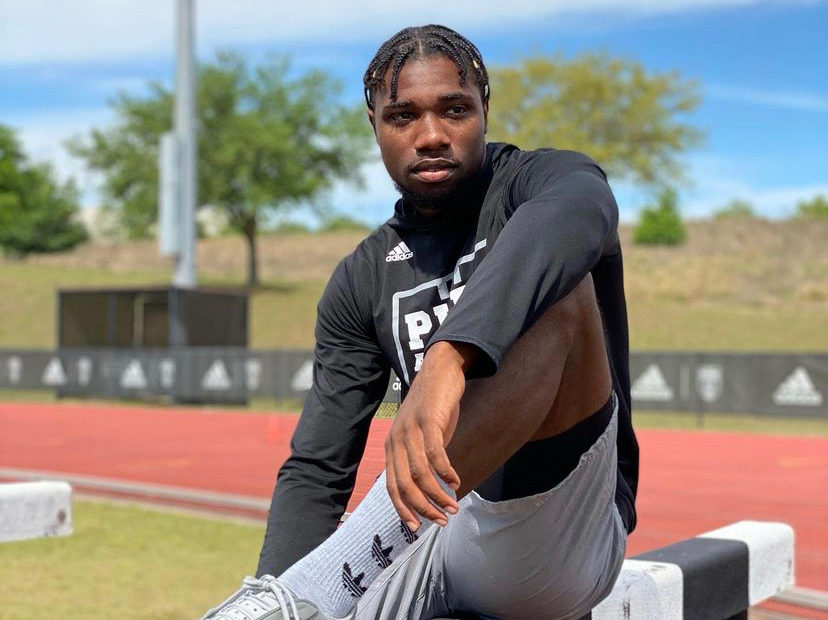 Noah Lyles Gets Emotional After Winning Bronze in 200m Final

Olympic track and field star, Noah Lyles, opened up about his mental health struggles and his road to Tokyo after he won a bronze medal in the 200m final. Throughout 2020, the Olympian discussed that the postponement of the Tokyo Games and the murder of George Floyd took an emotional toll on him; so much so that he even began taking anti-depressants.

Being very candid about his difficulties, many of the questions that reporters had directed at him after he was able to perform in Tokyo was how he coped. PEOPLE asked him in an interview how he pushed through his obstacles to which he responded, “Short answer is, I have a great team.”

Noah Lyles speaks on the importance of a positive support system.

Elaborating on his answer, the 24-year-old went on to explain, “They are very supportive and always looking out for me, even when I don’t see it,” before additionally adding the sentiments, “And then the second thing is, now I’m a fighter. And that’s how I made it this far, in fact. Just because I’m struggling doesn’t mean that I’m going to quit.”

RELATED: Professional Soccer Game Showcases a 2-Year-Old Tot Being Manhandled by Mom After Running Onto the Field!

Making his Olympic debut this year, Lyles has spoken about his strong will and dedication. The athlete offered that he’s, “very adamant that I don’t believe in really giving up or failing is not succeeding. It’s when you have completely stopped and give it up and not give your all.”

The impact of mental health awareness

The 2020 Olympics are historical for a number of different reasons. From the pandemic to the number of medals won, the 2020 Olympics are also notably one of the first years that athletes have spoken very openly about their relationship with mental health. For instance, Naomi Osaka returned to the tennis courts after a 2-month-long hiatus to prioritize herself and her needs. Additionally, Simone Biles withdrew from multiple Olympic competitions to keep herself mentally healthy. Noah Lyles believes that this point in time is a turning point for how the world views professional athletes, simply because the athletes are not hiding their personal experiences.

“It definitely is a moment where a lot of people can look back and say, ‘Oh, these athletes actually have feelings,’ ” he commented. Lyles went on to add, “Because I’ve been very vocal of, I’m a human being, I’m not a superhero, I have feelings, I have emotions. Just because I go out there and run fast doesn’t mean that I don’t come home and hurt and get tired and want to go have fun.”

The Olympian also noted the importance of understanding that professional athletes are not confined to their profession, as every person is a concoction of different hobbies, interests, and preferences. He stated, “In all actuality, we all have gifts and abilities, and it’s just we found our ability and we honed it, really worked at it. But anybody can do that. Finding your gift and honing it and putting all into it. You can do that. And of course, sometimes some gifts are praised more than others, but that doesn’t mean it’s less important.”

After his big win, Lyles was to the point of tears. Surely he was proud of his journey to the Olympics, but he also spoke with reporters after the race that he was missing his brother who is also a professional runner. Josephus Lyles, who unfortunately did not place in Team USA, was unable to be there, which apparently is an alien feeling to Noah.

“We’ve been together, forever. And we’ve now grown on this journey of making the Olympic team together. We were planning to go and make it in 2016. I got fourth. Unfortunately, he got injured that year. And then we came into 2021 and he only made to the semifinals,” said the athlete.

He also spoke generally about the absence of his family, stating, “I know that I miss sharing moments with them, especially right now, which is probably one of the bigger moments of my life. And I know they miss me too. So it’s definitely something that you want to share a moment like this, have somebody to attach to and be like, ‘We did this. We’ve been through the journey together.'”