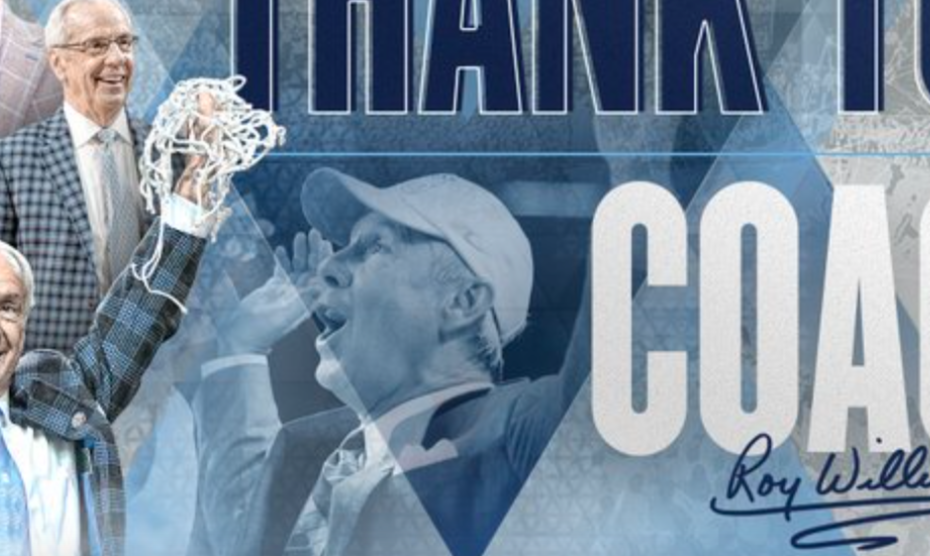 RELATED: Watch This: To Retire Or Not To Retire, That’s The True Question It Seems When It Comes To Drew Brees

According to ESPN: “After coaching for five years at Charles D. Owen High School in Swannanoa, North Carolina, Williams began his college career at North Carolina as an assistant under late mentor Dean Smith — he still respectfully refers to him as ‘Coach Smith’ after all these years…Williams’ time as an assistant included the Tar Heels’ run to the 1982 NCAA championship for Smith’s first title, a game that memorably featured a freshman named Michael Jordan making the go-ahead jumper late to beat Georgetown”.

Williams coached the University of Kansas from 1988 to 2003, with Williams racking up win after win with the Jayhawks. When he came to UNC to take the helm in 2003, it was much of the same.

Those three North Carolina NCAA championships were in 2005 (just two years after he started at UNC), 2009, and 2017 according to UNC Men’s Basketball.

The UNC Men’s Basketball program listed the following facts about Williams to show all the incredible success he’s experienced as a coach throughout the course of his career:

• 48 seasons as a basketball coach, including 33 seasons as a college head coach (18 at UNC, 15 at Kansas), 10 as assistant coach at UNC and five as head coach at Owen High School in Black Mountain, N.C.
• 2007 inductee to the Naismith Basketball Hall of Fame
• Third all-time in wins by a Division I head coach with 903
• Reached 900 wins in fewer games (1,161) and seasons (33) than any coach in NCAA history
• 903 wins in 33 seasons is 100 more than any other coach in NCAA history (803 by Mike Krzyzewski, 802 by Dean Smith)
• Second-winningest coach in UNC history and third in Kansas history
• Only coach in history with 400 wins at two schools
• Sixth-highest winning percentage (.774) in NCAA history

Yeah, this guy can coach!

Let’s hear from the man of the hour:

It is evident how difficult of a decision this was for Williams and the legacy he left at North Carolina, beyond just the success on the court but off the court, coaching not just basketball players but young men.

“It has been a thrill,” Williams said at the press conference according to ESPN. “It has been unbelievable. I’ve loved it. It’s coaching. And that’s all I’ve ever wanted to do since the summer after my ninth-grade year of high school. No one has ever enjoyed coaching like I have for 48 years.”